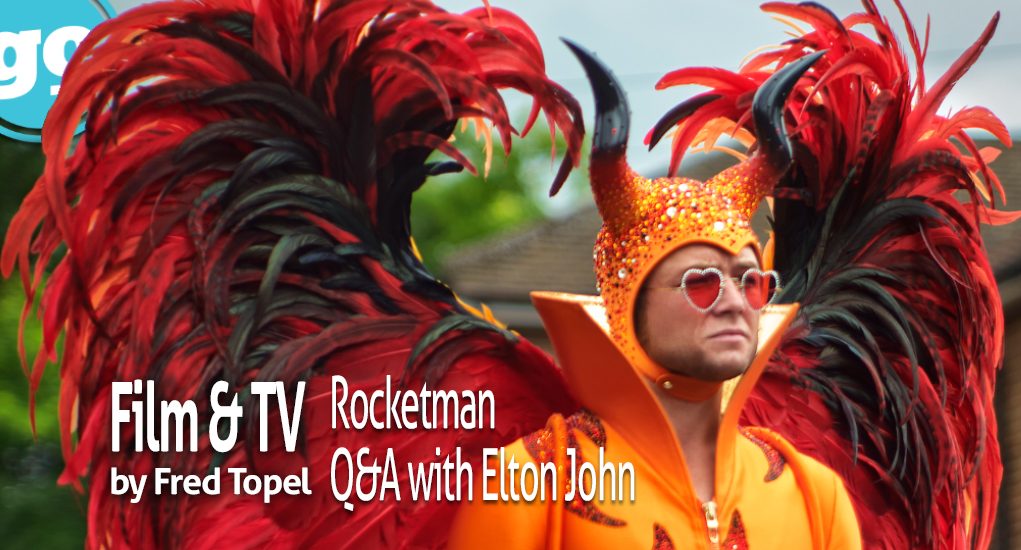 Rocketman told the story of Elton John through his own music. Taron Egerton played Elton John and sang all of Sir Elton’s greatest hits in the film. Dexter Fletcher directed Rocketman, depicting musical sequences of Elton John’s highs and lows, floating on stage as he played “Crocodile Rock,” or staging a full scale rumble to “Saturday Night’s All Right For Fighting.”

The film came out over the summer and it’s already on DVD, Blu-ray and VOD. In Hollywood, it’s now awards season which means the studios push all their big contenders to all the guilds and academies. So Elton John himself, who produced the film, attended a Q&A on the Paramount lot and Gonzo got a front row seat to hear him talk about his life and the film.

Q: When did you know you had the right ingredients to make Rocketman?

EJ: It took 12 years to get this film together. We went through different incarnations of the script, with directors. As you all know, films sometimes take that long to get together. We wanted to get it right and, as you say, we went through the first director and then the second director and then we ended up eventually with the right people. Originally Tom Hardy was going to play me. By the time things move on and he got too old, and he can’t sing. So to cut a long story short, I wanted to make the film and I didn’t want to make a PG film. I wanted to make a film that was the truth about my life. It would’ve been very easy to make a PG film and make much more money. That wasn’t the whole point of it. I wanted to get a team of people that totally believed in our vision and my vision. So it took 12 years but in the end we got exactly the right people. It’s exactly like writing a musical. A musical, you can write the songs, it may take three or four years until you get the right thing. Also, no studio other than Paramount would touch us. That’s the truth. So all kudos to Paramount and Jim Gianopulos and his team for backing us really brilliantly and making the film that we wanted to make.

Q: Was it hard to revisit any traumatic moments?

EJ: If you think the film is bad, the book’s out today at bookstores everywhere. I’d just like to say there’s a lot of serendipity on this stage. Jamie Bell came into my life through the film Billy Elliot and really have never connected with him since that film, but because of that film, I got to write the musical of Billy Elliot so he’s always stayed in my consciousness and I always followed his career. It’s very difficult for people who are young actors of that age to actually have a successful career afterwards. He’s managed that and some. It was just lovely and the serendipity of Bernie going to the office and getting the envelope. It comes with the 12 year wait. We all came together. I just think everybody in this film has such great feeling for each other because of what we did and what they did. I, of course, did nothing. I just stood back and complained. The one thing that always sticks in my mind which was so true to life with me, backstage at the Albert Hall when he says, “People don’t come to see Reginald Dwight. They pay to see Elton John.” He kind of has a little tiff with Bernie and he goes to go on stage, then he comes back and says, “Sorry.” And Bernie goes, “Yeah, I know.” It’s so powerful. It was bizarre, it was beautiful. I’m sitting here talking about something that I wouldn’t change one single frame. That I’m alive and for that film to be made and for me to say that I think is one of the most incredible things I could possibly say. The acting, the ensemble piece, everyone in the cast.

Q: What was it like seeing Taron play you?

EJ: The incredible thing about the performance Taron gave was that I never thought I was looking at Taron. I thought I was looking at myself and that was extraordinary. And he had to sing everything as well. Not only did he have to act and portray someone who’s still alive, he had to sing songs which most people, it’s very hard to cover iconic songs that people have had in their head for years and years and years and years. I found it extraordinary. Had a lot of help from Giles Martin. Giles Martin did such an amazing job and without Giles, it would have been impossible to do. When I saw Taron I was not looking at him. I was looking at me. And when I kept hearing the voice, I was hearing me but it wasn’t me but he sang so beautifully. I was always, when you write a song for a musical and you do the demo and you give it over to the cast, then you think someone else is going to sing it now. That wasn’t the case with him at all. It was just extraordinary. And the facial mannerisms, in the swimming pool, everything about it was extraordinary. I didn’t know Jamie could sing. Everyone could sing. Wow. Even Richard Madden. “Get back, honky cat!” I was f***ing floored.

Q: What did you think about the idea of making Rocketman a more surreal biopic?

EJ: That scene where I’m suspended in midair is an incredible scene because when you’re on stage and you know you’re doing well and winning the audience, that’s how you feel. It’s like oh my God. To see it portrayed in that way of me hanging in the air, I had lunch in the summer with Michael Stipe from R.E.M. and he said, “That just moved me because when you’re conquering and you’re on stage and you know it’s going well, that scene in the film just nailed it. From a visual point of view, the visual thing is how you feel as a performer inside.” That was just genius. When we set out to make the film, it was never going to be a straight biopic. There’s nothing wrong with biopics whatsoever. I thought one of the best films I saw depicting something in show business was What’s Love Got To Do With It with Angela Bassett and Laurence Fishburne which was extraordinary. There’ve been some great biopics about rock n’ roll, Walk the Line and stuff like that but that wasn’t the kind of film I wanted to make. Because my life has been so surreal, it had to have some semblance of madness because my life has been mad. When you’re a drug addict, you do the maddest things and things aren’t linear. They’re totally surreal. So it was kind of Dali-esque in a way and that’s exactly what I wanted it to be. That’s why I was even more surprised and more pleased when the songs weren’t in the right order because that’s the way I wanted it to be. I didn’t want to make the Elton biopic. I wanted a bit of strangeness about it and I got it.

Q: You had a lot more life after the movie ended. When will we see a sequel?

EJ: I don’t think you will see a sequel. We ended it at rehab and coming out of rehab because my life has been different then. There’s so much of my life since then, buy the book. It’s been fantastic and so many great things have happened but there’s enough. After the film and the book, I’m going to go away. I’m going to finish this tour. I need to go away and stay silent for a while. It just happens that the film came out and now the book’s come out and I’m 72. I want my children to read the book, I wanted them to see the film when they’re 16. “Daddy, what’s a blow job?” “It’s a man who blows up balloons at your party.” The film is done, the book’s done and there will never be a sequel to this.