Home Lori Welbourne On A Brighter Note – A reminder to drive safe by Lori... 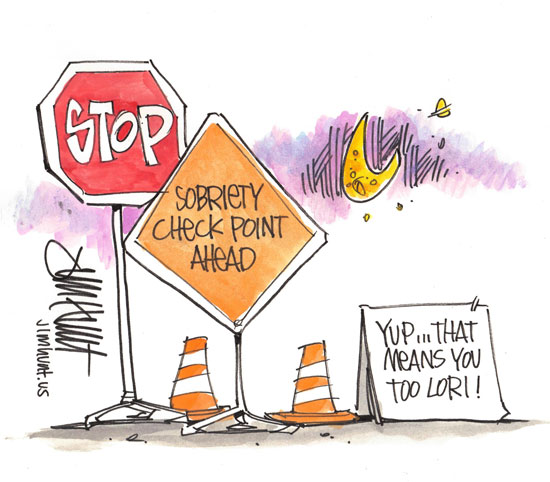 I was pulled over for suspected drunk driving last Friday night. Luckily I wasn’t drunk.

I had just exited off the highway around 11 p.m. on my way home from the gas station with milk, pancake mix and syrup and was less than five minutes from my house when I saw the flashing lights behind me.

I pulled over and accidentally drove up on the curb. I then sat there, waiting for the police officer to come to my window, hoping whomever it was would be in a forgiving mood.

“I’m sorry,” I said when he approached. “Was I driving too fast?”

“Yes you were,” he replied. “You were driving erratically and you didn’t have your lights on either.”

I excitedly told him I had a new vehicle and the lights that came on automatically from the inside made it seem like they were on outside as well. I then tried to explain my bad driving.

“Have you had anything to drink tonight?” he asked shining a flashlight in my face and seemingly sniffing my breath.

“Are you sure about that?” he asked. As I thought about it I recalled all the times I’ve heard that you should just say no to that question no matter what the truth is.

“Well,” I replied pausing, trying to remember the exact events of my busy evening. “There was this one drink. But that was a long time ago.”

“Based on what I’ve seen I’m going to need you to get out of the vehicle,” he said after a few more questions. He asked me to get rid of my gum and take a sobriety test. I suddenly felt stressed.

I knew I only drank one Mike’s Hard Lemonade at my friend’s pool party, and that was over two hours earlier, but I worried because I hadn’t eaten anything all night.

Standing on the side of the road with him and another officer we waited for a third cop to show up with the breathalyzer. As we waited I talked. And the more I talked the more drunk I seemed. Even to myself.

“Have you ever taken a sobriety test before?” Constable Arpink asked.

“Yes,” I answered enthusiastically. And then I stupidly told him how hammered I got pounding back drink after drink and blowing into the breath-taking device for a CTV News story years ago when the lower alcohol level laws were first implemented. I could tell I wasn’t making much sense. Especially since I’d just told them I never drink.

“Are you sure you only had one?” he asked. “People sometimes lie to us. If you’ve consumed anything in the last 15 minutes you need to tell us because it could affect the results of your test.”

“It was definitely over two hours ago I had that one drink,” I said trying to sound like a normal person. “Let’s do this thing.”

After the breathalyzer finally arrived and I blew into it, Constable Arpink looked at the results with a surprised expression.

“What did I blow?” I asked like an hyper little kid wanting to know the results of their grade two math exam.

“You’re fine,” he replied with a sideways smirk. “You can get back in your vehicle and wait.”

As I sat there I felt incredibly grateful that I hadn’t had more than one drink and then gotten behind the wheel like I would have done when I was younger. I also thought about how much I didn’t want to get a fine for speeding or driving with my lights off, but I was okay with whatever my penalty would be.

Fortunately for me, I got off with a written warning. Immensely relieved, I promised to turn my lights on, do the speed limit and drive my potentially fatal four thousand pound beast a lot more responsibly.

I couldn’t promise not to seem drunk though. I’m too old to be changing my personality now.

Lori Welbourne’s column runs every Sunday in eVent! She can be contacted at LoriWelbourne.com