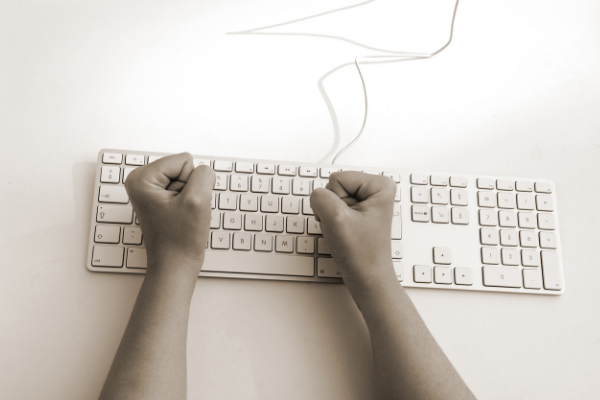 This was not supposed to happen again. I thought I’d solved the dilemma.

Today’s column is actually AWOL. It was already written and simply waiting for one more read before sending. I had tucked it safely (or so I thought) into its ‘document’ folder and went to bed, ready to give a spell-check and final perusal this morning before sending. But  it was gone.

I imagine today’s column is now spinning around aimlessly somewhere in the Ethernet or world of cyber space, I’m not really sure.

It begs the question – where do lost columns go?

Is it the same place socks vanish to? Is it in electric limbo? Is this how ghosts or those in Heaven gain access to computers? The questions are endless, the possibilities staggering. Regardless – the column was gone.

It’s conceivable I may have hit the wrong button. Lord knows it would not be the first time. In fact, when it comes to computers ANY key I hit is the wrong key. Guaranteed. However, all personal fault aside I steadfastly maintain the real problem is simply that computers hate me.

Actually the problem is much bigger than computers. Machines in general dislike me. If it hums, whirls, lights up, makes sounds, or vibrates in any way, shape or form – it hates me. If it plugs in, uses batteries, or is remote – the result is the same – catastrophic chaos. Which is not really conducive to a person who largely depends upon computers.

It’s a well known fact verified by almost any reporter or editor that ever worked with me that, “Hodge is a disaster near machines.” I swear they wait for me to arrive just so they can break down. My ability to fry a machine at a single touch is astounding and sometimes (much to my chagrin) shocking. Computers, microwaves, fax machines (a specialty for sure) coffee makers, photocopiers, record players, TV’s, CD’s, DVD’s …  the list is endless.

I have friends who will not let me touch their stuff. (At least they say they are friends).

Some folks insist machines are inanimate objects and cannot hold a grudge – but what do they know? Just because I’m paranoid does not mean that machines are not out to get me.

I have a long history of mechanical failure or electronic prejudice in my world. As a child my father would not allow me to touch or even get close to the television because it would either shut down or get static when I got close . If I reached out to turn the TV on or off or change the channel (yes kids – way, way back in the good old days remote controls did not exist and you had to actually get up and walk over the machine to change channels or adjust the volume) I’d get zapped You could actually see the electric charge.

On occasion as a teenager or young man street lamps would flicker, dim or actually quit when I walked by them.

In  my  late 40’s while on Vancouver Island the independent newspaper I was working for was bought up and shut down by a competing chain paper. Suddenly without a job I scrambled for work and found one at a business machine company. (You know where this is going). It was a disaster. I was not only supposed to try and sell fax and photocopiers, printers … but also to service them and trouble shoot.

Hilarious. I WAS the trouble. When I applied for the job I knew it was only a matter of time before things literally blew up in my face. I lasted less than three months. Almost everything I touched went from wounded to dead. Flash forward to the present.

With my history of crazy computer complications I lived in fear for the better part of the past five years while writing my book. I visioned my years of work disappearing in one giant computer malfunction gulp. I routinely bought memory sticks to back up the book as it progressed and even sent copies of chapters to Tez’s computer as well as to a friend in Ontario just in case my old beater laptop decided to eat my work at just the right moment.

My computer concern escalated about three years ago when I closed the laptop computer at the end of a nights work, but failed to remove a pencil on top of the keyboard. As I closed the top of the computer the pencil rolled to the back by the seam, cracking the plastic frame so that it would not close without danger of severing the now exposed wires. For the past three years I never closed the beast in fear it would mean the demise of my Dell.

I promised myself when the book was finally done I would treat myself to a new computer. One that worked faster than the average pudding and hopefully idiot proof. Most important – one that  would not blow up, break down or eat columns.

I joyfully purchased one at Canadian Tire (awesome staff in the Tec and sales departments) three months ago and recently felt brave enough to tackle the new brilliant beast. My spiffy new computer and I seemed to be getting along just fine and a warm and seemingly happy relationship appeared to be developing.

I was naively feeling confident. I should have known better.

In a similar nightmare to horror shows of which I’ve played lead character before – Murphy’s Law jumped up and bit my bites. I went to sleep peacefully last night knowing today’s column filled full of wise thoughts and pretty prose was ‘in the bag’. Apparently it was but it was a garbage bag.

Sure enough, as mentioned at the start, the column was AWOL.

The computer Gods are chuckling at me I’m sure.

Anyway the point of the matter is if you’re one of the people I promised to mention in today’s column and your name is not here, it’s not my fault. I only write the thing. What happens to it after that is beyond me.