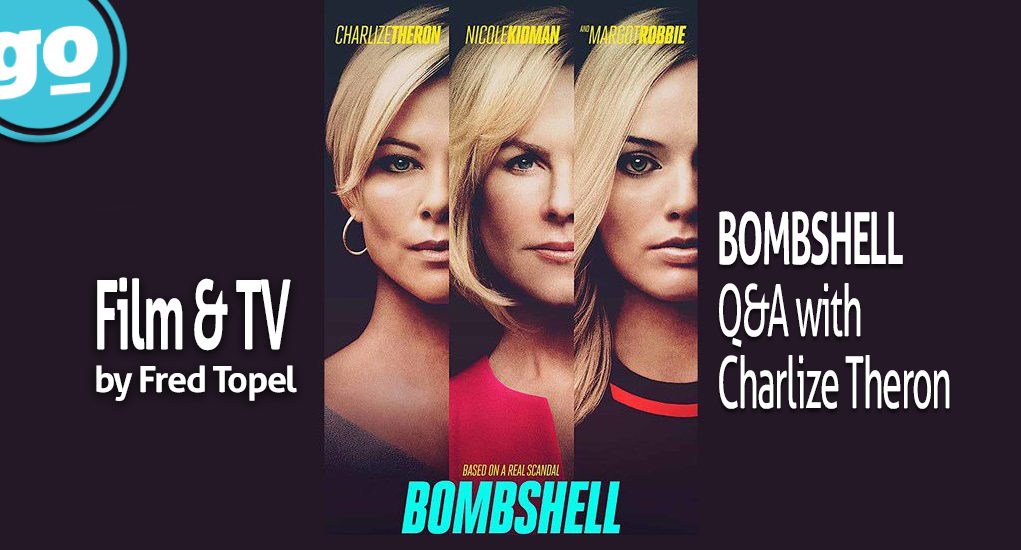 The anchors of Fox News became celebrities through their coverage of news and politics. Now Hollywood celebrities play them in the movie Bombshell. Charlize Theron plays Megyn Kelly, Nicole Kidman plays Gretchen Carlson and Margot Robbie plays Kayla, a composite character of other women who worked in the Fox Newsroom.

Bombshell tells the story of the sexual harassment claims these women filed against Roger Ailes (John Lithgow). Jay Roach directed Bombshell from a script by Charles Randolph. Theron, who also produced Bombshell, spoke after a screening of the film in Los Angeles and Gonzo was there to hear her.

Q: What was your reaction to reading the script?

CT: There was an energy for sure that felt and I think coinciding with reading the script, I realized that it was very timely and it was just breaking it down into just bare basics, The script written by Charles Randolph was amazing. We expect nothing less from Charles Randolph. I was just so impressed by the amount of research that went into it and the work that he had done. Before I read it I said to myself, “Oh, I remember this story.” And then reading it, I realized that I didn’t really remember the story and that it was way more nuanced than how I remembered it. So all of those things just got me very excited. I saw great potential.

Q: Was it a complicated film to assemble?

CT: Initially, yes, it was easy because Charles had sold the pitch to Annapurna. So by the time we came on as producers, we thought we were going to make the film with them. As we were progressing we realized that there were more asks. Two weeks before we were supposed to start shooting, we basically had to go and find our financing all over again. I was gobsmacked. I’ve never experienced anything like it in my entire life. We had put an incredible cast together and everything was really scheduled down to the hour because these ladies work a lot. So I think that was the hardest thing but we were all so together and that was the thing that was the most beautiful because there wasn’t a phone call that I didn’t make to anybody on this movie that didn’t say “We’re not going anywhere.” So that was incredible to have that as a producer. They really meant it and they were so supportive in wanting to figure it out with us. Again, the material was so good and people we got, our department heads, the actors, all of that was so enticing that our financier that we asked to step up, Bron, really stepped up within a day and Lionsgate followed right behind. So we got very lucky in that sense but again, it was because we really had something super special. But no, I don’t want to go through that again. I think I aged about five years on that day.

Q: Was there any fear of backlash?

CT: I don’t think we’ll ever know, right? I can’t say for certain that that was the case but I do think, in certain aspects of that period, there was definitely a feeling that maybe there was something more behind it than just a financial burden or budgeting, which by the way our budget was never more than what we set out at the beginning. We never went over that so look, I think that when you’re telling a story like this, you’ve got to put your flack jacket on and start leaning into it. Some people, I think this kind of stuff scares them. They might think at the beginning they’re ready to tell a certain story and then they realize there are other things that come into play. We’ll never really know truly what that was but I do think ultimately everything happens for a reason. When you make a movie, it is the ultimate experience of letting the universe just take over sometimes. Jesus, take the wheel. In this case, Jesus took the wheel and here we are today. You’re welcome.

Q: Is Hollywood making progress on these issues?

CT: I’ve been talking about this a little bit because I made a film in 2004 about a landmark sexual harassment case that happened up in Minnesota. The film was called North Country. The strangest thing happened when that film came out int 2005. The actual case took place in ’89 and people called it a period film. I was shocked by it but then went okay, ‘80s I guess, ’89, okay. But what I realized very clearly was that people liked to talk about these issues back then as something that happened before and was dealt with and that we don’t have those issues anymore. Boy, were they wrong. And I think that you’re right in that having all of these places where we now can go and actually speak up and have a voice, it’s given us power. I think that if this conversation wasn’t as active right now outside of what we’re telling as a story, I don’t know if it would have the same impact. It’s why I am incredibly optimistic as a woman because I, for the firs time, in my 27 whatever year career, I feel like I’m seeing change implemented. I’ve seen on sets, I see the way people are talking about it, I see there’s bravery in how everybody seems to want to address this, want to better themselves. This includes women. I’m including myself that we have got to change things. We really have to actively change things and when we hear all of these stories, I remember when the first wave of EMeToo movement started. I remember a man saying to me, “Oh, this is ridiculous. I mean, this is out of control. There’s so many.” And I was like yeah, dude. Yeah, there’s a lot. This sh*t’s been going on for a long time. So that’s what I would say.

Q: As an actor/producer yourself are you seeing more opportunities for women?

CT: I just recently watched Geena Davis’s documentary. It’s really great I really encourage you guys to see it. It’s eye opening because one of the statistics in that documentary says that in the real world, in workplaces, we’re actually doing better than the stories that we’re telling in Hollywood. The female characters that we actually portray in storytelling in Hollywood is actually not caught up with where we actually are in the world. In the world, we should be in an even better place. So that tells you how far away from the reality of what a woman is, what a young girl is. The fact that we are complicated and conflicted and can be just as dark and just as everything that all the men have gotten to play all these years. That’s a responsibility that I think we have to take. So whether you’re making a movie like this that obviously has a very strong message of change, or whether you’re just telling a story that has women in them, is a responsibility to stop kind of perpetuating these stereotypical things that we want to believe women are. We are so beyond the Madonna/Whore complex. I think this is the most exciting time to be making movies right now so yeah, we need more women. We need everybody. We need men to join us and that’s why we have Jay and Charles with us because we can’t do this stuff alone. I think this conversation is to be had between both sexes. We need to set it up and create women that are real, that represent us. When we go to the movies, we see women that we know because I f*cking struggle with that. A lot of women that I just don’t relate to. Anywho.