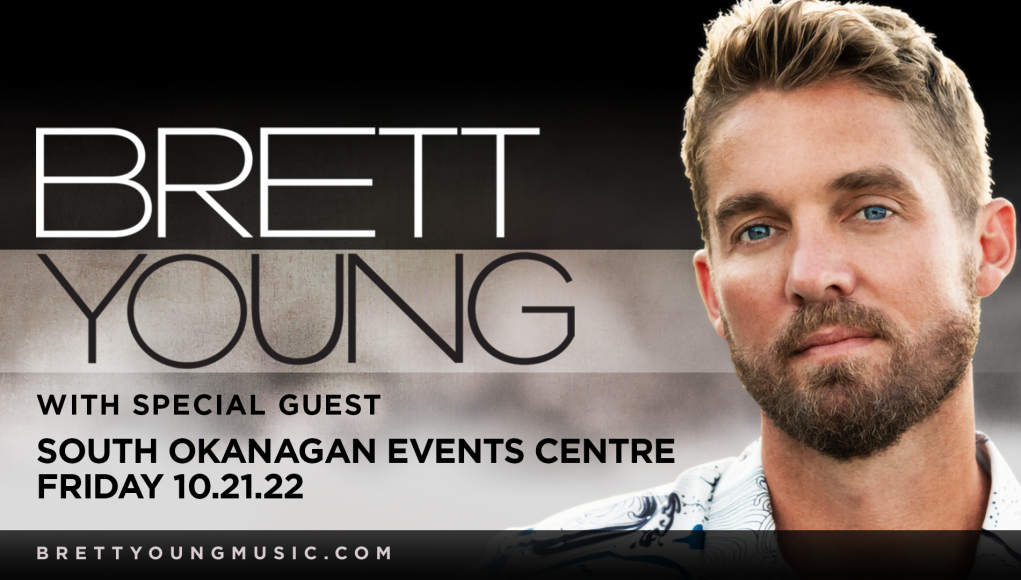 See Brett Young live at the South Okanagan Events Centre (SOEC) in Penticton on Friday, October 21, 2022. Tickets go on sale this Friday, August 26 at 10:00AM PST and can be purchased at valleyfirsttix.com or in person at the Valley First Box Office at the SOEC.

Young shared his excitement, explaining, “There’s nothing better than performing live and getting to meet the fans. I’ve loved playing shows all summer and I’m excited to continue through the fall season. Can’t wait to see everyone out there!”

This show announcement comes on the heels of a recent career milestone for Young. His hit single “In Case You Didn’t Know” was recently certified 8x platinum by the RIAA, as one of just three songs to receive this accolade since 2017. Young is continuing his success at radio with two songs currently moving up the charts, “You Didn’t” (BMLG Records) and “Never ‘Til Now,” featuring Ashley Cooke.

ABOUT BRETT YOUNG: Brett Young has captured the hearts of fans everywhere through his honest lyrics and West Coast-meets-Southern sound, aptly dubbed “Caliville” style. With an undeniable string of seven No. 1s – “In Case You Didn’t Know” (8X PLATINUM), “Mercy” (4X PLATINUM), “Sleep Without You” (PLATINUM) “Like I Loved You” (2X PLATINUM), “Here Tonight” (PLATINUM), “Catch” (PLATINUM) and “Lady” (PLATINUM) – and two albums defined by a transcendent romantic spark, he has cemented his status as Country’s master over matters of the heart. The star broadened his emotional scope on WEEKENDS LOOK A LITTLE DIFFERENT THESE DAYS, out now along with an acoustic version via BMLG Records. The project features his current single “You Didn’t” and “Lady,” whose lyrics inspired Young’s debut children’s book LOVE YOU, LITTLE LADY, published by Tommy Nelson (an imprint of HarperCollins). Young previously debuted atop the Billboard Country Albums chart with his GOLD-certified TICKET TO LA. while his PLATINUM self-titled debut dominated the Top 20 on the Country Albums chart for 37 weeks, all contributing to over 5.5 billion global streams. Young was named ASCAP’s 2018 Country Songwriter-Artist of the Year for his “melodic craftsmanship” (Billboard) and has also garnered nominations from ACM, Billboard, Teen Choice, CMT and CMA Awards as he continues to rack up nonstop hits as “one of country’s most consistent radio stars” (Rolling Stone). Alongside Shay Mooney and Bear Rinehart, Young also penned “Long Way Home (From The Motion Picture ‘Father Stu’).” a new song featured in the Sony Pictures film starring Academy Award Nominee® Mark Wahlberg. For tour dates and more, visit BrettYoungMusic.com.