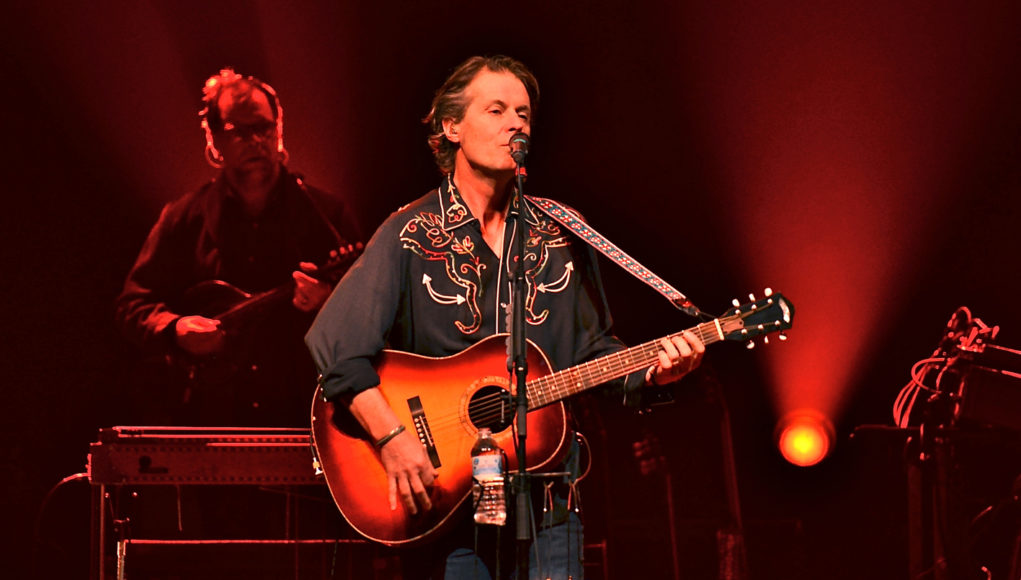 Their best-selling album came out over 20 years ago, but Canada’s Blue Rodeo still has the power to draw the fans.  Monday night’s concert at Prospera Place was the fourth date in their 28 city – 32 concert cross-Canada tour that will wind up in Montreal in March. The tour supports In Our Nature, Blue Rodeo’s 13th studio album since 1987. Original band members Jim Cuddy, Greg Keelor and Bazil Donovan were joined by Colin Cripps, Glenn Milchem, Bob Egan and Mike Boguskim.

Showing that talent runs in the family, the Devin Cuddy Band, fronted by Jim’s son, opened with a solid set of blues that warmed up the audience for the main event.

Blue Rodeo’s first set consisted almost entirely of songs from In Our Nature. The new album is vintage Blue Rodeo style with dark lyrics that will make audience members want to give it a second listen.

Blue Rodeo kicked off with the album’s lead single, New Morning Sun. The song about rising up after love and loss had an infectious beat and had heads in the audience nodding along. The crowd was tapping their feet to the travelling beat as the band followed up with Mattawa. The pace slowed with the moody Wondering which Keelor wrote to console a friend, followed by Made Your Mind Up. The band shook things up with a country-style cover of the Rolling Stones’ The Last Time, and then returned to In Our Nature with Tara’s Blues.

Cheers came up from the audience as the band trotted into familiar territory and led the second set with Diamond Mine.  The energy built and the crowd got on their feet as Blue Rodeo played Til I am Myself Again. Keyboard player Mike Boguskim shone in the most recent song in the set, 1997’s Disappear. The audience cheered at the first strains of Head Over Heels and were up dancing. Cuddy showed his powerful vocals in After the Rain, followed by Dark Angel and Girl of Mine, a song rarely performed because it was so gloomy.

Cuddy urged the audience to get up and dance to Trust in Yourself, a high energy number. The audience exploded with cheers as Blue Rodeo performed Five Days in May and they were tapping their feet and clapping their hands to You’re Everywhere. The crowd was back on its feet for the finale when Blue Rodeo had the audience sing the first verse to Hasn’t Hit Me Yet before joining in. The encore saw Cuddy belt out Try from the band’s debut album and the Devin Cuddy Band joined Blue Rodeo on stage for Lost Together.

Those who stayed a little longer were treated to a second encore of Cuddy and Keelor performing an acoustic version of What Am I Doing Here. Blue Rodeo proved they can deliver the goods after 25 years with over two hours of new and familiar music. And that’s no bull.