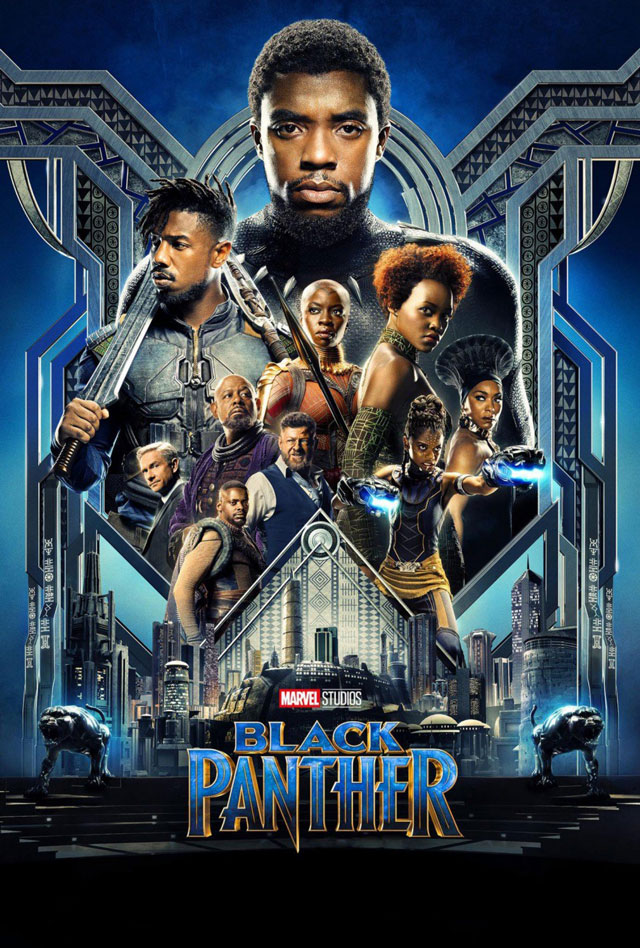 As soon as Wakanda’s prince T’Challa sprinted down the highway in Captain America: Civil War, movie fans knew a Black Panther movie would be awesome. Comic book fans have known even longer, but the king has finally come to life in Black Panther, directed by Ryan Coogler.

T’Challa has returned to Wakanda to take the throne as King. We get to see the advanced societies of Wakanda, including the warriors Okoye (Danai Gurira) and Nakia (Lupita Nyong’o) and inventor Shuri (Letitia Wright). It will take all of them to stop a villain from stealing their vibranium, the element that powers their technology, and trying to usurp the throne.

It’s a pretty impressive panel for Black Panther. There’s Coogler, Boseman, Michael B. Jordan as his nemesis Killmonger, Nyong’o, Gurira and Wright. Gonzo was at the Los Angeles press conference for Black Panther, which opens February 16.

Q: Chadwick, when you got the call to play Black Panther in Civil War, did you know what was going to happen? 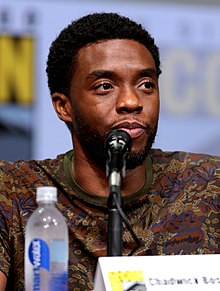 CB:  The initial phone call from [Marvel Studios head] Kevin Feige, [producers] Louis D’Esposito, Nate Moore and [Civil War directors] the Russo Brothers was one where they essentially said, “We want to bring your character into the Marvel Comic Universe as a stand-alone, but this is the best way to introduce him in Civil War.” So I was aware of it. I think when I was shooting Civil War, I was not aware that other people weren’t aware that this was going to happen, because it was such at the forefront of my mind. At the same time, I love the fact that it’s a surprise to people. We were in Zurich. I was coming off of the red carpet for Get On Up. And my agent was like, “You’ve got to get on the phone.” And the crazy thing is I didn’t even have international calling on my phone until that morning. Literally we heard somebody say, “Hey, get international on your phone. Call your mom. It’s some important stuff.” Literally, that happened that night.

Q: How badass did the women feel with your heads shaved in armor? 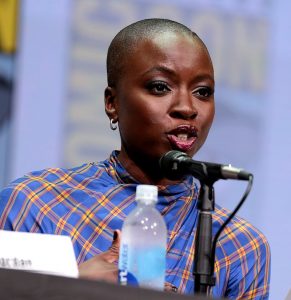 DG: I was the first one to get my head shaved. In theory, it sounded amazing.   And then the day came. So the day came and I was like, “Was it today?” I had a ‘fro, and then it happened. You go into the restroom to wash your hands, and you look up, you go, “What the….” It took a few days, and then all the girls started coming in. We’d all been balded, one by one. Everybody got their caps on and then the pride started to grow. This sort of embracing of this sort of symbol of power in these women. I loved that moment where she doesn’t want a wig. She doesn’t want to cover it. Her joy, her pride is in walking in with that bald head with that tattoo on it. It was so subversive, and it’s so subversive in the right way, to say that’s necessarily beauty.  You don’t have to have hair to be beautiful. There’s so many great things I could say about how Ryan developed these women characters, and allowed us to collaborate that I feel really blessed about, and excited. 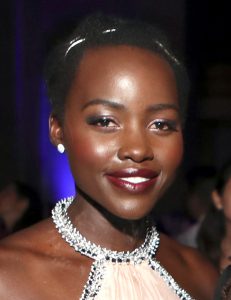 LN: Well I would say what I love about the way this film represents women is that each and every one of us is an individual, unique and we all have our own sense of power and our own agency and we hold our own space without being pitted against each other. I think that’s a very, very powerful message to send to children, both male and female, this idea. I think often times in movies we fall into that trap where women, there’s very few of us and then we are against each other. There’s a competitive spirit and stuff like that and this film freezes all that. We see women going about their business and supporting each other, even arguing with each other, having different points of view, but still not being against each other. I think that’s extremely important and in so doing, the fact that in this film there’s so many of us, we really get a sense of the fabric of Wakanda as a nation and we see women along side men. We see how much more effective a society can be if they allow women to explore their full potential.

Q: Letitia, what was your favorite weapon or gadget? 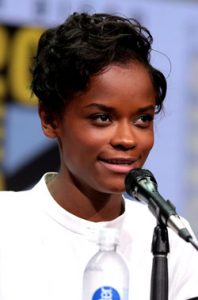 LETITIA WRIGHT: I created all of ‘em, right? I think T’Challa’s suit’s quite beautiful, but I think the gauntlet is pretty dope, because her personal little thing. It’s got like vibranium in it, like kitty-cat paws.

She does some damage.  So I loved those.

CB: When you talk about what Wakanda is, and what it would have to be in order to progress to the place that we saw, even though we’re talking about a fantasy, the idea of an unconquered nation, that has not been tampered with by the various means that it would have been tampered with, the idea of the next generation being smarter, being better than you is a concept that they would have evolved to.  So even though we’re in the same generation, she’s my younger sister, she benefits from whatever I have reached. So you want your sons and daughters to be better than you were. So that concept is a Wakandan concept, I think. My older siblings, they raised me. You see the genius that is inside the people that come after you. If you have an ancestor around, they’re looking at you like, “I know you’re looking up to me, but we’re looking up to you.” That is an African concept.

Q: How did you balance all the themes with a Marvel film? 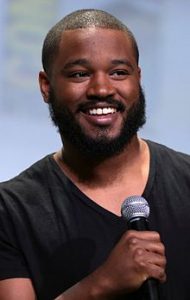 RC: It’s something that I actually like talking about, because I grew up loving comic books. I love not just comic books, but

I love pop culture. I love toys, actions figures, video games, all of that stuff. When I got older and realized that I wanted to make movies, that’s how I fell in love with internationalism, and cinema that left you with something to chew on, with something to think about. But I never fell out of love with those types of films and those types of stories. I think the best versions of those stories do both things. 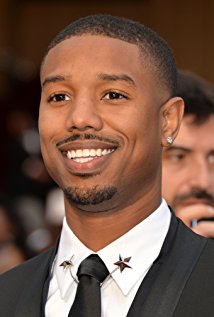 MBJ:  Yeah, I think so. I got a chance to look at some of the concept art pretty earlier on, the photos and the graphic art and what not. Nothing could have prepared us for what we saw.  We got a little glimpse of it, but to actually see it on screen fully rendered and the completed project, it was incredible and mind blowing and was really cool to look at.

DG: I think what was really fascinating and almost very emotional for me being that I’m Zimbabwean and being that’s something that you always want. You see the power and the potential of where you’re from, but you see how skewed it’s viewed by the world and how misrepresented it is and how distorted it is or received by the world so often. It’s kind of a salve to those wounds to see this world brought to life this way and to see all the potential and power of all of the different African culturalisms and aspects of our being that was celebrated and it’s so different. It’s a birth of things that we’ve been seeing forever around the continent that we see when we’re there. We see beauty, we see power, we see potential, we see ability, we see resources, but they are never exhibited and then to put it on sort of a Marvel epic scale of exhibition it’s like, it really salves wounds in a really deep way.

Q: What comic books did you pull from for the movie?

RC: We actually pulled from all of them. You can go to our film and see something in there probably from every writer that has touched T’Challa’s character in the Black Panther comics, from Stan Lee and Jack Kirby’s initial runs through Don McGregor, Christopher Priest, Jonathan Hickman. East Coast Black Age of Comics and Brian Stelfreeze’s run was a big part of it as well, so we just kind of grabbed from all. The character’s got a long history, and it’s such a rich stuff to mine. Each kind of writer kind of left their own mark on it. Klaue had been around for a long time, but for instance Agent Ross was invented by Christopher Priest in that run and Shuri’s character was invented by Reginald Hudlin in his run. So each run kind of leaves something for us to pull from, but we pulled from absolutely all of them.