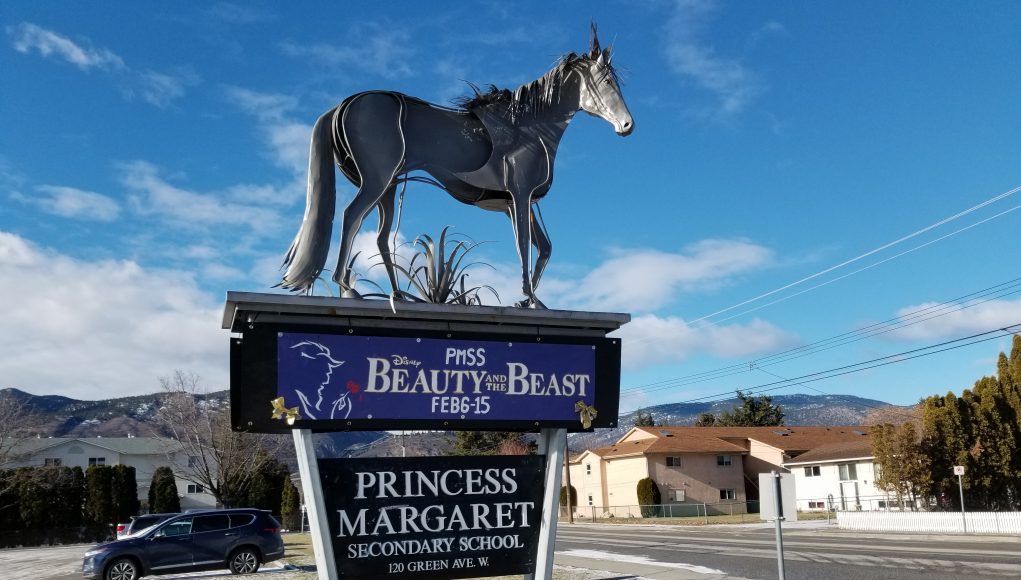 Months of hard work by dozens of students – as well as teachers and parents – at Princess Margaret Secondary School in Penticton will pay off this weekend when the school’s production of the acclaimed musical Beauty and the Beast hits the stage.

After several performances for local elementary and middle school students, the cast of close to 50 students and another dozen or so technical crew are ready to take the stage for general admission performances at Princess Margaret for shows this Thursday, Friday and Saturday evening at 7 p.m., as well as a Saturday matinee at 1 p.m.

Lori Grant, a drama and music teacher at Princess Margaret for over 20 years and director of this production of Beauty and the Beast, says the students have put in incredibly long hours since the first casting call went out during the first week of school way back in September.

Because of the popularity of the classic French fairytale on Broadway and in several film adaptations, taking on Beauty and the Beast was an easy choice, but has involved a great deal of work from not only the students, but supportive parents and other teachers at the school, said Grant.

There are more than 300 costumes that needed to be designed and an intricate set needed to be built, but everyone involved has rallied and worked hard for months to make the production a reality, she said.

“The kids in our (drama) program have a high expectation of being able to participate in their favourite shows, so I try and meet those requests,” she said. “It takes a real team effort, but we always manage to pull it off.”

Asking high school students and support staff at the school to take on a production with the size and scale of Beauty and the Beast has meant very long hours for every single person involved, she said.

“We’re all about serendipity at this level because you have to have the right people around at the right time. I tell the kids, if you work hard, I’ll work hard … and they do work so hard.”

While the music, acting and performance comes from the students, an unsung star of this production is Marnel Dekock, the mother of two former Princess Margaret drama program students and one involved in this year’s production.

“The star of the show is going to be Marnel and our costumes,” said Grant. “Marnel has the gift of being able to create a vision of what she finds beautiful and pleasant to look at and she took on the immense task of creating all the costumes and we have more than 300 for this show. She and her friends have gotten together several times a week for months hand-stitching and sewing, cutting and gluing. It has been an immense task and they have all done such a great job.”

Art teacher Brad Gibson has again taken on the task of creating the sets for the annual musical and has also done a magnificent job setting up stages for the shows at two different venues, she said.

The lead roles in this production will be played by Princess Margaret veterans Trystin Simon and belles Kaylie Deane and Grace Blais, who have all been involved in numerous productions at the school over the past few years, said Grant.

“Trystin was born to sing and he has a beautiful voice,” she said. “In playing the Beast, he is just so good and gives an amazing performance and people will really want to see this.”

Simon has been taking singing and drama lessons privately for years and hopes to continue on after high school to pursue post-secondary studies in musical theatre, she said.

“When he first came out on stage in his Beast costume, we were all just blown away … he truly embodies his character,” said Grant.

Deane and Blais are also outstanding in their roles, as is the entire cast, she said.

Having performances at the Cleland Theatre in front of the general public gives her students the opportunity to not only showcase their talents, but deal with the pressure and nerves that come with live performance, said Grant.

“Madly, we pack up everything and move it from the school to the Cleland,” she said. “Our goal is to give the kids a true theatre experience and performing in front of large crowds in a theatre like that is something you can’t put a price on.

“Most of our drama kids grew up going to performances at the Cleland and it’s going to be a real trip for them to step on the same stage where they grew up watching shows as little kids.”

The students have put in the hard work for months and Grant is very confident those attending are going to be very impressed.
“They’ve put in the work and I know they’re anxious to get on stage,” she said. “It’s always hard work, but bringing this show together has involved so much and I’m just so proud of everyone.”

Tickets for the eight evening performances and matinees are available at the front office at Princess Margaret Secondary School (250-770-7620) and Penticton’s ReStore (250-755-4336) located on Skaha Lake Road.