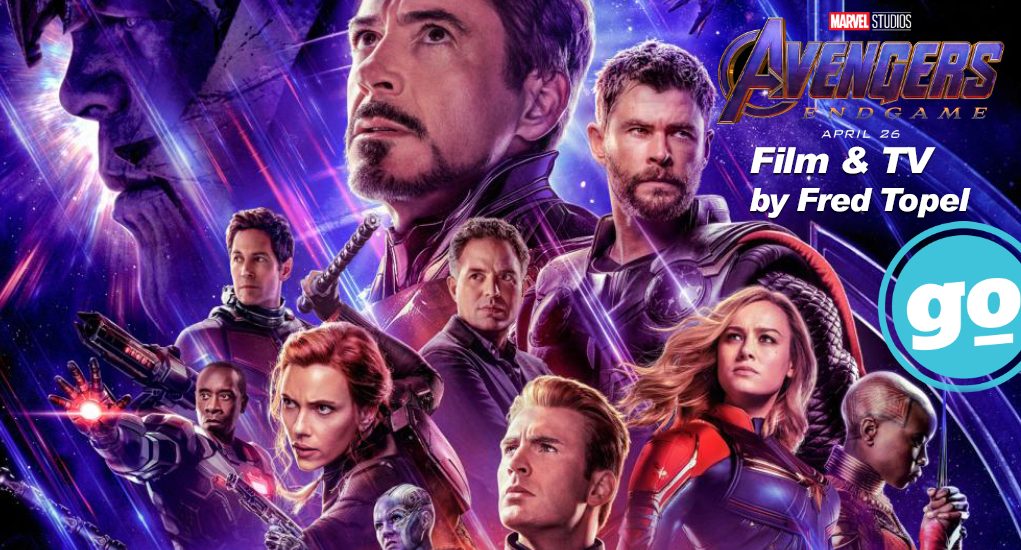 The casts of Marvel movies are always pretty tight lipped. In the case of Avengers: Endgame, they really can’t say anything. In fact, we didn’t even get to see the film before attending a press conference with the stars of the film. Still, they made it fun dodging questions and razzing each other about behind the scenes shenanigans.

Q: Was it a surprise that Iron Man amassed an audience of devoted fans, and what do those fans mean to you today?

RDJ: I’ve been just feeling like I’m kind of an oddball manny. I’ve had the opportunity to usher in this larger family. We are close and growing closer by the moment. It’s just great to — hi, Brie. What a fabulous springtime you’re having. To me, it’s just the coolest relay race in the history of entertainment, for my money.

Q: Chris, what has it meant to you to play Captain America and what do you like best about playing him in Avengers: Endgame?

CE: I think the completion of the arc. I’m allowed to say that, this movie does kind of provide kind of an endgame. There is, 22 films, he’s been through so much. I don’t know, there’s so many wonderful elements to working on this movie. Not to seem like a safe answer, but really honestly the friendships and connections I’ve made over these 10 years now. It truly has become a family,

RDJ: But you couldn’t make it to Rudd’s birthday last night?

RDJ: Yeah, I did because I said I would. You at least texted and said sorry I can’t make it.

CE: I did text message.

Q: What is the best part about playing Black Widow in this universe?

SJ: Well, the character has changed. together. Initially the character, and I was talking recently, analyzing all this whole journey that the character really started as a sort of secretary, a sexy secretary with a skill set on the set.

SJ: Posing as, thank you. I didn’t know the audience would react to the character, my interpretation of the character and obviously a very beloved character a long time. The next time we saw her in Avengers, she was sort of one of the boys, for better or worse. As, I think, the fans and the audiences have really pushed certainly Marvel but pushed all the studios and filmmakers to really throw up on the screen what represents what’s going on in the zeitgeist and want to see diverse films and casts that represents their own aspirations and how they feel. Even the character has sort of grown in reaction to that and the movies have really grown in reaction to that and the fan encouragement.

Q: Ant-Man has returned. What can we expect? How does he fit in with the Avengers?

PR: I did see the trailers. I do know that I’m in it. How I’m in it, how any of this works remains to be seen and it’s going to be fun to have audiences discover along with us. We haven’t seen it either. I must say, everyone is echoing the same sentiment which is this sense of this completion, this story but the relationships that are forged, it’s a weird thing to be hired in any job and then to get to, for someone like me, step into it as it’s already picked up speed. It’s like having the Beatles say, “Come on, jam with us for a while.” It’s an unreal sensation.

Q: What has the experience been like for Captain Marvel to join The Avengers?

BL: This film will always be personally dear to me because it was my first time playing Captain Marvel. We shot this first. So I had to stumble and try to figure out who this character was with no script for this and no script for Captain Marvel either, and perform for the first time in front of legends. But it was incredible. I think the other part of it too is the set feels like this balance of as big as it is, it still feels like a bunch of kids, just like what I was doing over summer break making movies in my garage. There’s still the sense of wonder and play, encouragement and of course this film deals with some heavy subject matters. So we were bouncing in between things that feel very deep and serious, and then we were laughing and playing Boggle which I am very good at. Just to be clear. And so there’s no other word I can describe it as other than surreal and I’m super excited for this to come out just so that I can talk about it. I can talk about my experience which I haven’t been able to do for a very long time.

Q: Rhodey has been there from the beginning. What do you like about him and suiting up as Warmachine?

DC: Well, you were there from the beginning obviously. Rhodey obviously started, I think it’s fair to say, as a lighter toned, sort of bigger than life than I am in real life. But as the character darkened and things became more compact in the narrative, I think we’ve seen a real growth in his character as he’s gone through his trials and tribulations obviously over the course of these films. To echo what Brie said, we’ve had a great time this whole time being together and having the Downey lunches that we have that he’s put together. To get to know these people, I’ve always known their work but to get to know these individuals, get to know them as people and get to be friends and to come back, to get to keep coming back to these relationships again and seeing where everybody is, who had kids and now their kid’s going to college, other people had kids, relationships started blooming. It’s rare to have that kind of experience over the course of 10 years with the same group of people so it’s been nice. And then consistently winning at Boggle, as good as you think you are. I don’t think you found avengers.

CE: Let’s be real, nobody can beat Don. Paul’s good too.

BL: I feel like I crushed the whole time. I wasn’t there.

Q: What is the most impressive Boggle word?

CE: Mark Ruffalo, who is lucky if he finds cat, found asbestos. He has nothing else but asbestos. We were flying on a plane one time, we were playing and Don found avengers.

Q: What makes Okuye such a respected and well liked character?

DG:What I love about her is that she is very unapologetic. I really got to work, collaborating with the awesome Mr. Ryan Coogler who really allowed me to imbue her with the idea that she has a good time. She doesn’t have a ring, she doesn’t have that going on. She loves her life. She loves her country. She loves her people. And she’ll do whatever it takes to take care of what must be done, and at the same time there’s a fierceness that I think she unapologetically also embraces her femininity so it’s been really fun to get to see her in all these different ways. The first day of Infinity War, when they all came to Wakanda and we were coming onto their set, we opened that tent flap and there inside were all the Avengers sitting there like oh, hi. That’s when we realized we were part of a universe.

RDJ: I vote for neither. I like Chris Evans with a beard with prosthesis over it. When we did the tag for the first Avengers. He had a beard.

CE: I was shooting Snowpiercer and I couldn’t shave the beard. They were like, “Oh, it’s okay. We’ll do prosthetics.”

RDJ: Was it worth it, buddy?

CE: Oh yeah. I love that movie. Yeah, I just thought, I mean, we’re making Ruffalo green. We can’t just lose this? But I was in the chair with prosthetics on. So we had to do the scene.

Q: How did it feel shooting the moment with Spider-Man turning to dust?

RDJ: I think we were on a set for what seemed like four years. I just love the lighting in that scene. I look so shredded. I was more shredded than a julienne salad, man. I make a lot of faces. I need some help in the editing. It’s one of those moments, it’s just the most serious thing that’s happened since you were nine. Now don’t F this up. I remember the brothers were there and we restaged it once or twice. It was crazy to shoot it. It was just in a day. We were at lunch. It’s a movie but then I think seeing it and having to see it with this amazing kid, this Scottish kid who couldn’t go to a theater so I saw it with him and his reaction effed me up. I think what a lot of us are referring to is everyone says it’s that surprise and delight experience. It’s one of those things where you go wow, we just made a pretty serious choice here. I think audiences like that.