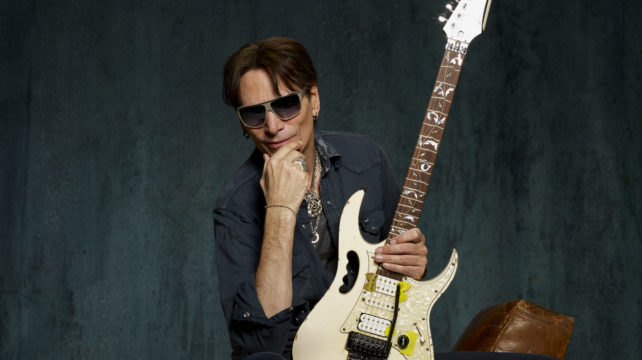 Official Website: http://www.vai.com/Official Facebook Page:https://www.facebook.com/stevevai/Official Twitter: https://twitter.com/stevevaiOfficial Instagram:https://www.instagram.com/stevevaihimself/Official YouTube Channel: https://www.youtube.com/user/SteveVaiHimselfSTEVE VAI ANNOUNCES PASSION AND WARFARESTEVE VAI’S ALIEN GUITAR SECRETS: PASSION & WARFARE INTERACTIVE VIDEO MASTERCLASS AVAILABLE NOW AT TRUEFIRE.COMVAI WILL HOST THIRD VAI ACADEMY GUITAR CAMP IN CARMEL, CA, JAN. 2-6, 2017LOS ANGELES — To commemorate the 25th anniversary of his landmark album, Passion and Warfare, Steve Vai is currently in Europe on the first leg of his very special world tour celebrating one of the greatest instrumental rock guitar recordings of all time.This fall, Vai will bring his tour to North America starting on October 8, 2016 with a performance in Riverside, CA at the Fox Performing Arts Center.  For the first time Vai will be performing the entire Passion and Warfare record from top to bottom, with some very special surprises in store.  The first 19 North American Passion and Warfare 25th Anniversary World Tour dates have been announced (see list of dates below).  These 19 concerts represent the first half of the tour.  The remaining half will be announced soon.“The enjoyment that the band is having and the audience response to the shows we are playing in Europe has taken us a bit by surprise,” Vai said.  “The collective support for the PAW 25th, Modern Primitiveand this show is humbling.  There is deep appreciation from us in having the opportunity to honor this record with this tour and we are smiling every moment of it.”The tour will feature three unique premium Passion and Warfare VIP packages: the Front Row EVO Experience, the Meet & Greet EVO Experience, and the EVO Tour Package.  With the Front Row and Meet & Greet EVO Experiences, fans will have an opportunity to sit with Steve in a Q&A session, attend soundcheck, and receive exclusive merchandise.  A limited number of EVO Experience and EVO Tour Packages will be available for each show.Sony Music Entertainment and Legacy Recordings recently released Vai’s Modern Primitive/Passion and Warfare 25th Anniversary Edition.  Modern Primitiveincludes previously unreleased material that was either recorded or written after Vai’s first solo recordFlex-Able and prior to the writing and recording of the music on Passion and Warfare.  Fans will enjoy four bonus tracks on the 25th Anniversary version ofPassion and Warfare, which was newly remastered from the original analog tapes.“The music on Modern Primitive was written and recorded with virtually no expectations for its future,” Vai said.  “As a result, there was an opening up to a powerful and personal creativity that allowed me to find the most stimulating music I could conjure.”Corresponding with the album release and tour,TrueFire presents Steve Vai’s Alien Guitar Secrets:  Passion & Warfare interactive video masterclass is now available at www.truefire.com.  During this insightful masterclass, Vai shares ingenious methods to help guitarists unlock their own personal musical identities throughout as well as revealing overviews with select playing examples for each of the songs on his acclaimed Passion and Warfare album.Vai will host his third Vai Academy guitar camp — Vai Academy 3.0 “Passion and Technique” — at the Asilomar Center (www.visitasilomar.com) in Carmel, California, Jan. 2-6, 2017 with special guests Al DiMeola, Zakk Wylde, Carlos Alomar and more.  For more information, visit www.vaiacademy.com or e-mail: info@dreamcatcherevents.com.“I can’t be more blown away by our lineup of special guests that will be joining us in January 2017 for our next Vai Academy,” Vai said.  “The theme for this camp will be focusing on technique, and going deeper than technique to find a player’s individual and unique voice on the instrument.”For more information on Steve Vai, the Passion and Warfare 25th Anniversary World Tour, and current Vai happenings, visit www.vai.com.