The Okanagan Symphony Orchestra and Music Director Rosemary Thomson are excited to announce the next performances in their O’Rourke’s Peak Cellars Masterworks series. Their upcoming Diamond Anniversary concerts, proudly sponsored by The Mission Group, will celebrate sixty years of music-making and community engagement in the Okanagan.

The very first performance of the OSO took place in Penticton in February of 1960. At the time, both Penticton and Kelowna had populations of close to 12,000 residents each, and the original bridge across Okanagan Lake had only recently been established. 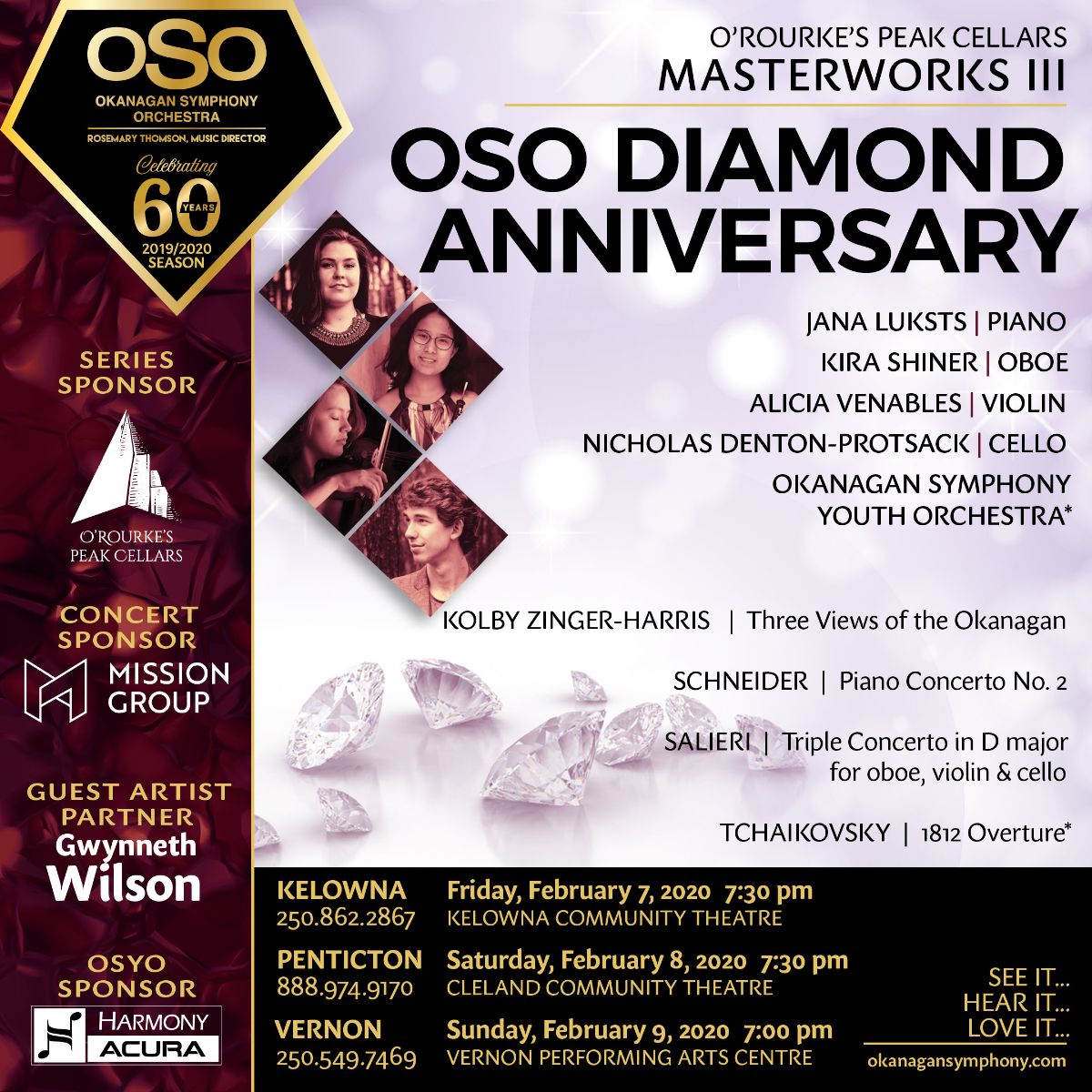 As the valley has grown, so has the OSO. In the years that have intervened, the OSO has touched the lives of many residents through their performances and community and educational activities. For these special concerts, the OSO will be uniting faces, past and present, that have had a connection to the orchestra and its programs over the years.

The Diamond Anniversary performances will feature four talented young soloists who are graduates of the Okanagan Symphony Youth Orchestra program (OSYO): Jana Luksts on piano, Kira Shiner on oboe, Alicia Venables on violin and Nick Denton-Protsack on cello. With these musicians already making their mark nationally and internationally, the OSO is thrilled to have them back on local stages.

The OSO is also honoured to feature the compositions of Penticton’s Ernst Schneider as well as young composer Kolby Zinger-Harris on the program. Music Director Rosemary Thomson says of Schneider, “We are grateful to everyone who made the dream of a professional orchestra in our valley a reality. One of those supporters is Ernst. We celebrate his 80th birthday year by performing the world premiere of his 2nd Piano Concerto. Ernst composes beautiful melodies and rich harmonies that sweep his listeners up with excitement.”

The centerpiece of the Diamond Anniversary concerts will be a performance of Tchaikovsky’s 1812 Overture. This piece will be performed by both the OSO and OSYO together, in its annual Side by Side tradition. Weeks of mentorship and preparation between all musicians will culminate in a spectacle of sight and sound with over one hundred musicians on stage.

Thomson says, “I am very excited to feature so many of our OSYO alumni as guest artists and composers. As we celebrate our history with great milestones, it is wonderful to celebrate our future by showcasing our next generation of professional music stars.”

More information about Diamond Anniversary and links to ticket purchase are also available online at okanagansymphony.com

BOYD Car Show/Cruise Hits a Bump in the Road

Tourism development in the Thompson Okanagan grows with StrongerBC investment