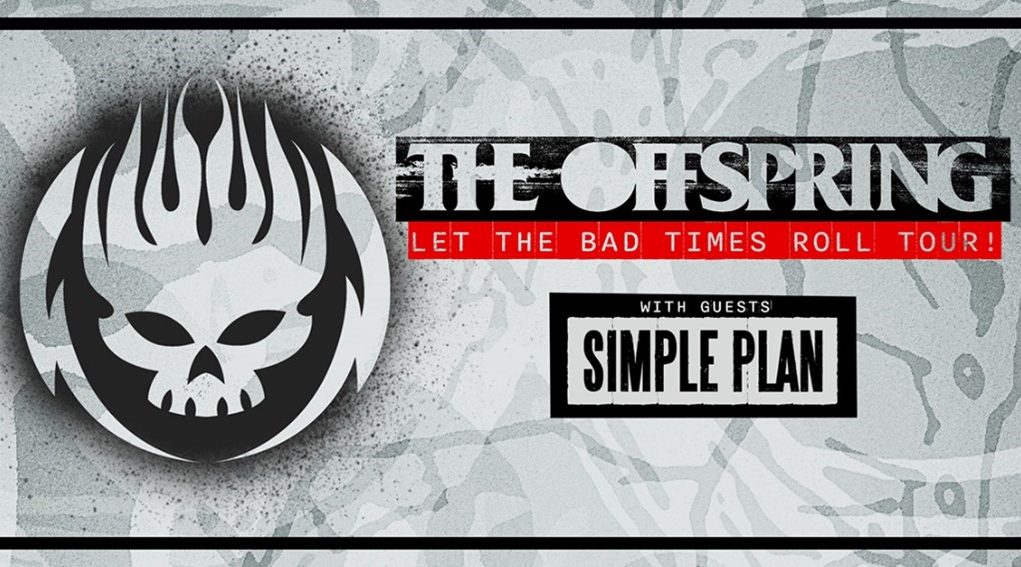 On the heels of sold out European Summer Festivals and this week’s appearance at Rock in Rio, the Offspring announced that their Let The Bad Times Roll Tour is coming to Canada in late 2022, in support of their album of the same name released earlier this year. The nationwide tour, featuring support from Canadian rockers Simple Plan, will kick off in Halifax and hit 18 cities coast to coast.

Frequently regarded as one of the best punk rock bands of all time, The Offspring have garnered a reputation for their unmistakable sound and social comment. The multi-platinum band first achieved worldwide success in the 90’s with the release of their album Smash, which sold over 11 million copies. Following Smash, they continued to release hit after hit, popularizing punk rock at a mainstream level.  Throughout their career, they’ve sold over a staggering 40 million albums, and toured arenas, and built a global fan base. Let the Bad Times Roll marks the band’s tenth studio album and third album produced by the legendary Bob Rock. True to the irreverence at the core of punk rock music, the band and lyricist Dexter Holland took a view to today’s cultural moments and didn’t shy away from creating topical material in this album. “This album is probably the most cathartic thing we’ve done,” says Holland. “The messages might be dark, but at the end what’s left is that communication is important, working through feelings is important and most of all, hope is important.”Joining the band on tour are Montreal’s own Simple Plan, who have seen no shortage of success throughout their career.  The multi-platinum, Montreal-based band boasts worldwide sales topping 10 million, along with accolades including a 2005 Teen Choice Award, 2006 JUNO Fan Choice Award, and 2012 Allan Waters Humanitarian Award. Simple Plan have remained an international sensation for over 20 years with worldwide sales topping 10 million and over 1 billion streams across all streaming platforms. Most recently the #ImJustAKid trend on Tik Tok has over 4.3 billion views and the #ImJustAKidChallenge hashtag has over 590.9 million views and counting. “We are so excited to finally be able to announce this Canadian tour with The Offspring, “ says Chuck Comeau of Simple Plan. “We know a lot of our Canadian fans have been waiting for a very long time for this and we’re absolutely thrilled to play for them all over the country. Canada is a very special place for our band, and we know these shows are gonna be amazing.”Tickets for the tour go on sale September 9 at 10am local time at www.livenation.com.Let the Bad Times Roll 2022 Canadian Tour DatesOctober 31, 2022 – Halifax, NS – Scotiabank CentreNovember 2, 2022 – Saguenay, QC – Centre George VezinaNovember 4, 2022 – Montreal, QC – Bell CentreNovember 5, 2022 – Quebec City, QC – Centre VideotronNovember 7, 2022 – Toronto, ON – Scotiabank ArenaNovember 11, 2022 – Ottawa, ON – Canadian Tire CentreNovember 12, 2022 – Kingston, ON – Leon’s CentreNovember 13, 2022 – St. Catharines, ON – Meridian CentreNovember 18, 2022 – Winnipeg, MB – Canada Life CentreNovember 19, 2022 – Saskatoon, SK – SaskTel CentreNovember 21, 2022 – Edmonton, AB – Rogers PlaceNovember 25, 2022 – Kelowna, BC – Prospera PlaceNovember 26, 2022 – Abbotsford, BC – Abbotsford CentreNovember 27, 2022 – Victoria, BC – Save-On-Foods Memorial Centre