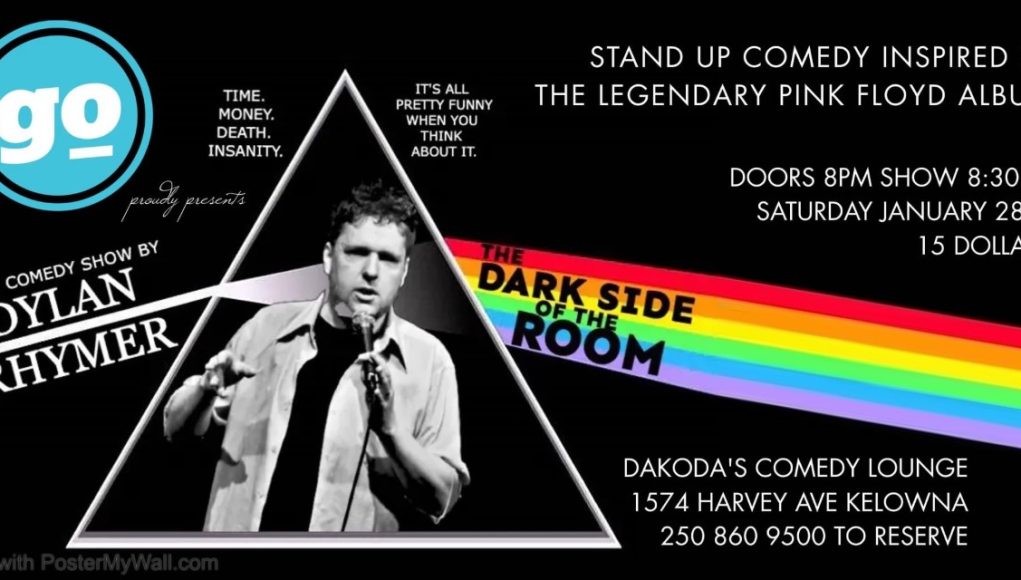 The Dark Side of the Room with Dylan Rhymer

Gonzo Okanagan is excited to present a huge night of Pink Floyd inspired comedy on Jan. 28 at Dakoda’s Pub.

Money. Time. Death. Madness. It’s all pretty funny if you think about it.

Award-winning stand up comedian Dylan Rhymer returns to Kelowna to debut his brand new comedy special THE DARK SIDE OF THE ROOM. This is a unique and hilarious show based on the legendary album by Pink Floyd The Dark Side of the Moon which stayed on the billboard charts for an astounding 491 weeks.

Released in 1973, the album turns 50 this year. Dylan Rhymer, a lifelong Floyd fan, is celebrating it with a brand new hour of stand up comedy based on the hit songs on the album.

Time. Money. Mortality. These things can either drive you insane but through comedian Dylan Rhymer’s warped mind you’ll be driven to laughter. He expertly takes us on a journey through his 25 years as a stand up comic on the road. This is not a corny tribute show, it is an hour of brilliant stand up comedy delivered by one of Canada’s best comic minds. If you’ve heard the Pink Floyd album a million times, or never at all, THE DARK SIDE OF THE ROOM has something for everybody.

Dylan Rhymer began performing comedy in clubs while still in high school. Since then he’s come a long way including his own one-hour comedy special on CTV/Comedy Network and Dylan Rhymer: Deliverance for Global TV. He has appeared on CBC’s The Debaters, Just For Laughs, Bumbershoot Arts Festival, Glasgow International Comedy Festival, Chicago Sketchfest, The Edinburgh Fringe, Brighton Fringe, Newfoundland Screech Comedy Festival and winning first place in The People’s Champ of Comedy, Western Canada’s largest comedy competition. As an actor he has appeared on Psych. (USA Network), Once Upon A Time (ABC), and The Dead Zone (Space) and has sold his soul in many commercials. He wrote and performed the character Dick Hackney, obnoxious 80’s stand-up comic, in the incredibly popular video game Scarface: The World Is Yours. Players blow his head off with large guns on a daily basis. His new album Dylan Rhymer: MACRODOSE is released on 800 PoundGorilla Records and is available on all major streaming platforms.

Thanks so much to Gonzo Okanagan for their generous support of Kelowna Comedy and the arts. Please support them for supporting us.