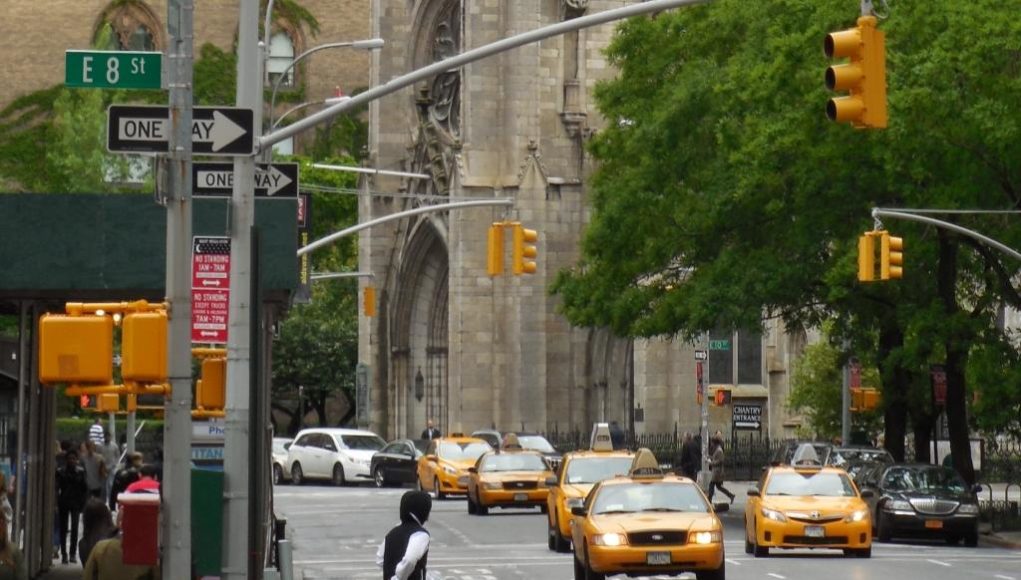 My baby girl and I got our first introduction into New York life with a taxi ride from JFK to Times Square. And if that wasn’t enough to send us running back to polite, quiet, safe home, well, nothing would be.

The system was well run — just walk out the doors, and there’s a line of cabs right there waiting. Get in line, and in two minutes, you’re in a cab with a set fare. The driver seemed pleasant enough. He put our bags in the back of the cab and asked our destination.

But as soon as we told him the address, off he sped. And he didn’t say another word. Not to us.

It became very clear very fast that, even though the car is equipped with it, the air conditioning is never turned on. 84 with the humidex, I’m guessing 95 in the cab — but no a/c. And I was afraid to ask for it. So I played with the window, up and down, up and down, depending on the angle of the wind and how combustible my menopausal flash of the moment was.

The cabbie honked, swerved, cut other vehicles off, rode on the shoulder, sped and braked and swore and gestured.

Beautiful classical music — Schubert I believe (yeah, like I could tell that from Mozart or Bach) — blared from the radio, sometimes the rise and fall of the piece mirrored the harried start/stop pace of the cab itself. This apparently angry man listened to classical music and air-conducted with his hand on the stick of the automatic shifter. We theorized (once our feet were firmly planted on safe New York asphalt) that the music kept him sane. Visions of his driving without its soothing effect chilled my spine.

We quickly learned the trick to hailing a cab in New York. Look for the cab number lit up on the roof — because if it’s unlit, you look like a tourist hailing a full cab. Which you are. Stand on a corner, because if you are in the middle of the block and the driver nods at you then has to stop at a red light, someone else will jump in and steal your cab. And he’ll let them.

Step off the curb and into the street, look the driver right in the eye, and stick your arm up like you damn well mean it. By day two, getting a cab was a breeze.

The back seat of each cab is equipped with a small screen which plays an incessant loop of advertising and “taxi news.” We soon found the mute button, but also theorized that the screen kept bored New Yorkers, who weren’t gawking at the sites like us tourists, from losing it in the mad rush of the daily grind. The screen was also a handy payment device. Just navigate the touch screen to pay for your ride with the swipe of a credit card. That and the Plexiglas window made speaking to the driver completely unnecessary. All of the cabbies had similar driving, and identical social, skills. By the end of our six day visit we were accustomed to it, even thankful that the last one we hired got us to the airport in time by abusing more traffic laws than I could count on two hands. Hurray for seat belts and our new found nerves of steel.

Those who know me well know that I’m pretty shy in person. For the past couple of years I’ve been challenging myself to change that. Talk to strangers, make eye contact with strangers. Yeah, it’s all about strangers. Once I know you, I won’t shut the hell up. On this trip I continued with that challenge, engaging every server, every shopkeeper, every hotel staffer.

Part three will explore the question, “You call that art?”