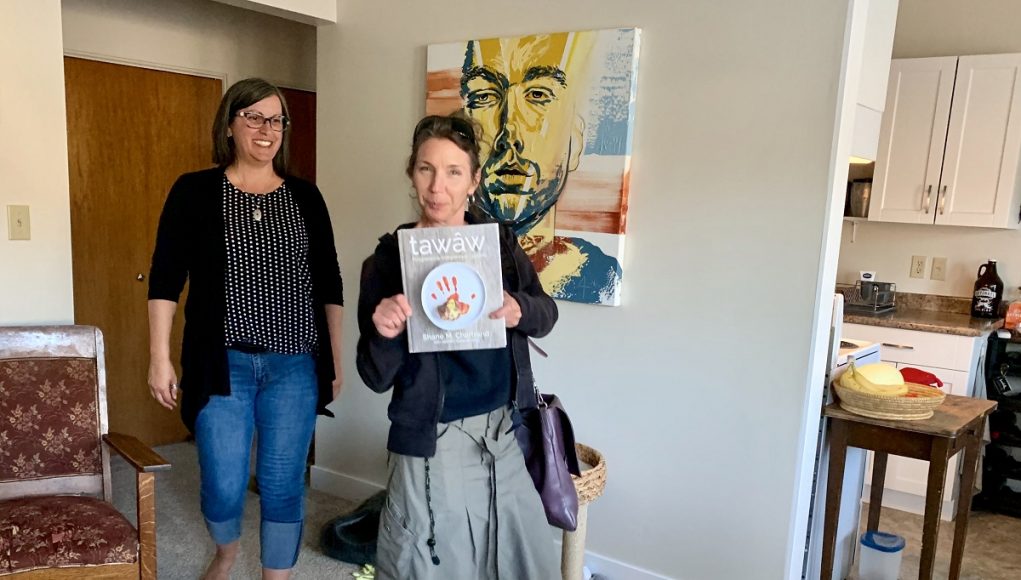 The house is quiet now with a few lingering wafts of breakfast aromas adding comfort to the cozy living room. Tears are welling up as still clad in pajamas, I devour this cookbook.

That’s right. A ‘cookbook’ is making me cry. Moreover, it is inspiring me to read it cover to cover. 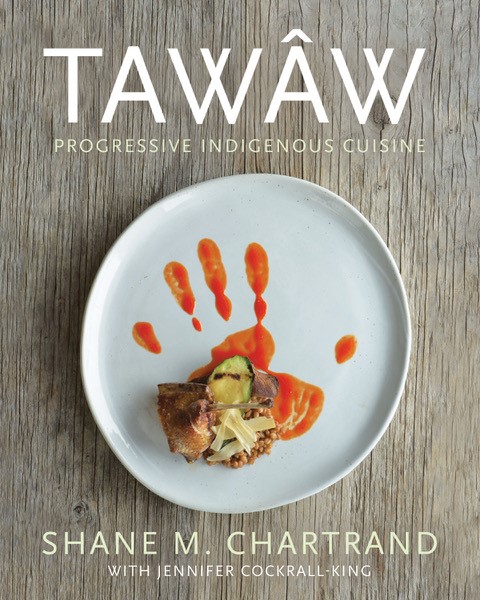 By Shane M. Chartrand with Jennifer Cockrall-King, tawâw: PROGRESSIVE INDIGENOUS CUISINE isn’t ‘just a cookbook’ although in my world, sometimes cookbooks are ‘everything’.

Published by House of Anansi Press Inc. in Canada and USA in 2019, the recently launched cookbook is beautiful aesthetically and altruistically.

The inside front cover (By the way, I love that this space is lovingly used.) states:

Born to Cree parents and raised by a Métis father and Mi’kmaw-British mother, Shane M. Chartrand has spent the past fifteen years learning about his history, visiting with other First Nations peoples, gathering and sharing knowledge and stories, and creating dishes that combine his diverse interests and express his unique personality. The result is tawâw: Progressive Indigenous Cuisine , a gorgeous book that traces Chartrand’s culinary journey from his childhood in Central Alberta, where he learned to raise livestock, hunt, and fish on his family’s acreage, to his current position as executive chef at the acclaimed SC Restaurant in the River Cree Resort & Casino in Enoch, Alberta, on Treaty 6 Territory.

Containing over seventy-five recipes — including his award-winning dish “War Paint” — along with personal stories, interviews with Chartrand’s culinary influences and family members, and contemporary and archival photographs of his journey, tawâw is part cookbook, part exploration of ingredients and techniques, and part chef’s personal journal — a visionary book that will invite readers to leaf through its pages for ideas, education, recipes, and inspiration.”

I will declare up front I’ve had the pleasure of meeting Chef Shane Chartrand in person and watching him compete in the 2018 Canadian Culinary Championships: Gold Medal Plates in Kelowna.

Additionally, Jennifer with whom he entrusted his full story to assist him in sharing it more broadly is a dear friend and colleague of mine. So, as the story unfolds for me, it is personal. That said, the story is so well told and the cookbook so attractive I believe it could be deeply moving for any reader.

The book design by Alysia Shewchuk and the photography by Cathryn Sprague with some images by Jennifer and other contributors is exquisite. It’s exactly the type of book you’d want to display on your coffee table or give as a gift.

The foreword by Marlene and Laurie Buffalo of the Samson Cree Nation, Treaty No. 6 Territory, is heartfelt and honest, thus, preparing the reader for the journey ahead. Marlene calls it “an act of reclamation leading to the revitalization of your taste buds for Indigenous cuisine”.

Laurie describes how getting to know Shane made her start to “really look at what food meant to me, what it meant to” her family and Cree way of life.

I knew Jennifer set aside many other writing projects to help Shane tell this story. To me that is the essence of being a writer. Telling the stories of lives in the best way possible. Shane’s story would not be complete without tracing his history, without talking about people who have influenced him nor without including his recipes because these explorations define him.

Prior to reading the book, I listened to his interview with Kathleen Perry on CBC Radio The Current. (You can find it here) I was charmed by Shane when I first met him, still, it was this interview that clarified for me why Jennifer was compelled to work with him on this cookbook. His kind soul and quest to gain and share culinary and Indigenous knowledge shone through his candid responses.

Shane dedicated the book to his Mom and Dad who adopted, raised and supported him and shared their unique strengths with him. Excerpts from each tell us a bit about their perspective on him. Shane also included this dedication to his friend (and mine) and co-author Jennifer, “You brought the world of books and words to me and have been part of this journey for years.”

If it weren’t for fear of hexing it, I’d say the book should be mandatory for all interested in examining North American history. Instead, let me say that the cookbook is deeply entertaining combining elements of historic truths that are sometimes difficult to accept with a delightful story of a young person finding a calling in the culinary world.

It’s a lesson to all that cuisine, whatever its cultural base, is evolving. Indigenous cuisine need not be a snapshot frozen in time rather an organic process of advancing. To flesh out this progressive approach, the cookbook contains guest appearances and other educational excerpts.

Learn about the diabetes crisis in the indigenous population, about Pow Wow, Hand-poke tattoos and the responsibility around tattoo, climate change and diet, Shane’s coping skills with fear and anxiety, emotion and risk, and complementary flavours based at times on the animal’s diet. Meet Cowboy Smith, REDx Talks founder, Blackfoot filmmaker/artist from the Piikani and Kainai Nations on Treaty 7 Territory in Southern Alberta. Meet chefs with whom Shane went to culinary school, farmers and others of influence to him.

Attention to detail includes a comprehensive table of contents, a note on language, foreword, recipes divided seasonally with a recipe index, an overall index, pantry staples, afterword and acknowledgements. Throughout the importance of certain Indigenous ingredients such as bison are addressed along with the debate on bannock.

In reviewing it, I’ve scratched the surface of what’s contained within tawâw. I’ll be cooking from it and using it as a resource. Thank-you Shane and Jennifer, the actualized dream is beautiful.

Featured photo: The excitement as Jennifer Cockrall-King arrives at a friend’s with the book hot off the press.