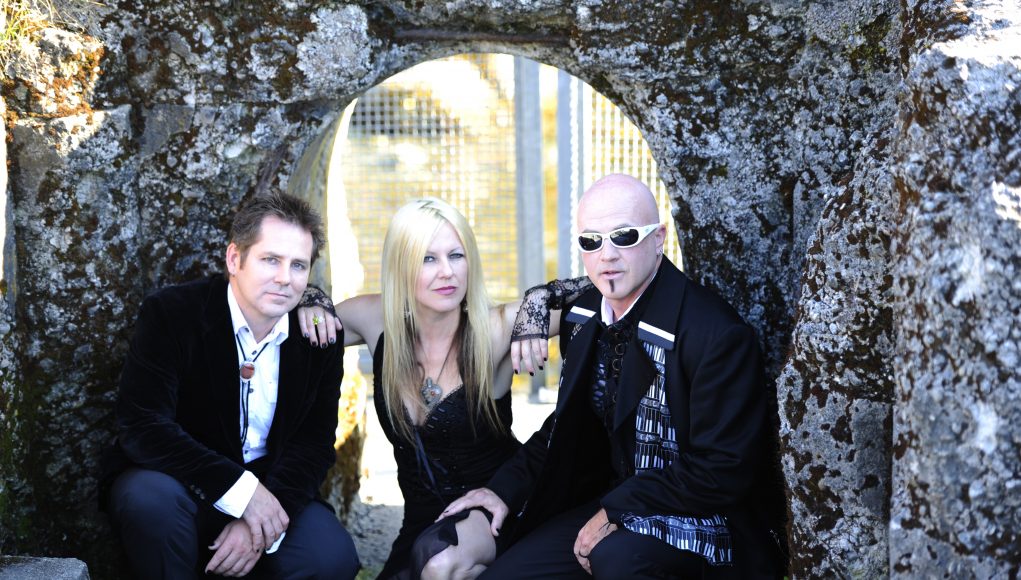 While Vancouver’s Stone Poets were founded in 2011, Saturday night was the group’s first appearance in The Dream Café of Penticton. The venue is beloved broadly by musicians in the know about great rooms in which to perform and by music lovers aware of the intimacy of the setting. The Dream Café was a perfect fit for the charming and talented trio.

They offer three distinct voices that harmonize beautifully to present the band’s take on the song, in a style that has been described as “contemporary folk”. The instrumentation of keyboard, two acoustic guitars and harmony laden vocals leans to folk music. With the songs venturing into subject matter “other than country roads and maple leaves, there is also a contemporary/adult alternative tone. At The Dream Café, the set list waded into rock periodically and truly had the room clapping and tapping.

When you consider in addition to Stone Poets, Gladstone is currently playing with “Prism”, “Abandon Paris” (previously “Brandon Paris Band” – “Rewind and Start Again” hit #17 on CHR charts), and Ajaye Jardine”, the rock component isn’t surprising. He played with “Doug and the Slugs” from 1998 until 2005, often performing to audiences over 20,000. His extensive musical experience having played piano/keyboards since age seven serves as the anchor of the music and melody.

Writing and recording since 1995, Jardine has released 12 CDs including her solo albums, The Jardines, Stone Poets and her latest band HEAD. She is Marketing and Promotions Manager of Pacific Northwest Radio and hosts a radio show called Make a Scene Canada. Check it out Tuesdays at 7 pm PST. http://www.makeascenecanada.com For her work in the arts, she was honoured with the Ethel Tibbits (woman of distinction award) in March 2011, and The Richmond Art Award in 2012.

With Jackson’s background in English literature, specifically in Elizabethan poetry, “a somber and moody heaviness” is added to the lyrics. His extensive songwriting experience includes a solo career with the release of two CDs titled “My World” and “Distractions”. Plus, he recently joined Gladstone in the rock/reggae band “Abandon Paris”.

For those of us new to the band, we learned that all three are great storytellers in addition to songwriters. The first set included: We Dance; Evenstar; Run Away; 5 Days in May (Blue Rodeo); Unintended (Muse); Gleam & Beam; I Wish; Something I Don’t Want; and Come Down with a lot of banter that included family and personal friends of the band. It was clear the three are highly approachable and fun-loving. The cold medication Jardine was taking possibly embellished her quirky humour, however, it didn’t interfere with her gorgeous voice. I loved Stone Poets’ rendition of the Blue Rodeo popular 5 Days in May and how the band engaged the audience to join in with that and any other covers performed.

During the brief intermission, the band didn’t really take a break rather mingled with the audience. One of my group, for instance, had known Jardine for years and she made time to come to our table and meet all of Leanne’s family and friends.

The second set included: Better; Wait; We Bleed; Shout; Great Divide (written with Canadian iconic songwriters LeeAnn and Daryl Burgess); No Sugar (The Guess Who); Talk to Me; and Carry. For the encore, Stone Poets performed the cover song for its most recent release.

The Dream Café did not sell out for this first appearance of the Stone Poets in Penticton although I’m sure it will in the future. The evening went by quickly and I left the venue with my heart full of inspiring tunes and thoughts-provoking insights. I’ll be adding Stone Poets to my playlist. To learn more about this engaging group, see stonepoets.ca

If you’ve never been or not attended an event at The Dream Café, I urge you to check out the Shows & Tickets tab at thedreamcafe.ca It has a maximum capacity of about 110 which provides a truly “up close and personal” opportunity to watch fine performances.

I never cease to marvel at the acoustics in this small room and the quality of the onsite sound engineering. General Manager and Booking Manager Hazel Bennett has a fine ear for music and consistently succeeds in filling the schedule with remarkable performances, both encore and debuting acts.

Arriving early at The Dream Café for a bite of dinner before the live performance makes for a memorable evening. It also offers a thoughtful list of local wines, ciders, beers and spirits or if you prefer, non-alcohol selections.