A butterfly-friendly balm for turbulent times

In these turbulent political times, inspirational stories are more important than ever. Here’s one about how people power is fuelling a surprising comeback. It starts with a quiet disappearance that gradually builds to a historic wave of orange. And it may offer a balm for the seemingly endless barrage of negative news. 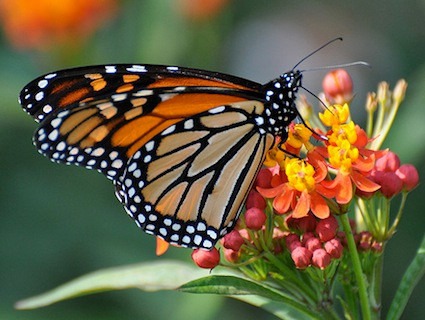 Folks in Eastern Canada may have noticed something joyous in the air this summer: an abundance of monarch butterflies. After a couple of decades of decline, it appears monarchs had a great summer, culminating in an unusually strong migration over the past few weeks, with ribbons of orange “500 miles wide” flowing southward.

The return of monarchs is great news, because only four years ago their situation looked bleak. The eastern monarch population had plummeted from one billion two decades before to only 35 million.

The dramatic decline spurred the David Suzuki Foundation’s first #Gotmilkweed campaign. The Foundation offered milkweed plants, which monarchs require for survival — although there was some uncertainty about how many customers would be interested in this particular type of “weed.”

Canadians’ collective love for monarchs and the urgency of their plight translated into brisk sales, though, resulting in the Foundation distributing more than 30,000 milkweed plants and a half million seeds. Milkweed mania spread throughout the rest of the monarch’s northern range, from eastern Manitoba to the Maritimes, with countless groups and individuals adding milkweed and other butterfly-friendly plants to gardens, schoolyards, parks and roadsides.

City governments have also taken flight. Markham became the first monarch-friendly city in Canada. Toronto became the largest city in North America to sign the Mayors’ Monarch Pledge, while also adopting one of Canada’s most ambitious pollinator strategies. More than a dozen Ontario communities and nine municipalities in Quebec have all joined the growing movement to bring monarchs back. Butterflyways have also been established in Richmond, the District of North Vancouver and Victoria, B.C., to help butterflies and pollinators there.

Milkweed can now be found in many garden centres and nurseries in Toronto and elsewhere, and an observant neighbourhood wander commonly includes a few patches of milkweed. The transformation of milkweed from noxious weed to Eastern Canada’s most in-demand native plant in a few short years is nothing short of inspirational.

But we still wondered if the monarchs would come back.

One of the biggest drivers of monarch decline is use of the herbicide glyphosate (a.k.a. Roundup) that has eradicated milkweed on millions of kilometres of cropland along monarch migration routes. Extreme weather is monarch enemy number two. Severe droughts can cause havoc and winter storms can wipe out tens of millions of monarchs. So, even if we plant a ton of milkweed, monarchs won’t be out of the woods.

This summer, though, has been epic. The migration northward was strong and our summer weather was ideal from a monarch’s perspective. Renowned monarch researcher Chip Taylor at the University of Kansas has suggested this winter’s population may be the strongest in a decade.

Although the future of monarchs remains in peril, we should savour the wonder of these butterflies and celebrate the collective impact that thousands of gardeners, Rangers, citizens, businesses, bureaucrats and politicians can have when we dig in.

These efforts offer a glimpse of how the unexpected can happen. Despite weighing less than a paperclip, monarchs fly 4,000 kilometres to forests they’ve never been to. Despite decades of being unloved and eradicated, a plant like milkweed can be popularized. Despite being on the brink of extinction, monarchs can be plentiful. And despite our messy political landscape, we can alter the landscape of our neighbourhoods, making an effort to bring a bit more nature home to our gardens, yards, schoolyards and parks.

So, before the next political bombshell plunges you into despair, I urge you to take a deep breath. Smell the flowers. Reconnect with the wonders of nature. And remember that we can all bring hope and joy, one small step at a time.