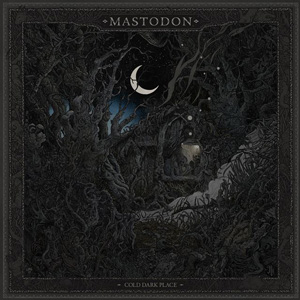 Here is a 4 song e.p. from Atlanta’s Mastodon.  Available now on CD and via digital release (with a 10” vinyl picture disc due October 27th), this is a surprisingly textured little melodic adventure.

Produced by Nick Raskulinecz (Rush), these 4 songs are leftovers from the sessions for 2014’s Once More ‘Round The Sun, which I haven’t listened to in quite some time. This seems to be taken from the Metallica playbook- they released Death Magnetic in 2008, followed by the Beyond Magnetic e.p. with 4 leftover tracks in 2011.  Heavy metal yes, but in the classic, bluesy sense; these tunes sound like they would’ve been at home on your turntable in the mid 70’s, as opposed to mixing with the many sub genres (black metal, grind core, death metal) that pass for metal these days.

The songs on Cold Dark Place would’ve fit well on ‘Round The Sun stylistically but that would’ve made the album nearly 80 minutes long, and that’s just too much by anybody- even if you love them to bits.  If you’re really into Mastodon I recommend getting this e.p. and mixing the songs in with Once More ‘Round The Sun for the ultimate play copy for the car- that’s what I’ve done. 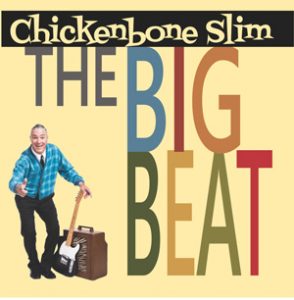 This is the 2nd album for a guy you may not be familiar with.  Chickenbone Slim played bass and sang for San Diego bands for many years, not picking up the guitar until 2011.  His band, The Biscuits, has been together since 2013 and boy do they know their blues!

To say The Big Beat is a product of destiny is an understatement. Chickenbone had planned a short tour in the Bay area, but found himself with two gigs 4 days apart and nothing to do in between.  Kid Andersen, guitarist for Rick Estrin & The Nightcats, was off the road and had some time available in his Greaseland Studios.  CB had several songs, but the studio availability caught him off guard.  Some songs had yet to be arranged and rehearsed; he wrote one on the way to the studio, and rewrote another (Man Down) toward the end of his last studio session. So yeah- this record was meant to be.

The Big Beat combines greasy, authentic blues with country influences, at times a sort of Steve Earl thing. As Michael Kinsman of 411 Blues  sees it, “Chickenbone’s song writing is varied and unique, but at its core adheres to classic blues traditions.” Produced by Larry Teves (Chickenbone’s real name) this disc has a real organic ‘guys just jammin’ in the studio’ vibe to it that is just really enjoyable to be around.  Don’t let the colourful, goofy “Happy Days dad” cover art fool you, these 9 tracks are the real deal.

The Big Beat just came out Sept.15th but feels like it could’ve just as easily come out in ’65.  Chickenbone Slim is definitely has it going on. 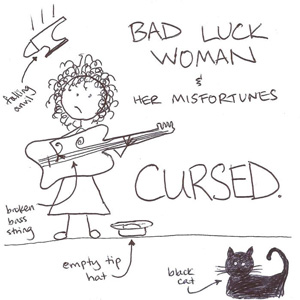 A captivating release here from this Toronto based blues/ R&B band, reviving obscure and forgotten tunes by sassy ladies of the 50’s and 60’s.  Though Cursed was released in 2016, it just made it to my desk recently- and I’m glad it did.

Cursed has a brash, energetic, infectious spirit.  They cover stuff by Big Maybelle, Little Sylvia, Dolly Cooper, Carmen Taylor and Ella Johnson, while keeping alive classics by Ray Charles, Etta, James, Muddy Waters and Jimmy Rogers.  The sound seems a little overdriven but that gives the disc a kind of lo-fi 60’s appeal that suits the songs extremely well.  It’s like dropping in on a horn-driven, New Orleans sock-hop.

Cursed reminds me somewhat of Maria Muldaur’s semi-recent excursions into jug band blues, and you get the feeling that the band wants you to have fun with this. The group formed in 2015 and has played at several high profile spots in Toronto (Grossman’s Tavern and Castro’s Lounge among them) as well as several festivals like the Cold Weather Blues Festival, Sessions Toronto/ Muskoka, and the Markham Jazz festival; hell, I’ve been in bands longer than these guys that never got out of the basement!

Bad Luck Woman is Rhaha Javanfar on bass and vocals, Fraser Melvin on guitar & vocals, Andrew Moljgun on sax and Jonathan Hyde on drums with, of course, a little help from their friends. As John Valentyn of John’s Picks wrote, “…it isn’t just the excellent vocals here, the whole band knows how this music should be played”, and he’s right on the beam.  It’s a thrill when that happens, and that’s certainly the case with Cursed. 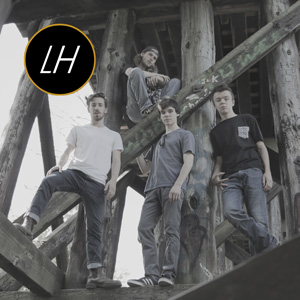 This is the debut e.p. for this rock band out of the University of Guelph in Ontario. 6 songs in all, a modern rock sound loaded with ambition- but will they be heard?

The London Hammer e.p., produced by Tim Bastmeyer, is a promising start to what will hopefully be a career in music for these 4 lads; Gaelen Strathdee on vocals and rhythm guitar, Jack Farrell on lead guitar, Mitchell Staffen on drums and Sean Morely on bass.  They remind me of a couple of groups you’ve probably never heard of before- The Corn Dogs and Rheostatics– but their sound is more accessible, combining rock and acoustic folk elements for an organic aural experience.

Overall London Hammer is pleasing to the ears, but I do have a couple of quibbles; Gaelen’s voice tends to be almost shy, a bit weaker than the material demands of it at times- he needs to shout!  And the playing can get a little sloppy, especially the drummer (Mitchell) on the last track of this 6 song disc, What I’m Feeling.

A young band, first time in the studio, things are bound to be a little uneven… but the lyrics have real emotional depth, and this is a promising start.  If I didn’t like London Hammer you wouldn’t be reading about it here, but they have some work to do before they can take it to the next level.  I, for one, like being on the ground floor. 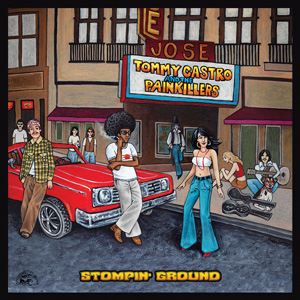 Tommy Castro hits the ground running with his new release.  Full of energetic songs, great playing and a real Friday night spirit, Stompin’ Ground boogies its ass off like nothing else I’ve heard this year.

On Stompin’ Ground, Castro opens the window to his past and his future with a set of 12 tracks featuring 6 originals and new versions of songs he learned and played as a young up and comer.  Tommy came up in the late 60’s/ early 70’s on the rough and tumble side of San Jose, a place where street-tough Mexican Americans and counter culture hippies came together to drink, smoke, laugh, party, and listen to tunes.  Castro mixed the blues rock he loved with soul music and socially conscious message songs of the day that surrounded him, and so his own sound was born.

Produced by Tommy Castro and Kid Andersen (Rick Estrin & The Night Cats), Stompin’ Ground is a meaty record, one of the best examples of spirited live energy captured in the studio that you’ll ever hear.  Aside from Tommy & the band guests include Kid Andersen (of course), David Hidalgo, Charlie Musselwhite and Mike Zito, to name a few.  All involved are having such a good time that it can’t help but spill onto your shirt too.  “As soon as we started cutting we knew we were onto something” Tommy says.

Often, when reviewing an album, it can take a few spins to figure out how I feel about it- that wasn’t the case here.  From the opening chords of Nonchalant to the outro of Live Every Day, I was smitten.  Stompin’ Ground is, as Allmusic.com states, “Swaggering, razor-wire gospel-tinged soul, simmering deep blues and hard-grooving house rockers”, and I whole heartedly agree.  It’s the best record of an already impressive career, and easily one of the best records you’ll hear this year.  Glorious!

KEY CUTS:  My Old Neighborhood (reminds me of John Hiatt’s “Feels Like Rain”), Nonchalant, Further On Down The Road 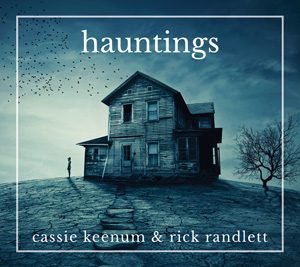 Talk about your perfect album title.  Hauntings is the collaboration of 2 talented musicians, a blues exploration that plums the depths of acoustic blues. This disc is sparse, elegant and, yes, haunting.

Cassie Keenum was raised the daughter of a Baptist preacher, with a rebellious spirit that led her to fall in love with the blues she heard in shady bars.  Rick Randlett fell into the blues’ embrace in the 70’s, influenced by rock artists like Eric Clapton.  Put Cassie and Rick together, and you have a natural chemistry that results in soulful, original blues.

Hauntings features Cassie and Rick on vocals and guitar, Nicole Wagner on bass, Rusty Valentine on drums, Little Mike on harmonica and Mitch Rogers on keys. Produced by Randlett, Hauntings is a fairly relaxed set- even an up-tempo number like Minute Man has a laid back swing to it that’s just kind of… cool, man. I suppose another word to describe this disc is ‘uncluttered’; there isn’t a lot of multi-tracking and Cassie’s brassy vocal doesn’t get double tracked for extra ‘oomph’.  Rick’s guitar playing is perfect on these songs too, providing exactly the right spices as needed, never trying to bury a tune in a flurry of notes, even during a solo.  As a player, he obviously understands that it’s not how many notes you play, but what you do with the ones you DO choose that counts.

Hauntings, while not strictly acoustic, still makes use of that form most effectively and  Keenum’s voice plus Randlett’s guitar are perfect companions.  With the exception of a decent cover of Leonard Cohen’s Hallelujah all of these songs are originals.  There’s a spirit and a feeling to this set of songs that I can’t shake- and I don’t want to either.

KEY CUTS:  Seventh Day, All Along, Get Lit