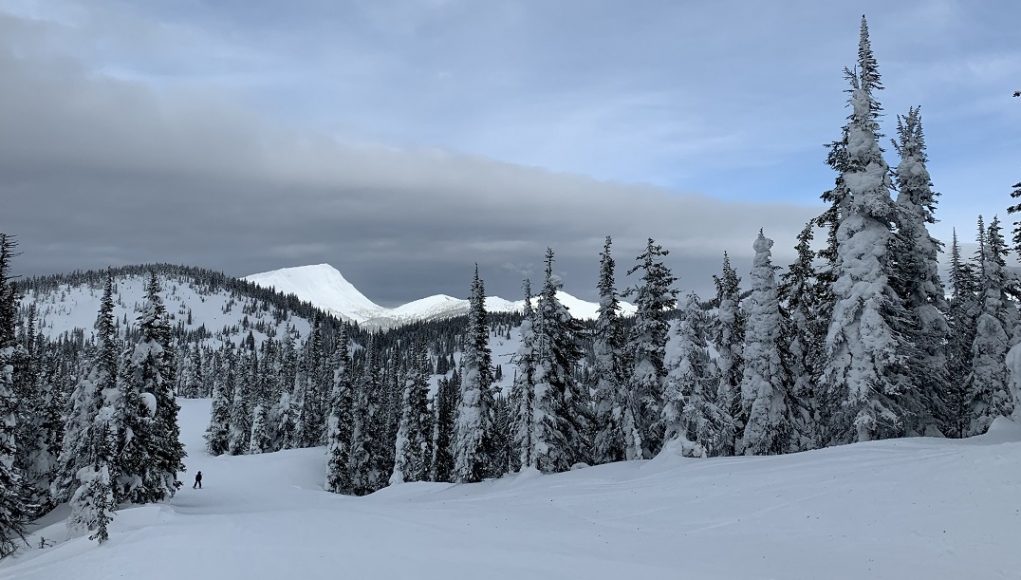 Blame it on Scandinavian and other fortune seekers lured to the glittering ore of Red Mountain who had the presence of mind mingled with foresight to look beyond the gold. On those slopes, they discovered the more sustainable white ‘gold’ that softens that rough terrain annually to create a wintry ‘El Dorado’.

On redresort.com, the history unfolds, “The Scandinavians brought with them their knowledge and love of skiing and soon organized the Rossland Ski Club, which held the first recorded ski competitions in Canada . The first downhill race was held on Feb. 15, 1897, from the top of Red Mountain down the south side to the present location of the Rossland Museum and Discovery Centre.

The race was organized and won by Olaus Jeldness, a Norwegian mining engineer and the leading early advocate for snowsports in Rossland at the first Winter Carnival in 1898.” Known for jumping particularly and ski running (precursor to downhill), he created the elaborate Jeldness trophy – now displayed at the Rossland Museum and Discovery Centre Ski Wing. Skol to him and all those pioneers!

Through scenic byways and mountain passes, the drive is under four hours to Rossland, BC, from Kelowna or Penticton and well worth it to experience a quintessential ski town. RED Mountain Resort is just minutes from town centre and unlike the Okanagan, high season is predominantly winter when skiing is in full glide.

Heralded as “the last great, unspoiled resort”, RED is the first stop on Canada’s Powder Highway. Here, you’ll find the largest area per skier in North America – some 3,850 acres with fabulous views, terrific tree runs and ‘steep and deep’ conditions. There’s even in-bound cat skiing for $10 per run.

With bragging rights as the first Canadian ski resort to host World Cup competitions, it rivals the greatest ski destinations using parameters such as snowfall, terrain, friendliness, town ambiance and manageable crowds. Yet it maintains charm as a community ski hill.

Skiing and snowboarding made best lists in Skiing and Powder magazines and The New York Times. Rafters lounge was named “North America’s Best Ski Area Bar” by Powder. We loved our après ski lunch in Rafters, where we rubbed elbows with locals and learned history from its wood grained walls.

We took one of the Noble House’s newest properties, The Josie Hotel, up on its offer to “experience the true soul exhilaration of living for today”. Slope side at RED, The Josie adds a modern Euro-vibe, a true ski-in/ski-out destination.

“Boutique, Bespoke, and Never Boring” self-described, The Josie is a luxurious base from which to explore. Although you may not want to stray from its well-appointed rooms, comfortable beds, spa, fitness centre or fine cuisine and beverages at The Velvet Restaurant and Lounge. Our skiing goal was kept on mission thanks to the convenience of The Ski Concierge. There, our gear was stored, making it a cinch to put on warm boots and step outside to hop on our gear and ski to the nearby chair. Oh, and the end of the day transition to the bar was equally slick. Skol, too, to that!

Speaking of things worthy of toasting is Rossland’s historic and quirky town with ski and bike shops, great bakeries, coffee shops, restaurants, pubs like The Flying Steam Shovel and the Rossland Beer Company. If you like craft beer like we do, you’ll love this cozy pit stop that’s clearly a local hangout after a day on the slopes, other outdoor activity or work.

Rossland Beer Company is the oldest in this area, established by Owners/Operators Petri Raito and Ryan Arnaud (brewmaster) in 2012. “Small in size but big in flavour” is its mantra and there’s a whole lot of community love breathing life into its pintsize space. Here, you might find a local bakery offering sandwiches, a food truck outside or locals free to tote in their own food to enjoy with the beer. Still, the focus is firmly on beer and Rossland Beer Company offers light snacks only.

Down the road in the home of the Trail Smoke Eaters hockey club, Trail Beer Refinery, opened in March 2017 by 13 local business partners, quickly became a hub. Its motto, ‘Work hard. Play harder.’ reflects its community spirit. It is packed to the rafters on game nights and in addition to the tasty brews, folks chow down on handcrafted pizzas, shares and small plates, soup, salad, sandwiches, burgers, desserts and daily specials such as fish-and-chips.

Newest in this array of craft breweries is Tailout Brewing of Castlegar, just opened three months ago in 2019. It doesn’t have its own restaurant rather partners with The Grand Buddha Bistro located above it to present four Tailout specials. If you want to access more from the Thai restaurant’s menu, order takeout. Tailout customers are welcome to bring in those orders and other food to pair with their beer.

Between the skiing and the ‘skol-ing’ we had such a great getaway in Rossland, we might have to circle back March 27 and 28, 2020, for the 7th Annual Beer Goggles Craft Beer Festival at RED. Says RED GM Don Thompson, “Beer Goggles is not simply a beer festival, but a celebration of the craft beer industry. And RED is kind of the ‘craft beer’ of ski resorts: better taste, less filler! We really feel a common bond with many of these breweries and respect their daring independence and devotion to making people happy.”

No doubt we’d catch up with those friendly local breweries and a select visiting ones at Beer Goggles.

Barring that, we’ll return for the golfing, biking, hiking, fishing and other seasonal fun. Folks may have pigeon-holed Rossland and RED as a winter destination in the past. Word is spreading about the fabulous trails for biking, hiking and golfing –all skol-worthy, too!