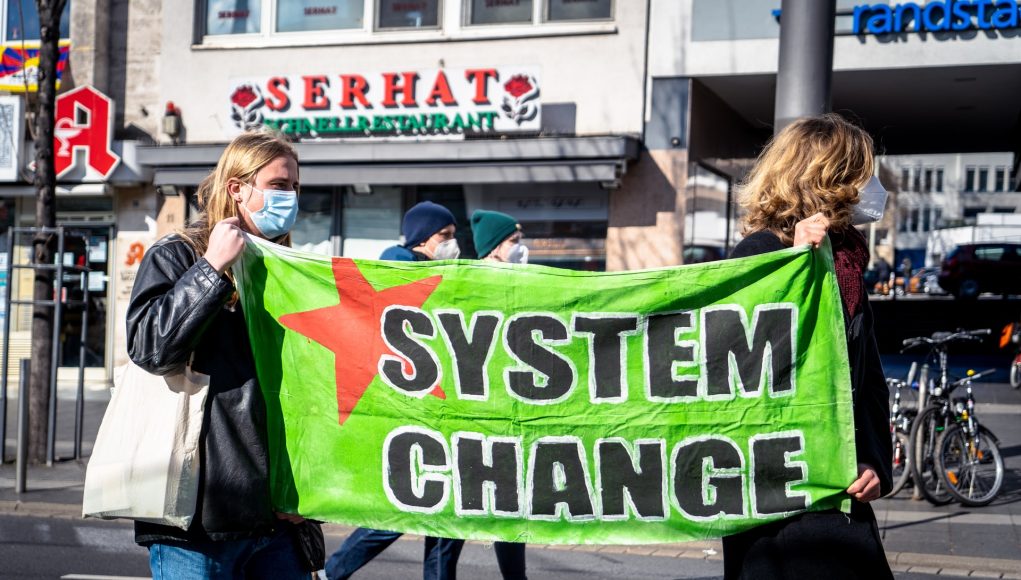 When people do things they shouldn’t, they often try to distract attention from their actions. Guardian writer George Monbiot notes that many corporations fuelling the planet’s destruction spend significant resources to shift attention away from themselves and onto us.

“The deliberate effort to stop us seeing the bigger picture began in 1953 with a campaign called Keep America Beautiful. It was founded by packaging manufacturers, motivated by the profits they could make by replacing reusable containers with disposable plastic,” he writes. “In 2004, the advertising company Ogilvy & Mather, working for the oil giant BP, took this blame-shifting a step further by inventing the personal carbon footprint. It was a useful innovation, but it also had the effect of diverting political pressure from the producers of fossil fuels to consumers.”

“Greenwashing” is another way corporations divert attention from their true ecological impacts. As British psychology professor Steven Reicher points out, “One recent McDonald’s spot boasts of the way the company is recycling cooking oil into truck fuel, coffee cups into greetings cards, and plastic toys into children’s playgrounds. The problem is that it makes no mention of the fact that McDonald’s beef footprint alone constitutes 22m metric tons of greenhouse gas emissions a year.”

Personal actions can create consumer demand for sustainably made products, model greener behaviours and foster empowerment. But focusing on the personal runs the risk of eclipsing our responsibility to also marshal systemic change.

Facing the real issues often leaves us feeling anger, anxiety and despair. While these are reasonable responses to the environmental crises engulfing us, the multi-billion-dollar self-help industry has profited enormously by convincing us that fixing ourselves is the priority.

How do we balance the need for personal change with systemic change, when both are necessary?

Personal actions can create consumer demand for sustainably made products, model greener behaviours and foster empowerment. But focusing on the personal runs the risk of eclipsing our responsibility to also marshal systemic change.

It’s hard to take on systems, but until we do, they’ll continue to grind up nature and spit out profit where rivers, forests and meadows once stood.

As Reichler notes, “McDonald’s advertising approach is emblematic of the way in which companies seek to continue with business as usual, by distracting us from where the real problems lie. Its adverts represent just one of many strategies by which this is accomplished. One of the most common methods is to turn the climate crisis from a systemic into an individual issue.”

It’s hard to take on systems, but until we do, they’ll continue to grind up nature and spit out profit where rivers, forests and meadows once stood.

As a result of environmental racism, Indigenous and racialized communities have been placed at greater risk of living adjacent to land degradation and pollution from industrial activities and waste disposal.

Change won’t happen until we demand it, and unless we face the flames (metaphorically and, increasingly, literally), there is little chance we’ll be sufficiently motivated to put them out.

Our economic system has strong hands upon the bellows. It promotes growth with no limits, which leads to such degradation of nature that around a million species are at risk of extinction — more than ever in human history.

This economic system also results in gross inequities. It’s possible for one person to make $36 billion in a day — more than the yearly gross domestic product of some countries. As Monbiot writes, “The richest 1% of the world’s people (those earning more than $172,000 a year) produce 15% of the world’s carbon emissions: twice the combined impact of the poorest 50%.” He proposes “a new system, in which there is ‘private sufficiency and public luxury.’”

In his words, “While there is not enough ecological or even physical space on Earth for everyone to enjoy private luxury, there is enough to provide everyone with public luxury: magnificent parks, hospitals, swimming pools, art galleries, tennis courts and transport systems, playgrounds and community centres.”

It’s a lot to take on, and it’s good to check out at times — to find respite in binge-watching, books, self-care routines or nature — as long as we check back in. Change won’t happen until we demand it, and unless we face the flames (metaphorically and, increasingly, literally), there is little chance we’ll be sufficiently motivated to put them out.

It’s not all work. Joy can be found in dreaming up creative responses (think of the many clever protest signs!) and joining in community. To paraphrase Joan Baez, activism is the best antidote to despair.

Everything under the sun