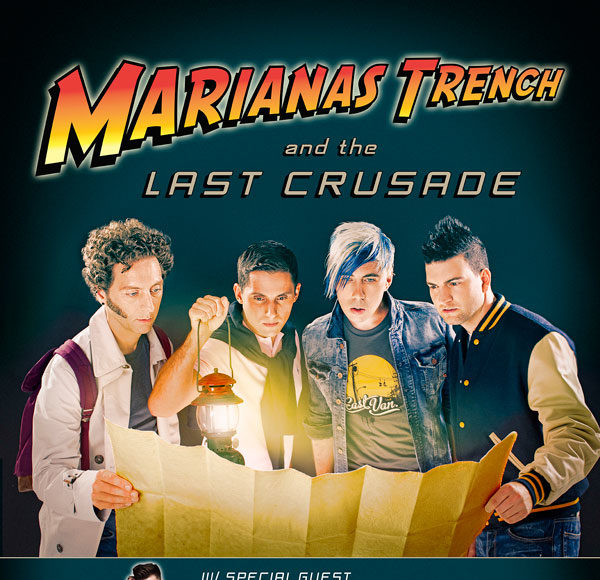 ON THE ROAD WITHMARIANA’S TRENCH AND SHAWN HOOK

Toronto, ON – October 5, 2016 –  St. John’s, Newfoundland-bred indie pop band, Repartee, has been climbing the charts and rocking stages Canada-wide since the release of their debut album, All Lit Up (Sleepless Records). Now, they’re about to check more cities and venues off their list, as they embark on an extensive 15-date tour across Canada with Mariana’s Trench and Shawn Hook. A West to East Coast jaunt, they start in Prince George, BC, on November 1st, and conclude in their hometown of St. John’s on the 24th. During this time, they’ll play a special sold-out show with USS in Toronto at the Danforth Music Hall on November 19th. See complete list of dates below.The band recently played the Toronto International Film Festival in September, and will rock Halifax Pop Explosion on October 21st (with Hey Rosetta, Barr Brothers and Royal Canoe). Recently nominated for six MusicNL Awards, which celebrate musicians and industry professionals of Newfoundland and Labrador, Repartee has been quickly rising to the top, as a fresh band on the scene.  They were recognized in the following categories: FACTOR Album of the Year, Group of The Year, Entertainer of the Year, Songwriter of the Year, Pop/Rock Record of the Year, and Music Video of the Year.Their debut, All Lit Up, was released on April 29th via Sleepless Records. Fueled by catchy melodies, fantastic production and sharp songwriting, All Lit Up is a blend of personal tracks about life experiences, resonating with the band’s live energy and visual presentation. The album is a true depiction of Repartee’s visual aesthetic and artistry that exudes positive vibes and fun times. Their standout single, Dukes, was produced by Young Wolf Hatchlings, and is filled with raw power. As lead vocalist, Meg Warren, sings, “Come on over, let’s settle it right. Put your Dukes up, cause I’m ready to fight, for you,” she paints a relevant picture of passionately fighting for someone, or something.After enlisting the talents of some of Newfoundland’s greatest rock and pop musicians (guitarist Robbie Brett, drummer Nick Coultas-Clarke and keyboardist Josh Banfield), Repartee quickly went from the grimy bars of their home-province, to sharing the stage with the likes of LIGHTS, Tegan and Sara, Dragonette, Arkells, and more.In the last few years, the band has toured nationally, and spent time writing new material, which received placements in MTV’s Awkward, Finding Carter and Becoming Us. They were signed to Sleepless Records (July Talk, Allie X) last year and their new album, All Lit Up, is the latest progression in their sound – a tight fusion of top 40 pop and modern indie-rock that “can make you dance ‘without giving a f*ck about how foolish you look” (The Muse).Catch Repartee as they light up Canadian stages this fall.TOUR DATES:10-21-16 – Halifax, NS – Halifax Pop Explosion (HPX Mainstage, The Forum MPC)11-01-16 – Prince George, BC – CN Centre11-03-16 – Victoria, BC – Save On Foods Memorial Centre11-04-16 – Abbotsford, BC – Abbotsford Centre11-07-16 – Grande Praire, AB – Revolution Place11-09-16 – Medicine Hat, AB – Canalta Centre11-10-16 – Saskatoon, SK – SaskTel Centre11-12-16 – Brandon, MB – Westman Place at The Keystone Centre11-13-16 – Thunder Bay, ON – Community Auditorium11-14-16 – Sault Ste. Marie – Essar Centre11-16-16 – St. Catharine’s, ON – Meridian Centre11-17-16 – Windsor, ON – Caesars Windsor11-18-16 – Ottawa, ON – TD Place11-19-16 – Toronto, ON – Danforth Music Hall* – SOLD OUT11-20-16 – Moncton, NB – Casino New Brunswick11-21-16 – Halifax, NS – Scotiabank Centre11-24-16 – St. John’s, NL – Mile One Centre* – with USSwww.reparteemusic.cawww.sleepless-records.com