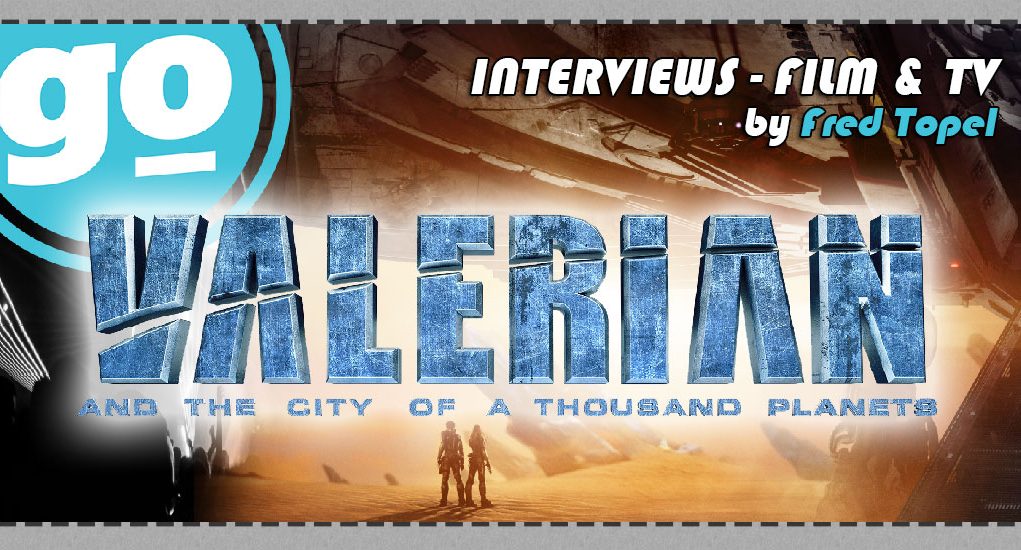 Ever since The Fifth Element 20 years ago, fans have been waiting for director Luc Besson to go back into space. Well, he returned with an even bigger universe than his original space epic, based on the French Valerian comic books.Dane DeHaan plays Valerian, a space Major on a mission with Sgt. Laureline (Cara Delevingne). Their mission leads them to various planets and dimensions, including one in which Rihanna plays a shape shifting alien dancer. Gonzo attended a press conference Besson, Delevingne and De Haan. Valerian opens July 21.Q: How did you cast Rihanna and what was the complexity of creating her morphing sequence?

Luc Besson: The first thing is, in my head I said, “Okay, who will be the best person for the part?” My first idea was Rihanna. I don’t even know if it was realistic or not but it was just my idea and my dream. You never know until you ask and I was lucky, because at this period, she really wants to play. She wants to try to be an actress and be in movies. So I was lucky. I just arrived at the perfect timing and she was exceptional. It’s very difficult to get here there on the set because she’s going three times around the world per day, kind of. But when she’s there, the entire entourage is out of the set. She’s by herself. She’s very focused and asking you to direct her, which for a director is just a dream. This little one minute scene is six days of work and a month of studying all the costume. It was a tough scene to prep since the beginning.Cara Delevingne: She had more outfit changes than all of us in the movie together, basically.LB: She had more outfits than me for the last 10 years.Q: What was it about Dane and Cara that made you cast them?LB: The thing is, I know the comics since I was 10 years old and there’s 29 albums. So I really know Valerian and Laureline very well. It was more for me, I have the picture of who I want and to check who can fit. So it was pretty easy, but I must say that both of them when I’ve seen them the first time, the first hour of conversation I knew it was them. One thing that was very important is the timber of the voice. He has the voice of Valerian for sure and she was Laureline, except she had to work for a couple of months on her accent because she sounds so British indeed.CD: You’ve clearly been working on your British accent as well.LB: It’s amazing. On the phone ,you can’t tell. It’s a hard thing to lose a British accent anyway and she did it very well. So I knew that it was them. My only fear was to see them together because sometimes one is perfect, the other one is perfect but you put them together and they don’t match. Honestly, it takes 10 seconds. After 10 seconds you can tell. You can tell if it matches or not. I was so happy, I tried not to show it too much at the time, but I was so thrilled because I was sure about the couple.Q: Cara, do you pick roles to be a role model and see yourself as a role model? CD: I’ve been given a tremendous opportunity. I’m very blessed to have a strong influence, as they say, with young girls and teenagers. That’s been my goal from when I was younger, to be a role model and for young girls to be able to look up to me because I’m following every single one of my dreams that I’ve ever had in my life, through hard work and determination. My message is that you can do anything that you put your mind to as long as you work hard and never give up.Q: Where does acting fit in with your career now?CD: Acting is basically what I spend most of my time doing. The occasional time that I do get off, I do like to do other work in terms of either modeling or charity, also a break occasionally which is also important. Yeah, acting has always been a dream and my passion, so I’m going to carry on following it.Q: Luc, have strong female characters always been important to you?LB: I think it’s normal. The way I see it is I think in the ‘70s and ‘80s, the movies were totally on the men’s side and it’s not fair. I pay the exact same attention, believe me, to the female part and the male part, exactly the same. So I don’t see any difference. You make the difference because most of the other films are really “Hasta la vista, baby” and then that’s it. The girl is in the back crying, “When are you coming back?” That’s not my vision of the relationship between men and women. Maybe I was raised a certain way that I was lucky enough to see that they’re both very strong. So the same attention for me.Q: Dane, how do the creatures of Valerian compare to the creatures in your last film, A Cure for Wellness Dane DeHaan: I don’t see many parallels between this movie and Cure for Wellness, to be honest. That’s why I like to do in my career is all different kinds of things. In my mind you couldn’t find two more different movies. I’ve never played an uncomplicated hero. That was extremely fun for me. It kind of brought the joy of the work back. It made me remember why I do this, to have a good time and to have fun. I don’t always have to be torturing myself, although there’s a time and place for that. It’s nice to take a break and it’s nice to be a part of something that is artistic but is also fun and entertaining and for everybody. You can bring your kids or you can have a couple beers and go and see it. It’s just kind of there to sit back and enjoy. That’s what’s exciting about this movie for me because it is a departure from things that I’ve done in the past.Q: What did you learn behind the scenes?CD: I can’t even begin to start actually from what I learned. Me and Dane working together, I thought it was always very interesting why Luc picked us both. It’s funny because over the six months, we definitely have a very different approach. Dane is an incredible actor, went to drama school. I’ve never learned more from watching him work. His dedication and his work ethic, it really inspired me so much. Obviously sitting on set, we got to talk so much about how we do things. I think for me, I kind of reminded Dane how to laugh and to keep it fun and light. Also because we were so lucky on set, we got to have five day weeks. We didn’t have to do night shoots so we got to have a lot of spare time where we got to explore, the movie, the characters but also Paris as well which was so nice.DD: Look, I feel like I learned a lot from Luc and from Cara making this movie. I watched Luc every day on set having the time of his life making the film he’s wanted to make his entire life. He would give me the biggest hug every day I stepped on the set. I have this tendency to take myself too seriously all the time. Cara doesn’t have that problem, in the most beautiful way where she loves life. She knows how to live it and she is living her dream. She’s doing all these things that she wants to do and she’s always running on high octane in this incredible way. I remember Luc pointing out to me about halfway through, every day when Cara shows up on set, I can tell she walks in the door before I even see her because she puts this huge smile on your face. I was just so happy to see her every day and be around her every day and feed off of that energy of Luc and Cara having the time of their life. I think that’s why I was also able to have the time of their life because I got to work with both of them.CD: It makes me want to cry. Can we hug?