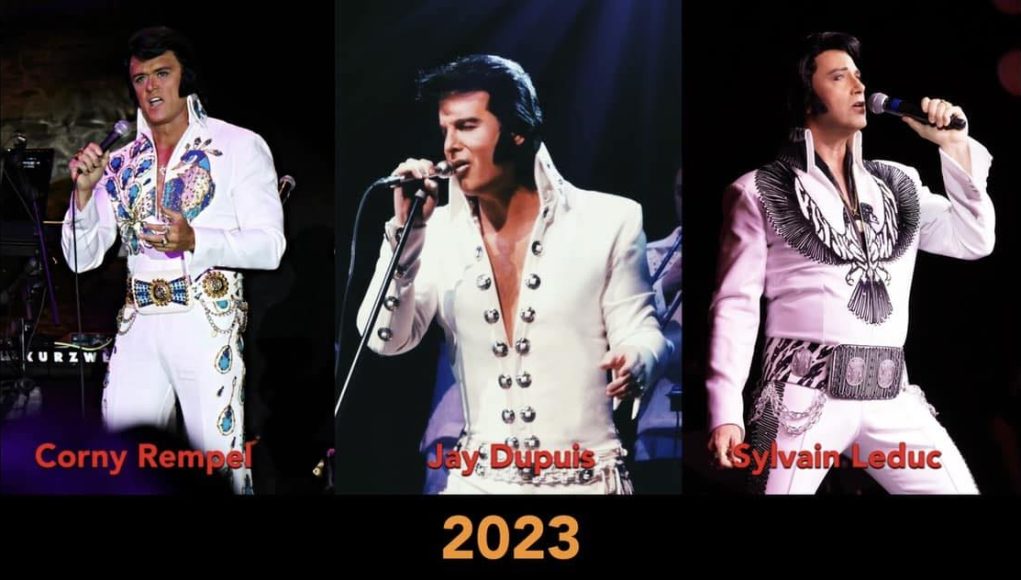 Penticton’s Elvis Festival, in recognition of the King of Rock N Roll, will be singing on the
shores of Okanagan Lake June 22-25, 2023 in the beautiful City of Penticton, BC.

Dust off your Blue Suede Shoes because in less than eight months we will be dancing to an icon singing “Suspicious Minds, “In the Ghetto” and more hit songs from the 50’s, 60’s and 70’s.

Come see all the Elvis Tribute Artists compete at Okanagan Lake Park for a chance to be named the Penticton Elvis Festival Grand Champion. Don’t miss our headliners show at the Penticton Trade and Convention Centre featuring:

Jay Dupuis, was born in Baton Rouge, Louisiana where he lived most of his childhood life. Growing up in a house where his father was a professional musician made it very easy for Jay to follow in his father’s footsteps. Dupuis soon became a huge fan of the King of Rock n Roll. Shortly after, Jay got his first taste of live performing impersonating Elvis for his family and friends at social gatherings. In 2014, Jay entered the Ultimate Elvis Tribute Artist World Championship. After two days of competition, Jay Dupuis won the world title and is now recognized by Elvis Presley Enterprises as their Ultimate World Champion and the best Elvis tribute artist in the entire world.

Sylvain Leduc, a Native of Valleyfield, Quebec, he and his family relocated to Massachusetts, USA where, at the tender age of 3 years old, the adventure began. Competing since 2015, he has received several awards and accolades for his authentic renditions, including Top-1- Finalist in 2018 Ultimate Elvis Tribute Artist Contest and 1st Runner-Up in the renowned Images of the King Contest in Memphis, Tennessee.
The success of his 40 Years Unforgotten CD and the sequel, 40 Years Unforgotten – Gospel, inspired the recent release of his newest album- A Country Tribute to Elvis, a compilation of some The King’s greatest Country hits.

Corny Rempel, for over 20 years, Rempel has played to packed audiences across Canada, the United States, and Mexico. You’ll also hear his lively, distinctive voice on many cartoons, websites, movies, and video games. Corny was crowned the Elvis Gospel Champion at the 2015 Collingwood Elvis Festival in Ontario. He also came 1st place as Grand Champion of the 2017 Penticton Elvis Festival in Penticton, BC. Rempel is being featured in a documentary called “That Mennonite Joke”, which has been picked up by Bravo. Corny plays Elvis like no one else. His facial expressions and gestures are uncanny and his voice is a dead ringer. The thing that makes the show unique is Corny’s humorous twist.