Ahead of his concert at the South Okanagan Events Centre, Gonzo Okanagan magazine got an exclusive interview with Canada’s favourite country crooner.

But first here’s a little about Paul Brandt that should give you the warm and fuzzies and like him that much more.

Growing up in Calgary, Paul was a pediatric registered nurse at the time of his big break into the music scene in 1996 with his single My Heart Has History. The song topped the country music charts, propelling him to international stardom.

Since that break out song, he’s put out hit after hit, won numerous album, song and male artist awards and continues to wow his more than one million fans.

Fans can’t get enough of hits like Alberta Bound, I Do, Highway Patrol and so much more.

In 2017, he was inducted into the Canadian Country Hall of Fame. The Canadian music icon is also big on giving back and making a difference.

He is busy with his charity called Buckspring Foundation and has a project called Not In My City, to raise awareness and help stop sexual exploitation and human trafficking of children and youth both here in Canada and around the world. 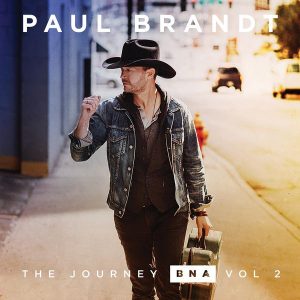 His latest album The Journey BNA Vol. 2 is a celebration of all the music, his family and his fans who have come along for the ride.

Now Paul Brandt is on his Journey Tour 2019. Fans are counting down the days to when the country superstar plays the South Okanagan Events Centre Jan. 26. Joining Brandt will be the band High Valley, singer Jess Moskaluke and The Hunter Brothers.

In this Q & A, Paul talks about where he gets inspiration from, how his kids ended up wrestling in the Prime Minister’s office and what he did on vacations in the Okanagan as a kid. He also begins the interview with some amazing words about his wife. So read on!

GONZO OKANAGAN (GO): All About Her is a love song to your wife. The video is a really touching tribute to wives everywhere. Has your wife been a big part of your journey?

Paul Brandt: I couldn’t do what I do without Liz. Right from the beginning, she’s been an integral part of my career, as well as my best friend and life partner. After our honeymoon, we moved into our apartment, got settled for a couple weeks, then got in a bus with 11 musicians, and did 180 shows. She has sung every album and been an executive producer on all my projects as well. If you ask me she’s the talented one, I just get to be the guy on stage!

GO: Do you like making music videos? Do you have a favourite?

Paul: I love making music videos. While I tell stories with my songs, I’m not a visual storyteller, so working with directors who are talented in that way is always amazing to me. I would say Alberta Bound was my favorite video to make. It was filmed in some of my favorite parts of my home province. I’m not gonna lie though, it was filmed in prime fishing territory on the eastern slopes of the Rocky Mountains… it was tough to stay focused!

GO: You have two kids. Does your family go on the road with you?

Paul: Before the kids were in school, Liz and I would take them on the road with us. We had some amazing adventures. The kids even experienced a visit to Parliament Hill, and even met the prime minister when they were five years old and three years old. They started a wrestling match on the couch in the prime minister‘s office… They love it when I tell them that story. Now they’re so busy with hockey, piano, and school with their friends, it makes more sense for them to stay home while I go on the road. I miss them dearly, but it’s always a great reunion when I get home!

GO: What’s one thing you always take on the road with you?
My favorite heavy sleeping bag.

Paul: Anytown where people come to party, I’m in!

GO: Favourite song to play in front of audience?

Paul: We’ve been fortunate to have a lot of hits over the years. I’m excited to try out some of the new songs off of The Journey Vol. 1 & 2, but there’s nothing like playing the classics. One of my favorite moments is when “Convoy” kicks in. It’s a blast to play live!

Paul: There’s a song off of the “Small Towns & Big Dreams” project called “Virgil and the Holy Ghost”. It’s one of my favorites to play acoustic.

Go: Have you ever vacationed in the Okanagan? If so, any favourite spots or memories?

Paul: The Okanagan was our prime vacation spot when I was a kid. We would camp in Okanagan Campground, do all the usual tourist things, enjoy the fresh fruit and beautiful surroundings and spend most of our time in Penticton at Skaha Beach.

GO: You’ve been in the music scene for two decades, putting out hit after hit. What gets you inspired to make new music?

Paul: It’s always been about two things; connecting with the fans through music and using the platform to help people. Most of the time I’m not on stage or creating, I’m working on projects like “Not In My City” (www.notinmycity.ca) and other projects taken on by my foundation called The Buckspring Foundation.

Go: What’s your advice for singers just starting out?

Paul: Never quit and do it because you love it.

GO: What do you love about this new album?

Paul: Every album is special to me in its own way. They are really milestones for me reflecting on different eras of my life and the things I was learning during their creation. The Journey project all started while I was reflecting on the song Alberta Bound. That song was inspired by my many trips driving home from Nashville to Calgary. The fact is, I’ve taken the trip from Calgary to Nashville many times too. That’s where the concept for “YYC BNA” came from (the airport codes of Calgary and Nashville). This past 20 plus years have been a physical journey, but it’s also been a spiritual and emotional one. This project covers ideas of faith, overcoming adversity, perseverance, truth and love. It also combines many “movements” in country music, from Outlaw to Singer-Songwriter, to Pop and contemporary sounds, it is a musical journey as well.

GO: What kind of show are you going to bring to Penticton?

Paul: This is the biggest production we’ve ever toured. Aside from the collaborations with the other incredible acts on this tour, our goal is to always raise the bar from the last time we saw the audience, and make sure everyone is having a great time, and experiencing something they haven’t before. We often have people comment that it looks like me and the band are having a great time on stage. It’s true. We are passionate about making music and entertaining, and I’m glad it shows!

GO: You have a lot of fans here who are really excited to see you. Any message you want to say to them?

Paul: Thank you. Thank you for all the years and all the memories and for continuing to allow me to do what I do. We’ll see you soon!