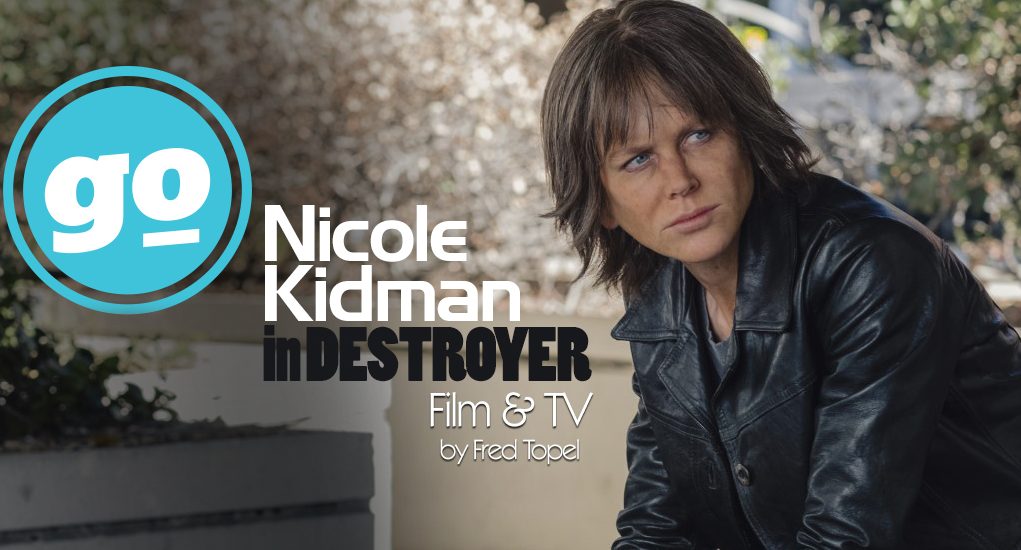 Nicole Kidman was a guest of honor at the AFI Fest film festival in Hollywood in November. Her new movie Destroyer had an early gala screening at the fest and AFI celebrated Kidman’s decades of legendary film roles. Gonzo was there to hear the Q&A with Kidman.

In Destroyer, Kidman plays Detective Erin Bell, a former undercover agent who takes to the streets when the criminal who got a way returns. It’s another intense Nicole Kidman performance and everyone can see Destroyer in theaters on Christmas Day.

Q: Do you look at things differently now than when you started out in movies?

NK: I started actually at 14 in a film called Bush Christmas. I got to get out of school for six weeks, but I think my whole journey has always been trying to find characters. As an actor, you’re very much not in the driver’s seat. You need a director to choose you. You audition a lot when you’re young. That’s what you do and sometimes you get roles and sometimes you don’t. I think you just have to have a passion and view it as a long journey because 30 years, always the journey. I wanted to go and explore the world and to explore the human psyche. By doing what I do and getting a chance to act, it’s taken me on this extraordinary road. And I’ve worked with the greatest directors in the world. I’ve been around the greatest minds. I’ve been the recipient of some of the greatest writers so it’s an amazing place to be, but I never thought it was going to be like this. I dreamed big but not like this.

Q: How do you sustain that passion, curiosity and energy to give 100% in every role?

NK: It ebbs and flows. That’s the truth of it. There’s times where you go, “I just don’t have any more to give.” There’s been times where I’ve gone, “Okay, I’m now drained. I don’t know where I am in my life. I’ve got to go and find it.” I always say you have to have the life to then be able to go and put it into your art. I’ve had a crazy life. I just have. I’m also a highly sensitive person and I attach very strongly to people. So with that comes all of the emotions that are attached to that. That then gives me the well to draw from. But I’m also still very curious. I still have this passion for the work and for being on the set. That time between action and cut is so extraordinary to me. Sometimes it falls and you just go I’m never ever going to be any good ever again. And then something happens and it ignites. I love it and I still love it to this day.

Q: How important was Moulin Rouge! and the role of Satine to you?

NK: I grew up in a family where musicals were considered the best. That was what you wanted to do. My family would stand around the piano, we would sing. I don’t have a great voice. I don’t have a voice that could sustain a Broadway show eight shows a week for years. But, suddenly Moulin Rouge! came along and it was like oh my gosh, I get to sing and dance and act which is what they used to do. The great actresses all could do all of those things. So it was kind of like being given this opportunity. Then of course I freaked out. I’m going, “I can’t do it.” Baz [Luhrmann] kind of had to push me into it. He’s such a showman, Baz. So he almost roped that performance out of me. I’ve always said I wanted to make a love story. As much as I make so many dark films and I explore all the territories, I like going to places that are considered uncomfortable and dangerous. I also love love. I just had never been in a great love story and I see Moulin Rouge! as a love story and I love being part of that world.

Q: Speaking of dark material, in Destroyer did you totally change from the inside out?

NK: I mean, that’s what you do as an actor. I don’t like doing the hair and makeup first because I still won’t believe in the mystery of the performance. There’s such a desire now for people to tell you everything and dissect everything. There’s magic involved and I love keeping in that magic so you can just watch the film. I have to say, this year I’ve been given roles last year that came out within a couple of months of each other, Boy Erased and Destroyer. Having both those characters in the same year is amazing. It was the time of my life. They’re both really extreme. By talking about the two there, they’re both mothers. They’re both on a path trying to heal what they’ve done to their children. I find that really powerful and emotional. I love that they’re so different but strangely enough they’re on the same path. That is really interesting to me. I actually did Boy Erased and I had four weeks off and then I went straight into Destroyer. And then I collapsed.

Q: And Destroyer is so physical and masculine.

NK: Well, I see it as deeply female. Which is a weird thing to say but I do see it as deeply female because her motivations are female. There’s a moment, and only a woman gets to experience this, when she finds out she’s pregnant and it’s a flash. She’s high. She’s doing cocaine. That is devastating for her. That’s the beginning of her relationship with her child. So that’s a female situation. And it’s so complicated and devastating. It leads her on this very destructive path. But, she’s maternal and she’s operating from a maternal force. It may have been a maternal force that has made massive mistakes, has not been there and has not been what we call a good mother, but she’s a mother. The basis for so much of her motivations and her drive is from that. And her shame and her pain.

Q: Do you run towards things that scare you?

Q: Did it feel different having a female director and crew?

NK: I don’t know about different because it is what it is. I just think that right now, I say this because I’m in a position to sometimes go, “am I going to be able to get this financed”. To put my weight behind women right now is an important thing for me to do. It’s unfortunate that it’s not just even, that you don’t just show up and sometimes an all female crew, sometimes an all male or sometimes it’s just mixed. It isn’t like that. It is still statistically very imbalanced. I feel the more you actually make a conscious effort to go, “No, we need to do this.” It will get changed, but only because you’re actually doing it. So having a female DP and a female editor, and they were really passionate because these were opportunities they haven’t gotten easily. That’s unfortunate to say that but that’s the truth. So hopefully that needle is swinging, that will change and we won’t be having this discussion in a decade.