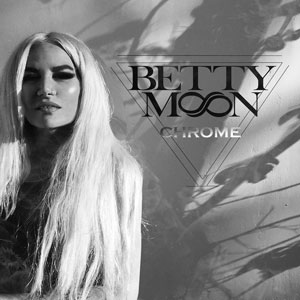 This is the 8th album for Betty Moon, an LA-based Canadian singer.  Out since last summer, Chrome is an intriguing mix of dance and rock rhythms that capture her new life in Hollywood after relocating from Toronto… better buckle up!

“The idea behind Chrome was to project a beautiful, destructive and sexy concept of what life can be like when there is nothing holding you back” Betty says. “Each song was pieced together to tell a story bigger than you could imagine.” Having listened to the album several times now instead my customary 1 or 2 spins, that certainly feels like the case.  Dance music may be a little outside my wheelhouse, but there’s a palpable feeling of decadent adventure here.

Chrome was produced by Moon along with her band with all the trappings of modern pop music like drum machines, keyboard textures and synth lines, combining for a slightly filthy vibe that adds up to some sort of low level spiritual orgasm.  This is the sort of music I imagine hearing at a club with flashing coloured lights and billowing clouds of dry ice fog.  Key in on the lyrics here if you like, they tell quite a story- but feel free to flow and move to the throb of the music too.

The best songs here for me are the rock-based tracks like Crazy I Am (which has genre-crossing hit potential) and Natural Disaster, which sounds a lot like Celleste’s Sink Or Swim, but overall Chrome is an interesting story well told.  Over the course of her career Moon has been nominated for 4 CASBY awards including Best Artist, Best Album, Best Single and Best Video of the year.  I’ll leave the final word to LA Weekly; “You can’t help but give Ms. Moon her due as a true child of the 60’s who embodies that era’s gung-ho spirit of sex and revolution and rock & roll… and who couldn’t use a healthy dose of that in these Skrillex times?”

KEY CUTS:  Natural Disaster, Crazy I Am, Life Is But A Dream 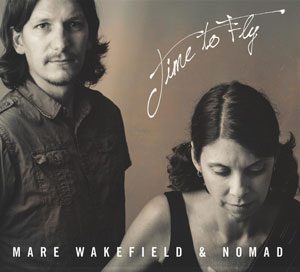 Spectacular.  I wouldn’t call this new album from Mare (pronounced ‘Mary’) Wakefield & Nomad country, not directly, but it is very much a Nashville folk/ Americana set.  Time To Fly, their 7th disc, is a musically sophisticated blend of jazz, bluegrass and yes, old fashioned country values too- and it’s irresistible.

Recorded at their own studio in Nashville, Time To Fly is deep, poignant and playful, often at the same time.  The duo (Nomad Ovunc also produced) is backed by a host of Nashville’s best; guitarist Will Kimbrough, drummer Wes Little, bassist Brian Allen and more.  Everybody sounds relaxed; one of the benefits of using your own studio is you don’t have to watch the clock.  Nomad notes that “They really understand Mare as a writer and they get what we’re trying to do with each song.  All the musicians bonded and played together like a real band.”

Like any great album each of the songs on Time To Fly is a great story, like a movie for your ears.  Of the song Breathe, a track that Mare says got them into the Kerrville Folk Festival and New York’s Falcon Ridge Folk Festival, she says it “has elements of grief and recovery, and lessons gleaned from failed relationships. It’s one of the more autobiographical songs on the record, and yet when we play it live, it’s also one of the songs that audiences respond to the most.”  The title track is, emotionally, the heaviest song here.  “To me, the story of the lyric is about letting go of someone who’s died” she says. “But I had an audience member tell me the song was perfect for her and her daughter who was about to go off to college- a different meaning of ‘time to fly’.”

Time To Fly is one of those records that will land close to your heart and stay there- it’s wonderful. 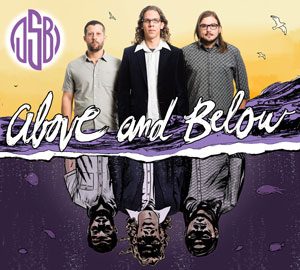 ABOVE and BELOW Jim Shaneburger Band (independent) *** ¾

This tough as nails blues/rock disc is JSB’s second release, and it’s one of those records that just BEGS to be turned up.  It rocks hard like The Jeff Healey Band’s early stuff- energetic, in your face and pulverizing.

Jim Shaneburger is a skilled guitarist, bassist, songwriter and vocalist, leading this band from West Michigan with a ‘take no prisoners’ attitude.  As a singer he reminds me a bit of Jonny Lang and with influences like Jimi Hendrix, Stevie Ray Vaughan, Led Zeppelin and Motown classics these 3 guys (including drummer Steve Harris and bassist Jeffrey Baldus) mix rock, funk, soul and blues into a sound all their own.  I love the way the album flows too, not afraid to come out of a balls-out rocker like the title track into an acoustic ballad like Bright Side.

Above and Below was produced by Shaneberger and Joe Hettinga and though it sounds decent as is, I think a more experienced (or different) set of ears and hands might have done them some good.  I’m not saying they did a terrible job, far from it, just that the results could have been even better.  I enjoy a nice bottom end and maybe it’s my stereo or the speakers, but the bass is a little thick- I might’ve mic’ed the drums differently too.

Jim Shaneberger has a wonderfully expressive voice for this kind of stuff, and his lead playing is pretty exciting too.  The band does tend to move together as one, especially when they drag the beat on Ain’t Your Daddy’s Blues.  If there are any blues deejays reading this, you’ll find some cool stuff for your show on Above and Below. 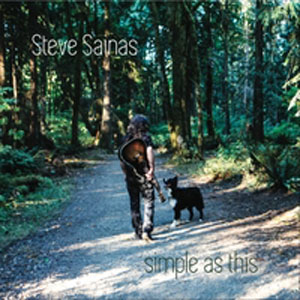 SIMPLE AS THIS Steve Sainas (independent) ****

A powerful record here, driving acoustic rock songs that address the human condition.  Simple As This is a thought provoking album with a positive vibe that seems to say “we’re in a bit of a mess, but there’s light at the end of the tunnel if you’re willing to look for it.”  Even before diving into the lyrics, it’s one of those records that just feels good.

Sainas has the perfect husky voice to sing these songs, and his dynamic acoustic guitar style is aided and abetted by the deep rhythmic groove of drummer Kelly Stodola and bassist Chad Matthews.  Together these three guys create a captivating sonic canvas that takes you on an introspective journey, posing more questions than they answer.

Before getting to this point Steve led his award winning blues band Mud Dog, now he’s going out under his own name to create a fresh type of contemporary acoustic roots music.  His live shows on the Lower Mainland, feature some funny stories and passionate, driving music that always seems to lift everyone’s spirits.  With Simple As This, it feels like we’re tapping into a little bit of that magic and it feels right that we can do that. Outside of his career as a writer/ performer, Sainas is a contemporary music teacher and education innovator, winning the 2015 Juno Award for Musicounts Teacher Of The Year for his groundbreaking program at Terry Fox Secondary School in Port Coquitlam; that’s the kind of guy we’re talking about here.

Simple As This is one of those records that just feels buoyant from the first notes.  The disc has an overall positive vibe (and couldn’t we use more of that these days?) and the songs are melodically simple, easy to absorb.  Then the story behind each song begins to pull you in and before you know it you’re thinking about life- how it is, and maybe how you could make it better.  This is definitely a case of love at first spin. 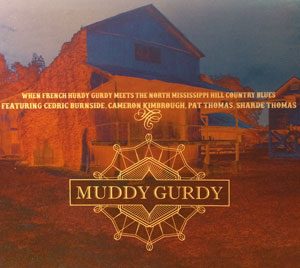 Well this is different.  A trio of French musicians have created a place where French hurdy gurdy meets the north Mississippi hill country blues, creating a delirious mixture of cultures that you won’t be able to forget.

Muddy Gurdy are Tia Gouttebel (guitar, vocals), Gilles Chabenat (hurdy gurdy- a traditional French instrument) and Marc Giomeau (percussion), bringing together 2 musical cultures that had never before been associated with one another.  They traveled across the States and immersed themselves in the country towns of north Mississippi, where they hoped to make “nomadic” style recordings with major local artists.  Descendants of musicians like RL Burnside and Cameron Kimbrough lent themselves to the project with obvious excitement.

Muddy Gurdy is about as organic as it gets in this day and age.  Field engineer Pierre Bianchi, using only an 8 mic preamp and a computer, recorded the magic on front porches, back porches, at people’s houses and in historic landmarks, which are woven into the collective memory of the Mississippi.  This disc is totally lacking in gimmick or gloss, recorded on location. The songs are straight up blues and are each wonderful in their own way, but what really ‘puts you in the room’ for each track as it happens is the inclusion of extraneous sounds and banter between the band and their guests before each song; it’s almost as good as being right there.

On paper Muddy Gurdy seems, at best, like a well intentioned experiment that is unlikely to succeed.  In reality it’s one of the coolest blues albums of the decade- it’s out Feb. 2nd.

KEY CUTS:  That girl Is Bad, Rollin’ and Tumblin’, Shake ‘Em On Down