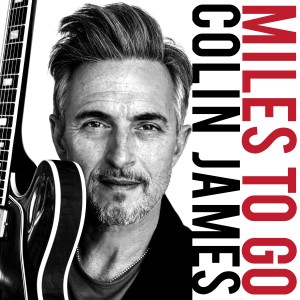 Colin James 19th studio album, due September 21st, is a tour de blues.  Miles To Go is a trip deep into the blues that fans will embrace enthusiastically.

When he recorded 2016’s Blue Highways (a disc of cover songs) with his touring band, it was always intended as the first of two installments.  Miles To Go was named after a song a 16 year old Colin heard James Cotton play at the Winnipeg Folk festival, and he opens and closes here with electric and acoustic versions of it.  This set is 2 originals and 9 covers of songs by artists like Howlin’ Wolf and Robert Johnson.  “You bring what you can” James says of the songs he covered. “If I feel like I’ve brought enough, then I put them out.  I knocked a bunch of songs off this record when I realized that I can’t bring anything to them that isn’t there already.”  He says he takes great delight in turning fans onto songs they might not have heard otherwise.

Though early in his career James’s label was concerned with him getting pop hits- and he gave them some- most of us think of him as a bluesman thanks to records like National Steel and even his swing record, 93’s Colin James & The Little Big Band.  I’m thrilled with Miles To Go: the song selection, and Colin’s evocative guitar playing, particularly  on the sparse See That My Grave Is Kept Clean, also covered by BB King on his final record; it makes the hair on my arms stand up.  Miles To Go is spectacular.

KEY CUTS:  See That My Grave Is Kept Clean, One More Mile, Need Your Love So Bad 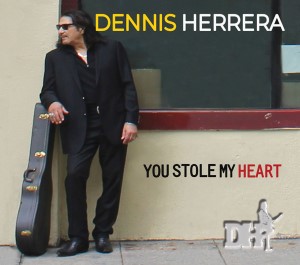 This is pretty upbeat and bright for the blues.  You Stole My Heart is Herrera’s 3rd album inspired by his everyday life, meaningful recollections that let loose into 11 toe-tappin’, danceable tunes- and people are loving it.

On first listen, Heart sounds like a smooth version of Elvin Bishop- good natured, well- played blues about life’s daily trials, not just ‘my baby what done me wrong’ sort of things.  The playing is tight, the band as a unit really swings, and as a guitarist Dennis sounds a lot like BB King.  I’ve said many times before that I prefer my blues dirtier, scruffier… but You Stole My Heart is growing on me.

You Stole My Heart was recorded by Kid Anderson (a name I’ve mentioned a few times recently) at his Greaseland Studios in San Jose, and produced Herrera and his keyboard player Rick Wenzel, so you gotta figure this thing turned out just the way Dennis wanted it to. This is a well mixed record, but perhaps a little too ‘clean’ for my taste- otherwise I would’ve likely rated it higher.

Perhaps what Living Blues had to say about this disc captures it best; “The Dennis Herrera Blues is a refreshing departure from the ‘badass’ image that so many white blues musicians feel is mandatory.  This alone makes (him) a welcome new face on today’s blues scene.”  You Stole My Heart IS a refreshing change from the sort of blues I usually listen to, and I think it might be the same thing for you too.

KEY CUTS: Fore, Look Out, You Can Name It 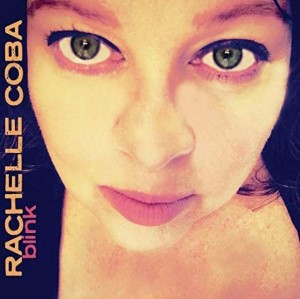 What a delightful surprise!  I’d never heard of Rachelle before and, other than blues, had no idea what to expect from this disc.  Coba and her band mine many different grooves within the blues over these tracks, and the end result is quite satisfying.

Following her 2014 release Mother Blues, nominated for “Best New Debut CD” by the Blues Blast Music Awards, Blink departs from traditional blues boundaries to feature the full range of Rachelle’s writing, guitar playing and singing.  The playing by all concerned is par excellence but what first drew me in here was Rachelle’s expressive voice, going from a whisper to (on occasion) a full throated roar that let’s you know she’s deeply connected to whatever lyric she is delivering.

On Blink Rachelle’s band includes John Ginty on keys, Paul Guzik on bass, Andrei Koribanics on drums, with a guest shot from Jimmy Bennett on dobro.  Each of these 11 songs delivers a different mood that takes you on a journey into the heart of blues & roots.  Like the bio I got with the CD says, “this ain’t your mama’s blues!”

Coba isn’t going for a vintage vibe here, not particularly, nor is she trying to re-invent the wheel.  Blink is a bunch of songs delivered with uncommon depth and emotion.  She sings it like she’s lived it- and isn’t that what the best blues is about?  Wonderful stuff.

KEY CUTS: Dance These Blues Away, River Of Blood, Blame It On The Blues 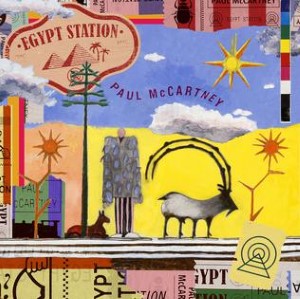 He’s a Beatle, he has 18 solo albums under his belt.  God knows that, at 76, if anybody has earned the right to put their feet up and relax, it’s Paul.  Instead, he’s decided to put out an engaging and captivating record for us all to enjoy.

First, the title; Egypt Station is also the name of a painting by McCartney and, in fact, the album artwork is derived from it.  I thought the title odd; is it the name of a tube station in London? No. “I liked the words ‘Egypt Station’” Paul says, “it reminded me of the ‘album’ albums we used to make.  Egypt Station starts off at the station on the first song and then each song is like a different station.  So it gave us some idea to base all the songs around that.  I think of it as a dream location that the music emanates from.”

How well you receive Egypt Station will depend on what you’re expecting.  As Mrs. Rock Doctor and I listened to it in the truck on the way home from Edmonton the other day, there were times when it reminded me of latter day Beatles, then of the open-hearted romantic guy that made albums like London Town and Flaming Pie.  Produced by Greg Kurstin for the most part with 3 songs done by Ryan Tedder, it doesn’t sound like a Jeff Lynne production exactly, but there’s a thickness to it that I think Jeff would enjoy.

I bought the deluxe version with 18 songs- that’s a lot of music, but there isn’t a single cut that I feel the urge to skip over.  Is Egypt Station the best thing Paul has done outside of The Beatles?  Probably not, but it’s definitely top 5.  I really enjoy this record.

KEY CUTS:  Who Cares, Come On To Me, Despite Repeated Warnings 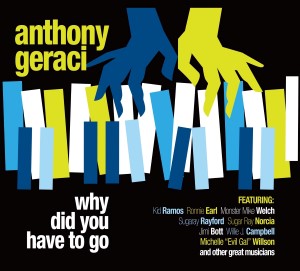 WHY DID YOU HAVE TO GO Anthony Geraci (Shining Stone Records) *****

A sweet disc of rolling piano-driven New Orleans-style bluesiness is what we have here, Fats Domino would’ve loved it.  Geraci has assembled an impressive cast to help realize his new album and the effort was well worth it- Why Did You Have To Go is amazing.

Some great blues guitarists took part like Ronnie Earl and Kid Ramos, plus some fine singers, drummers and bassists join in with Geraci’s animated piano playing style. “As a songwriter and arranger, I chose each musician for their individual talents that I knew would sound good on the songs they were playing on” Geraci says.  It sounds like casting a movie- get the right people and you’ve got something special.

Why Did You Have To Go covers a wide range of Anthony’s ivory-ticklin’ styles and influences, including several types of blues, R&B, and an excursion into jazz on the album closer A Minor, Affair. “(It) showcases my love for classic jazz recordings” Geraci states. “I also like to have a little fun with song titles.  This song is written in A minor, and the ‘Affair’ could be construed as either dealing with my music, or taken in a literal context.”

The musicianship is top shelf and the songs are engaging- Why Did You Have To Go is one of the most enjoyable albums of the year in ANY genre.

KEY CUTS: Why Did You Have To Go, Two Steps Away From The Blues, A Minor Affair 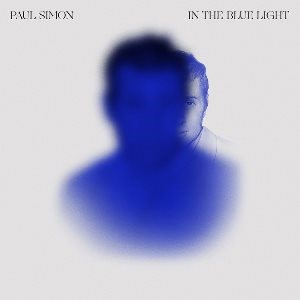 I thought Paul Simon was done making records.  In The Blue Light is his 14th solo album, a disc of re-recordings of lesser known album cuts from his catalogue.  According to Wikipedia, the title is a reference to the lyrics of the song How The Heart Approaches What It Yearns from 1980’s One Trick Pony.

Simon’s last two albums, 2011’s So Beautiful Or So What and 2016’s Stranger To Stranger are slightly off-kilter in that charmingly gorgeous Paul Simon sort of way- occasionally brilliant songs with witty, interesting lyrics.  By comparison, In The Blue Light comes across a bit stuffy.  This disc was recorded with several guests like trumpet player Wynton Marsalis and guitarist Bill Frisell, and some of the songs come off as lite jazz- not really my thing.

Simon is 77 now and I get that he wants to have one last look back at some songs that he may think have been overlooked, or perhaps this is a love letter to fans that have been along for the whole ride… but that doesn’t always make for riveting listening.  The light, delicate arrangements are well done, but I find myself missing Paul Simon the pop song craftsman that authored some of the 20th century’s best songs.  Putting on In The Blue Light is a meditative experience, and maybe THAT’S the point.  If my music collection was organized emotionally, this would go in the “thinkin’ about stuff” section.