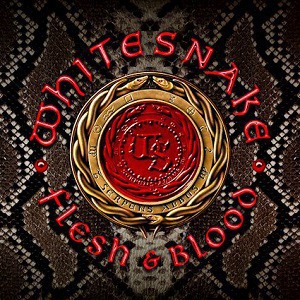 ‘Cock rock’- remember that from the 80’s?  Well it’s alive & well thanks to Whitesnake.  Flesh & Blood, due May 10th, is the sturdiest thing they’ve done since 84’s Slide It In.

I’ve been a Coverdale fan since he first surfaced with Deep Purple and so welcomed Whitesnake’s return to active duty in 2008, after an 11 year layoff, with Good To Be Bad. There have been a couple of albums (and several live releases) since; Forevermore in 2011 and The Purple Album in 2015, which is ‘snake versions of songs from Coverdale’s Purple days… but F&B is more fun.

Whitesnake’s self-titled hit laden 1987 slab may be their commercial peak, but this is cheekier.  Drummer Tommy Aldridge and bassist and Michael Devin compare to the Cozy Powell/ Neil Murray axis that drove Slide It In, and guitarists Reb Beach and Joel Hoekstra (his parents are classical musicians) play great bluesy, blustery rock that is Whitesnake’s calling card.  Joel has 6 co-writes here while Reb has 5, so they have a lot to do with how F&B turned out.  Oh- keyboardist Michele Luppi rounds on the current lineup; Coverdale chose his players well.

These songs have the same sleazy bravado that drove Whitesnake songs in the mid-80’s, and Coverdale’s voice is surprisingly fit- stronger and more assured since his ’08 comeback.  This is the record the Snake has been trying to make for decades and the one the fans have been wanting.  History will look kindly on Flesh & Blood.

KEY CUTS:  Good To See You Again, Shut Up And Kiss Me, Heart Of Stone 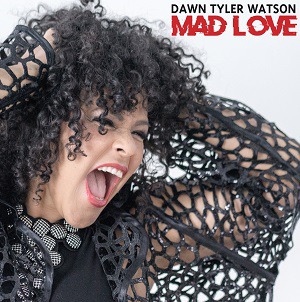 Montreal’s Queen of the blues follows up her pulverizing Jawbreaker from 2016 and  CRUSHES it.  Fantastic singer, great songs; nary a false note here on Mad Love.

This is Dawn’s 2nd album with the horn driven Ben Racine Band, a magic combination.  She digs deep for her songwriting- inspired by a tumultuous past few years and some personal heartbreak to yield bone chilling blues.  There’s great down and out tuneage here like Masochistic Heart, which will make you dance until you really hear the lyrics.

Watson was winner of the 33rd International Blues Challenge in 2017 in Memphis, the first Canadian ever and only the 2nd female artist to do so.  Guitarist/ arranger Ben Racine and producer Frankie Thiffault are perfect creative partners as DTW throws down many shades of blue on Mad Love.  Guests include Steve Marriner of Monkeyjunk and guitarist Steve Hill, who raise this soul infused R&B even higher.

The bottom line on Mad Love; a dozen great songs, a tight and hot backing band with one of the best chick voices singing the blues today.  It sounds like a bad breakup is at the heart of Mad Love but then you have to suffer for your art, right?  Dawn Tyler Watson has just given us one of the best albums of the year in ANY genre. 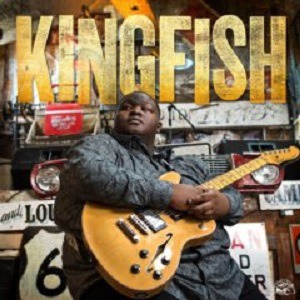 Once a generation a blues artist comes along to remind mainstream audiences how deeply moving the blues can be.  Meet Cristone “Kingfish” Ingram and get to know Kingfish.

Rolling Stone calls him “one of the most exciting young guitarists in years, with a sound that encompasses BB King, Jimi Hendrix and Prince.” The 20 year old with the deep voice and muscular playing style makes a big impression.  He hails from Clarksdale, just 10 miles from the crossroads of highways 61 & 49 where Robert Johnson cut his deal with the devil.  It’s odd for someone so young to ‘get’ blues this deep, but he says “in my town, every kid wants to be a rapper- I wanted to do something no one else was doing.”

Kingfish was produced by Grammy award winner Tom Hambridge (Buddy Guy, Susan Tedeschi, Joe Louis Walker). Ingram’s playing is blistering and his vocals are deep and soulful on these original songs. “People know me for my covers” he says, “(so) it’s important for me to release original music.” Label prez Bruce Iglauer says that “(Cristone) knows which notes tell the story and grab the audience, and leaves out the extraneous ones. He sings with the intensity and directness of a seasoned blues artist.”

Listening to Kingfish is exciting and soul cleansing, a blues baptism.  If I had to stop writing reviews today, I’d be okay because I’ve just heard the best. Available May 17th.

KEY CUTS:  Outside Of This Town, Fresh Out (with Buddy Guy), Love Ain’t My Favorite Word 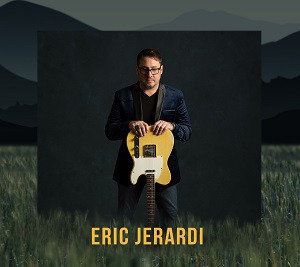 Part of what makes Occupied sound so great is producer David Z, who has worked with Prince, Fine Young Cannibals, Jonny Lang and Etta James.  Also involved is the legendary Muscle Shoals rhythm section and the Muscle Shoals horns, adding heft to these heartfelt performances.

Eric Jerardi began his musical career in 1989 by winning a battle of the bands contest at Ohio University.  Over the years he’s shared stages with Little Feat, Robin Trower and Jim Belushi at The House of Blues and he’s jammed with Keith Urban, Wynonna and Kenny Chesney in Nashville- dude gets around.  Occupied is 7 songs over 27 minutes, short and sweet, a mix of originals plus Don’t Take It Personally by Jerry Lynn Williams and Jeff Healey.  “I’ve put in a lot of hard work over the years, and this record is a reflection of my dedication to my craft” Eric says.

The cover, Eric with his Telecaster, shouts “BLUES!” but while there are threads of that throughout, Occupied is more blue eyed soul.  I’ve not heard any of Jerardi’s previous work and so can’t compare this to it, but this disc sure sounds and feels good.

KEY CUTS:  Don’t Take It Personally, Deaf Lead The Blind, Do Right By Him 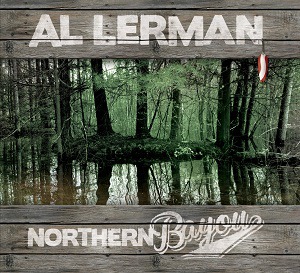 Lerman’s talent as a songwriter and storyteller shines here.  He sings about love, mortality, the joy of music, fishing, coming home, prejudice, sorrow and deception.  And talk about a great band; Alec Fraser (bass, producer), Lance Anderson (piano/ organ) and Chuck Keeping (drums).  This album has a lively vibrancy you can’t fake. Northern Bayou was recorded live in the studio over 2 days with minimal overdubs.; this is what can happen when a handful of seasoned pros and good friends get together to play. This level of fun and musical excitement is exhilarating.

Northern Bayou includes a cover of the traditional American song Deep Ellum Blues, about the tough Dallas neighborhood that Blind Lemon Jefferson and Leadbelly come from, the stomping rhythm is also really cool.  If you know Al from Fathead or even his previous solo stuff,  NB will speak to you loud and clear. This record should easily please fans and make new friends too. 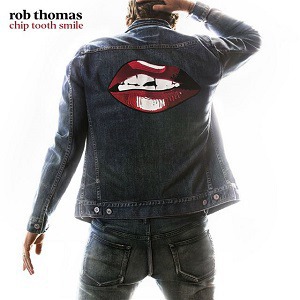 Here is the 4th solo record from the voice of Matchbox Twenty. Chip Tooth Smile is modern pop with scorching production by Butch Walker (Panic! At The Disco, Pink) and Benny Blanco (Ed Sheeran) that just might blow some wind up your skirt.

“I was writing about experiences I’ve been through that I could’ve only been through by getting older, by facing mortality, by having a son, by having a family, and by having responsibilities that I didn’t have when I first started out” Thomas says about the new record.  “It’s very autobiographical about where I’m at now and where I’m headed.” This is readily apparent in ballads like It’s Only Love but it’s also a thread that follows through more bombastic tracks like One Day Less (Dying Young), the successful first single.

Rob Thomas is one of his generation’s better songwriters, and Chip Tooth Smile makes the argument that he still has the goods.  Whether he’s channeling his inner Phil Collins on Early In The Morning or trying to fill the dance floor with the chest beating bravado of  I Love It, there’s an emotional honesty to Rob’s lyrics that reflects your life back at you.  That can get uncomfortable but it’s also where Smile’s magic lies.

The lush production on some of the ballads is a nice counterpoint to the overly dense, crunchy up-tempo ‘modern’ tracks and more preferable, at least to me.  Chip Tooth Smile stakes out a wide swath in the pop landscape, but the personal nature of Thomas’s songs make this disc worthy of repeated listens.

KEY CUTS:  Early In The Morning, One Day Less (Dying Young), We Were Beautiful

What does a good time sounds like?  This.  Hip-Shake is the spirited follow up to last year’s acclaimed Don’t Let The Devil Ride and holy cow can Bob blow some harp!

Do The Hip-Shake Baby! is 13 songs culled from recording sessions between 2016 and 2018 that feature an array of amazing guests too lengthy to repeat here, talented guitarists, piano players and in-the-pocket rhythm sections that give Corritore’s hot harmonica room to grind and play.  It’s blues, R&B, soul and gospel/rock that entertains and soothes.  Recorded at Kid Andersen’s increasingly famous Greaseland Studios, Bob’s 14th album will leave you wishing you were more familiar with his other records.

When I first put this on I was farting around the music room- probably tidying up- but before long I forgot what I was doing and just listened.  Hip Shake recalls an earlier time in rock & roll when lines between genres were blurrier and bluer than they are now.  The spirit recalls those early Stray Cats records, that fun vibe of guys picking up their instruments and playing because it feels good.  There’s some cool jump blues here like Shake Your Hips, plus some excellent slow n sleazy grooves like You Better Slow Down. Production is robust, so you can really feels these guys when they play.

Do The Hip-Shake Baby is old school yet not trying to replicate a 50’s or 60’s listening experience.  Fresh, vital and deep… this is a keeper.

KEY CUTS:  Shake Your Hips, You Better Slow Down, I’m Gonna Keep What I’ve Got 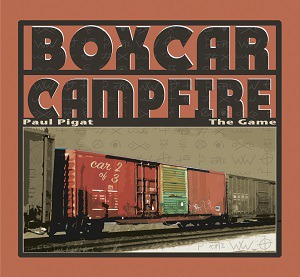 Blessed with a jazz man’s sheen, a rockabilly heart and a hobo’s soul, there aren’t many types of music that don’t tickle Pigat’s imagination.  Recalling Hoyt Axton and Randy Newman, The Game has an enjoyable satirical flavour.  Most of the songs are just Paul, his acoustic guitar and voice except Piece of Work, where producer Marc L’Esperance plays percussion for a song that stands out and apart from the others.

Pigat wrote or co-wrote most of these songs. Interpreting the music of others is a considerable skill and Paul’s slowed down, strangely compelling version of Johnny Cash’s Ring Of Fire has an arrangement that would feel at home on one of Johnny’s latter day comeback discs. Hartland by T. McNeil is here too as is a cool version of W. Kimbrough’s Piece Of Work. It’s not a stretch to call this fairly intimate work.

More than once while listening to The Game, Pigat’s guitar playing reminded me of Bruce Cockburn, another fine player with, at times, a cheeky sense of humour.  Paul’s playing ranges from delicate to energetic and physical, and it’s a pleasure to listen to this acutely talented guitarist- I love the stories but I love his playing too.  This is a good one to talk you down off the ledge after a hard day in the rat race.