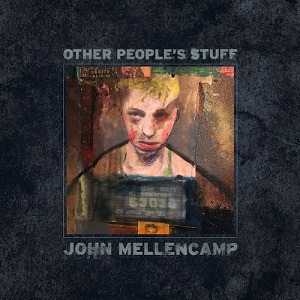 Tried to get to this before Christmas but ran out of road, steam, and I-Tunes cards. Other People’s Stuff came out December 7th and its songs from album sessions, documentaries and the like. It’s remarkable how well this hangs together as an album.

Other People’s Stuff stirs similar feelings as The Lonesome Jubilee- there’s something earthy about how I connect to these tunes.  “These are songs that have been recorded over the last 40 years of my career, but have never been put together as one piece of work” Mellencamp states, Sources for these 10 tracks include Human Wheels (93), The Songs of Jimmie Rodgers- A tribute (97), Trouble No More (03), Rough Harvest (97), Sad Clowns & Hillbillies (17), The Rose & The Briar (04), An Interpretation Of Stevie Wonder’s Songs (03), plus a National Geographic documentary and a song originally performed at The White House in 2010… and yet Stuff feels like a fully conceived album.

Other People’s Stuff has a bluesy, elemental vibe that, while fairly removed from JM’s hits of the past, feels like it’s in line with the direction he’s been heading of late.  Nothing here like Jack & Diane or R.O.C.K. In The USA, but more like the deeper album cuts that surround the hits.  OPS is a rich and coherent thread from Mellencamp’s past that, if you’re anything like me, will lead you to re-examine the sources these songs came from.

KEY CUTS:  In My Time of Dying, Dark As A Dungeon, Stones In My Passway 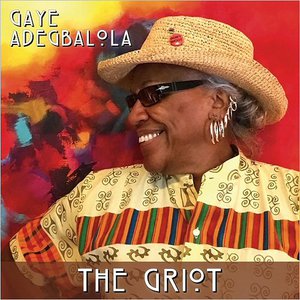 A griot is a West African historian, storyteller, praise singer, poet or musician- that’s Gaye Adegbalola.  Griot is perfectly titled, with Gaye as a repository of the sacred oral traditions.  She calls this disc ‘topical blues for topical times’, and that’s just what it is.

If you’re not paying close attention Griot might just feel like another blues album- not that there’s anything wrong with that- but Adegbalola addresses many contemporary issues in these 17 cuts such as sexism, mental illness, technology and yes, love.  On the back cover of the disc where the songs are listed, the corresponding theme addressed by each track is listed too.  This is the kind of album you can enjoy ‘as is’, but it will also take you much deeper if you’re into that.

The subjects dealt with in these songs range from history (Nothing’s Changed) and sexism (FGM- female genital mutilation), to more humorous stuff like 3 Hour Shoes which talks about vanity, and Liearrhea­ which takes aim the current political climate.  Gaye was a member of  Saffire- The Uppity Blues Women until ’09, and she was once Teacher Of The Year for the state of Virginia.  At the age of 74 she’s seen and experienced the kinds of things that give her the authority to sing songs like these.

Griot is a history lesson and social commentary wrapped in blues and roots music, superbly played and produced.  This is a meaningful and joyful experience. 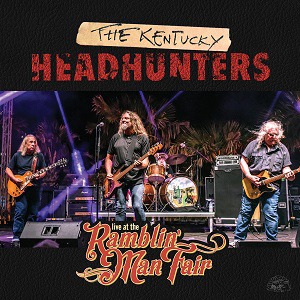 LIVE AT THE RAMBLIN’ MAN FAIR The Kentucky Headhunters (Alligator) *****+

The Kentucky Headhunters have just released one of the best live albums EVER. Live At The Ramblin’ Man Fair is pulled from a 2016 performance at the festival during the band’s first ever European tour. “We didn’t even know we were being recorded” says guitarist/ singer Richard Young. “I found out later the festival folks recorded our whole set. After hearing it, I knew it captured us exactly as we really are, and I knew we had to release it.”  I’m sure glad they did and after you hear it, you’ll be glad too.

Back in ‘89 I came to know of The Headhunters through their hit Dumas Walker and, like the idiot I can be, wrote them off as merely a quirky country band.  In 2015 they came to my attention again but this time I got it and I’ve been into them ever since.  My favorite rock & roll is blues-based, so Live At The Ramblin’ Man Festival plays straight to my heart. This is old-school blues and blistering Southern rock with country elements as The Headhunters cross borders and genres with ease in a truly electrifying set.

The heat from Live At The Ramblin’ Man Fair must be heard and felt to be believed. “When the four of us get together, it’s a powerful thing.  It makes people happy, it’s really good music” Richard says.   The disc also includes 3 studio tracks unearthed from the sessions with Chuck Berry’s piano player Johnnie Johnson in 2003, released in ’15 as Meet Me In Bluesland.  Ramblin’ Man is the sound of greatness.

KEY CUTS:  Ragtop, Have You Ever Loved A Woman, Rock Me Baby 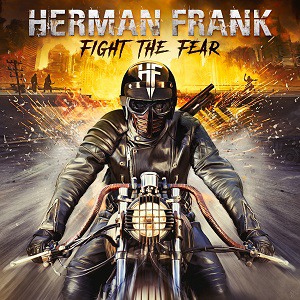 This is the 4th solo outing for the former Accept guitarist, and it’s exactly what I wanted it to be. Fight The Fear is walls of grinding riffs in lock-step that recalls Herman’s old band.  It’s almost like time-traveling back to the early 80’s metal scene

Herman Frank’s band also includes Masterplan vocalist Rick Altzi, guitarist Heiko Schroder, former Rage drummer Andre Hilgers and bassist Michael Muller, who work together with pinpoint precision.  Some classic riffs here that all seem to hang on Hilgers’ double kick drumming; and of the subject matter of the songs Altzi says “Mankind seems to have a short memory and keeps on doing the same mistakes. How do we in modern times still let religion dictate and form the decisions made by people and governments?” he asks. “But there’s still enough room for love songs and rock & roll!”

Fight The Fear is, for lack of a better term, classic metal- but it’s the kind of rock & roll I enjoy best.  Palm- muted riffing that implies a relentless locomotion to get you up and going, with Rick Altzi’s savage yet tuneful growl putting the lyrics across with energetic purpose.  The music itself packs quite a wallop, opting more for physicality than speed…  it sounds like Accept meets Halford, Rob’s band just before he rejoined Judas Priest, although the tunes here aren’t quite as memorable.  The playing is solid and vicious, just what you want from a guy that used to be in Accept- I’ll take it! Due out February 8th,

KEY CUTS:  Until The End, Stay Down, Lost In Heaven 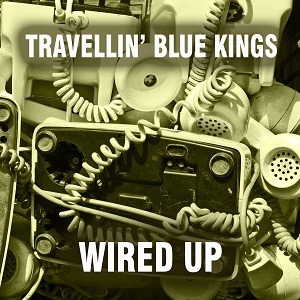 Some blues from Belgium, a joyful mix of styles within the genre ranging from Texas to America’s west coast, across to Memphis as it heads for Chicago before dipping its toes in the British blues boom.  Wired Up is the blues from everywhere, for everybody.

Wired Up is TBK’s debut, coming together after these four guys plied their trade on festival stages in Sweden, Norway, Poland, Germany, France, Switzerland, the UK, Italy, Belgium and The Netherlands.  They are Stephen Hermsen on vocals, harp and guitar; Jimmy Hontele on guitar; Winnie Piinckx on bass; Marc Gijbels on drums. The band website has no details on what these guys did before forming Travellin’ Blue Kings, but there’s an ease and comfort with each other as they play… perhaps that’s their individual immersion in the genre before pooling their talents together that does it.

Other than some echo and delay, Wired Up it has a very natural sound- an uncluttered, unforced mix of originals and judicious covers.  Rather than trying to force things through studio trickery, they simply play the songs and let them unfold as they should for us to discover.  There’s an energetic joy, sophistication and simplicity in this album that is immensely appealing. Travellin’ Blue Kings are the real deal and Wired Up is some fine company.  Release date is January 25th worldwide.

KEY CUTS:  About This World, I’m A Good Man, Into The Night 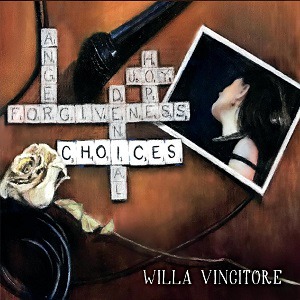 Some good stuff this week, but this one’s a mind blower.  Choices is the second effort of this Hudson Valley, NY-based singer, a follow up to 2017’s Better Days, and it’s all kinds of excellent- a nervy blend of pop, blues, jazz and soul.

When I listen to a singer for the first time I look for things like pitch control and a natural vibrato that doesn’t sound like they’re trying to show off.  My first thought when I threw this in my CD player was “Wow, she’s REALLY good.”  Production and musicianship on this disc is top shelf too- anything less and she wouldn’t have been able to put this out.

I like and concur with what Professor Johnny P’s Juke Joint says about Vincitore; “She can sing like an angel and a demon… (she) is a great singer in a field populated by good singers.” Choices is all original songs except for the remake of Annie Lennox’s Money Can’t Buy It that ends the disc.  Lennox, another great singer- it takes guts to cover one of her songs, and Willa acquits herself nicely.  The original material covers a wide emotional range, and Vincitore gives each just what it needs in terms of emotional heft.

Though it was released on December 14th, I’m just getting to this now.  I’m calling Choices the first great album of 2019.

KEY CUTS:  Just Ain’t The Same, Money Can’t Buy It, It Is What It Is