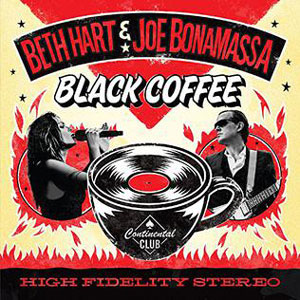 Black Coffee is the 3rd collaboration between Beth and Joe, an album of blues covers of frightening intensity.  Produced by Kevin Shirley (Led Zeppelin re-issues, Chickenfoot, Rush, Black Country Communion), it is a powerful disc; this is blues that rocks.

I found this at Blackbyrd Myoosic on Whyte Avenue in Edmonton on Record Store Day weekend, amongst other tidbits and treats.  As his credits indicate Shirley is a rock producer, and that sensibility is felt on these tracks. Hart is an intense singer, Bonamassa’s muscular style of blues guitar is the perfect counterpoint to her impassioned vocals, and Kevin Shirley balances their individual firepower perfectly. Of course, having Anton Fig on drums holding down the groove doesn’t hurt!

I was turned on to Beth Hart by a friend I occasionally play guitar with, and I’ve been aware of Bonamassa mainly since his collaboration with Glenn Hughes, Jason Bonham and Derek Sherinian in Black Country Communion. Beth and Joe’s first collaboration, Don’t Explain, fueled my passion for the blues and I’ve been along for the ride since.

Named after a song by Ike & Tina Turner, Black Coffee covers all the blues bases from good times, to betrayal, to salvation.  Recorded for the most part in Vegas over 4 days in August of 2016, this disc has tons of spontaneous energy and you can really hear the sparks fly.  There are 10 songs in all, some of which you may not be immediately familiar with…but then there are great versions of Lucinda Williams’ Joy and Howlin’ Wolf’s Sitting On Top Of The World that are surely worth the price of admission alone.

KEY CUTS:  Sitting On Top Of The World, Damn Your Eyes, Lullaby Of Leaves 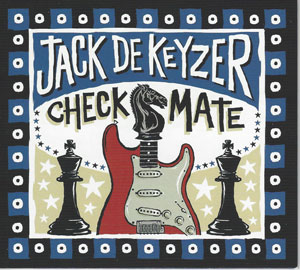 Wow, what an album!  On Check Mate, 2 time Juno/ 7 time Maple Blues winner Jack DeKeyzer pays tribute to the mighty Chess Records catalogue with spectacular results.  If guitar-based blues is your thang, this is one album you’ve got to have.

Playing blues and jazz festivals the world over, DeKeyzer is an articulate, expressive and powerhouse guitar player.  Check Mate features new arrangements of Chicago blues classics by the likes of Willie Dixon, Otis Rush, Howlin’ Wolf and Elmore James, plus breathtaking versions of two Robert Johnson classics.  Scene Magazine out of London praises Jack’s playing as “impeccable virtuosity” and, as a player, there’s a reason Blues Revue describes him as “A coveted super-hero in Canada… blends blues with elements of jazz, soul, r&b and early rock & roll.”  All of that goes to say that, while he’s a blues guitarist, his playing is multi dimensional.

Check Mate was produced, recorded and mixed by DeKeyzer himself, and beautifully so I might add.  As a singer he reminds me of a young John Mayall more often than not- not flashy, but expressive and he gets the job done.  His band is excellent and in the pocket but let’s face it, we’re here for Jack’s tasty guitar playing; he doesn’t disappoint.  From the slow blues of Double Trouble to an upbeat walkin’ tune like BB King’s Days Of Old DeKeyzer and the boys jump, swing, groove and get down with satisfying results.

Jack DeKeyzer has a dozen CD’s out now, and each one I’ve heard has been a swingin’ blues adventure that stands up to repeated listening.  Check Mate’s salute to these Chess Record staples is classic blues in every sense of the word, and destined to hog my CD player for a very lone time. 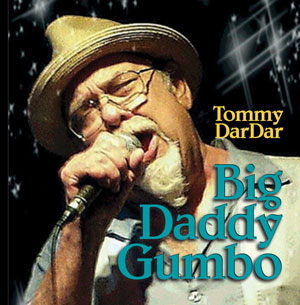 The final word from Gulf Coast blues legend Tommy DarDar, who passed away last summer.  Work had begun on Big Daddy Gumbo in 2001, but life and financial considerations got in the way.  His drummer and musical compatriot Tony Braunagel, took it upon himself to gather DarDar’s friends and fellow musicians to take those unfinished recordings over the finish line… I’m sure Tommy would approve.

Tommy’s career spanned 40-plus years and included stints and/or gigs with Lightnin’ Hopkins, Jimmy Reed, John Lee Hooker, Bo Diddley, Willie Dixon, The Neville Brothers and more… you know, blues royalty.  As DJ James Nagel, a/k/a “The Blues Hound” says, Tommy “had a swamp water voice and gumbo in his veins. The world was a better place with Big Daddy Gumbo in it and a little colder now that he’s gone.”  Indeed, DarDar’s singing voice is deep and rich here… you get the feeling that he’s intimately familiar with the subjects he’s singing about.

Big Daddy Gumbo started with the 9 tracks originally recorded at Ultra Sound Studios in Studio City, California in 2001 with core musicians Tony Braunagel (drums, producer), Hutch Hutchinson (bass), Jon Cleary (piano) and Johnny Lee Schell (guitar).  To complete this album more help from friends was needed, and the result is a swamp blues masterpiece to be shared with fans, and the entire world.

There’s an easy, spiritual vibe to these songs that you’re really going to enjoy.  Tommy DarDar was a gifted songwriter, a powerful singer and a talented harp player. The reason for this album being in our hands is sad, but Big Daddy Gumbo is really a celebration of the life Tommy lived and loved.  We can all use a little of his magic in our lives.

KEY CUTS:  Headed Down To Houma, Dangerous Woman, In My Mind 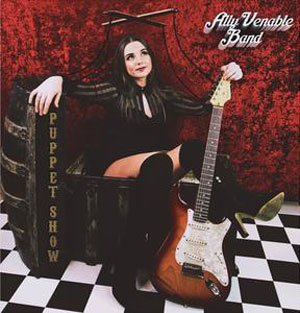 A soulful, rockin’ blues record here, Venable’s second for Connor Ray Music.  Winners of “East Texas Blues Band Of The Year” for the past 3 years, the Ally Venable Band is the real deal.  A trio led by the 19 year old guitar sensation, it sounds like they’ve been drinking from the same fountain as Stevie Ray Vaughan & Double Trouble.

I shouldn’t be surprised by Ally’s mastery of the blues at such a young age- You Tube is packed with videos of young ladies that can shred- but somehow I am.  I thought the blues took a certain level of maturity and life experience to execute well, but I suppose there are exceptions to every rule.  The Ally Venable Band is Ally Venable on guitar and vocals, Elijah Owings on drums, and Bobby Wallace on bass.   Special guests on these sessions include guitarists Gary Hoey and Lance Lopez, plus keyboardist Eric Steckel.

Puppet Show starts off with the powerful Devil’s Son, featuring a haunting riff and Gary Hoey on lead guitar. “I had a blast guesting on the song” Hoey says. “Ally has a maturity as a songwriter beyond her years and her guitar playing and singing are the real deal.” The whole album has a soulful grease and grit to it that demands it be taken seriously.  Cute chick leading a blues band is no gimmick here; Venable, Owings & Wallace can flat-out wail, and they do it with soul to spare.

Lopez, a mentor to Ms. Venable, says “Ally has been working very hard to become the Guitar Slingin’ Senorita she is. It’s been such a pleasure to share my knowledge with her and watch her grow!”  Puppet Show is no novelty- this girl (and her band) have the right stuff.  The disc is full of great songs, grooves and guitar playing- extremely cool.

KEY CUTS:  Devil’s Son, Backwater Blues, Waste It On You 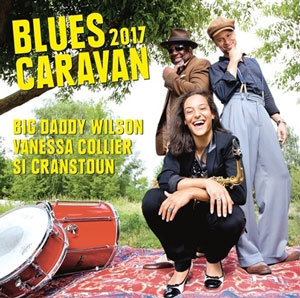 Si Cranstoun, inspired by the vintage soul of Jackie Wilson and Sam Cooke, is a British bandleader who comes from busking on the streets of London, rising to the top of the vintage R&B scene. Big Daddy Wilson, originally hailing from North Carolina, served in the US Army, then discovered the blues and relocated to Germany. He won the 2010 German Blues Challenge and Best Blues Artist at the 2014 Blues In Germany Awards.

The final piece of the puzzle is singer/ sax player Vanessa Collier, a graduate of the Berklee College Of Music, lighting up stages everywhere as a part of Joe Louis Walker’s band, and her set is the high point of the Blues Caravan.  “I think that wonderful things happen when you get more than one artist in a room” she muses. “With Big Daddy Wilson, Si Cranstoun and me, we all have our own styles and personalities onstage that meld well together”, and indeed she’s right.

The 3 vocalists are backed by a sweet band; Laura Chavez on guitar, Roger Inniss on bass and Markku Reiniainen on drums. The Blues Caravan CD holds 14 numbers and the DVD 16, so you need to watch and listen for the full experience.  Recorded live at The Hirsch Club in Nuernberg on Valentine’s Day last year, the singers take turns in front of a surprisingly older crowd- but then music has no age limits, particularly the blues.

Big Daddy Wilson’s performance is the deepest, Vanessa Collier’s the liveliest, but Si Cranstoun is a fine blues singer who blows a mean harp and plays guitar too.  Pick a winner?  Collier, but overall Blues Caravan 2017 is something I’ll experience repeatedly.

KEY CUTS:  Poisoned The Well (Collier), All Around The World (Cranstoun), Walk A Mile In My Shoes (Wilson) 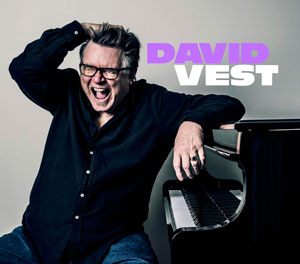 The look of sheer joy on David Vest’s face on the album cover is surely no accident- he’s just put out one hell of a record.  A mix of jazz and blues with a touch of old fashioned pop song craft, this is one of my favourite discs of the year so far.

Though he’s a multiple Maple Blues Award winner and has lived in Canada for quite some time, Vest is a southern bred boogie-woogie piano player and blues shouter who originates from Huntsville, Alabama. Musical history courses through this dude’s veins; he opened for Roy Orbison on New Year’s Day 1962 and has jammed with Ace Cannon, Bill Black’s Combo, The Jimmy Dorsey Band, and Big Joe Turner.  Now, at age 70, Vest is making elemental rock & roll, boogie ‘n’ blues that those cats would’ve dug.

This self titled effort was recorded on Vancouver Island, unlike his previous Canadian albums, which were tracked in Toronto.  Saying a musician has ‘chops’ is akin to calling them a great player, and David and his band (Billy Hicks of Powder Blues on drums, bassist Ryan Tandy plus guitarists Tom Bowler and Peter Dammann) have chops to spare.  Even on a boogie number like Crocodile you can feel the jazz level of skill with which these guys swing.

David Vest was recorded live off-the-floor, with live vocals and minimal overdubs which, in part, explains the vital, infectious energy of this record.  The other part of that equation is great songs; 7 of them are originals and they cover Huey P. Smith’s Genevieve, Leak In This Old Building (written by Elvis & Vera Matson) and the traditional Gotta Travel On.  The skill with which the band attacks these songs is impressive, and the joy with which they play makes this a pleasure to listen to.

If you’re into blues with heaping helpings of jazz and early rock & roll, David Vest is an essential addition for your music collection.  LOVE this album!

KEY CUTS:  Party In The Room Next Door, What’s The Matter Now, Gotta Travel On