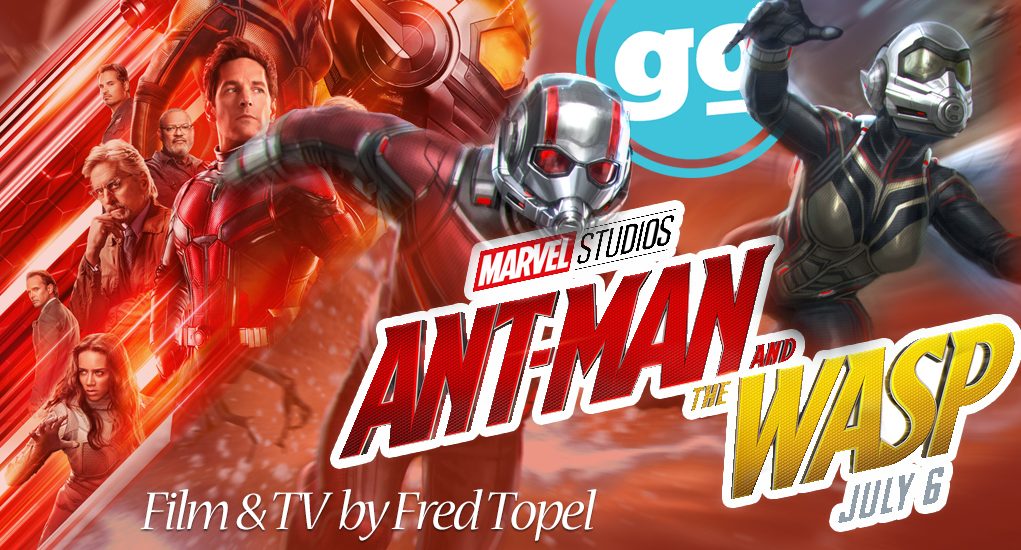 Guardians of the Galaxy was the first Marvel movie that established that these could be flat out comedies. Ant-Man inherited the mantle by hiring comedy star Paul Rudd to play Scott Lang. Now even Thor movies are comedies, and Ant-Man and the Wasp continues the trend.

G: Paul, this is actually the third time you played Ant-Man. How did you and Peyton approach this not only as the sequel to Ant-Man but a sequel to Captain America: Civil War?

Reed: I’ll start. It’s a really good point you make. It is a sequel to both movies. What was cool about Captain America: Civil War is we could not ignore what had happened to Scott Lang in that movie in this movie. It gave us an organic jumping off point because my first reaction was what would Hank Pym and Hope Van Dyne think about Scott taking the suit and getting involved with this fight with the Avengers. Well, they’d be pissed off. So it gave us this whole starting point where it was like what if they were estranged at the beginning of the movie as a result of this. There are ramifications of the Sokovia accords and Scott being on house arrest. It gave us a really natural starting point from the get go.

Rudd: one of the things that was kind of nice is it gave us, I felt, a little bit of leeway to lean into something maybe a little harder than we would have been able to at first because now the character’s been established. We’ve seen Scott in two other films. People buy the abilities, they buy me in the role, they understand the rules. So it felt as if we had a little bit more freedom to play into the humor. Would Scott do this? Would he say this kind of thing? Would he make this kind of choice? Whereas the first time around we were still modulating. That was one of the really fun parts about this was I feel like we went into this, let’s try it. Let’s go. People know who this guy is already.

Q: What was the decision not to make Ant-Man 2 but make it Ant-Man and the Wasp?

Lilly: Originally, Wasp was going to be introduced in Captain America: Civil War. That was the original plan. I never expressed it at the time, because of course how can you? Secretly I was like oh, she’s not going get an origins film. Oh well, it’s okay. I’m just stoked to be here, dude. I’m just happy that I get to put on the suit. Then when I got the call saying, ‘We’ve decided not to put you in Civil War,” there was this moment I could tell where the feeling in the room was like, “I’m sorry, don’t be offended.” I was like no, are they going to say what I think they’re going to say? Then they said what I thought they were going to say which is, “because we really want to dedicate a film to introducing this female superhero and we don’t want her just to be a side note in this larger story.” That was so exciting for me. I still didn’t know there was going to be double billing. That didn’t come til later and that was presented to me as a surprise by e-mail  with a screencap of the title.

Q: What were your favorite Wasp moments of this film?

Lilly: Well, I loved getting to be a blade runner. That was pretty cool. The knife gag in the restaurant scene was very cool. I love the element of having somebody who’s completely in jeopardy but also completely in control. As a superhero, I saw that a lot like when the mallet comes down to hit her. You can see, this oh sh*t moment but then she’s completely in control the next second. It was just fun to finally get to see her take on the mantle, because this is something that she’s been ready and willing to do basically her whole life. Her parents are both superheroes and she was rearing to get in that suit for an entire film. We never got there, so to actually see her fighting in that moment was wonderful.

Q: Whose idea was it that Wasp is better at her suit than Ant-Man?

Rudd: I think that Hope was born into the family business. I think in the first one it was pretty clear, she would be really good at this. It didn’t seem to have any sort of anything getting in the way of it, ability-wise, clearly. The idea that Scott was never really sure how he could be Ant-Man and still be a good parent, that those two things can coexist, that’s really what we wanted to hang this thing on, that dilemma. So one of the things that I like about it s that it does, it really is a duo and a team. We work together and I think we work together really well. But you’re absolutely right. I think from the get go, clearly, she’s really good at this.

Q: How did you hone your editing to establish the pace of the movie, ramping up to the climax that goes between the street chase and the Quantum realm?

Reed: We knew that sequence, we were going to be crosscutting between the chase and the Quantum Realm, and both inform the other one. It’s just a matter of going through the whole process of how tight can we make it, shifting things around. You always have a plan going in and we were really meticulous in the way we planned it. Then you get in the editing room, you discover things and it’s a whole nother part of the process. What if we put this here and did this? Just constantly refining the thing. We wanted it to be as tight as possible. We always had this Ant-Man philosophy on the first movie and this one, I always want these movies to be under two hours, firstly because they’re comedies and secondly because the first one was sort of a heist movie. This is still sort of a crime/science fiction/Elmore Leonard novel as a Marvel movie thign. It needed to have a lot of forward momentum. We looked at a lot of things from Bullitt, the Steve McQueen movie, and of course What’s Up Doc? the Bogdanovich movie which has the most insane chase through San Francisco. These were big inspirations to the movie. It was trying to get everything to work and be as tight as possible.

Q: Paul, how was it channeling Michelle Pfeiffer when her atomic version possesses you?

Rudd: I feel like I’ve been doing that for years. Every time we would refer to that, we kept calling it the All of Me sequence. We had many conversations about it early on. This seems like a fairly big swing. It was surreal to say the last. There are those moments as an actor, you have to buy into the scenario and you’re playing the truth of the moment. But at the same time, as me being me and Michael being Michael, when I had my hand tenderly to his cheek and I’m staring in his eyes, we giggled a couple times.

Q: Was Michelle on set that day?

Rudd: Oh, I would never have been able to do that with her there.