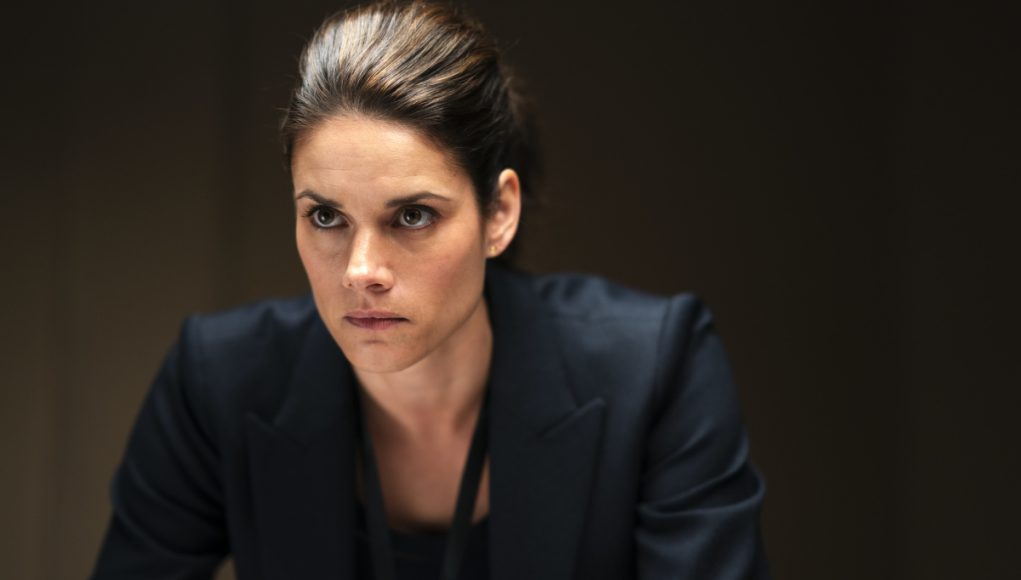 Peregrym was on a Television Critics Association panel for FBI in Los Angeles this summer and Gonzo was there to hear her talk about her new show. FBI airs Tuesday nights at 9PM on CBS.

Gonzo: Because of the roles you’ve played before, did you come to FBI feeling ready?

MP: Yeah, kind of. It would’ve been nice to speak to some more FBI agents and get an idea of that, but at the end of the day, when you’re doing a show, as much as there’s a reality to the situation, it’s kind of the writers to put in what they want for the character and how much they’re going to take from real life. I just had to trust the fact that I would be able to adapt and do that. The police stuff definitely helped because I feel super comfortable with firearm and doing all those things. It was kind of a no brainer which was nice, because it was really intense. It scared me to take this job. Showing up on set the first day with Dick Wolf and his camera over here and every producer. I was like oh my God, I’m going to get fired. I was really nervous but as we’re developing and we’re continuing, we’re kind of getting a real sense of what this show is. This is kind of the most exciting part.

Gonzo: Did you get the sense Dick Wolf really wanted you for this?

MP: Well, no, because that doesn’t come from him. It’s just my agents are like, “Hey, they’d like to know.” It could be casting. I flew in Saturday after work, went to a cast dinner totally jet lagged, had the read through the next day and that’s when he sat me down and told me why he fought for me. Really, he fought for me because I guess they auditioned a lot of other women. There’s a lot of women who could do this, really. There’s a lot of talent out there. Again, it’s just one of those things where I’m like thank you. I’m a firm believer in whatever job you’re doing, do  your best work. Whatever it is that you’re doing because for me, I’m a horrible auditioner. It’s just a fact. That’s not how I get work. So far in my career it’s been one thing that leads to the next. This is just a huge but another example of somebody having an idea for something that I had nothing to do with and I got an opportunity from that. I’m really grateful.

Gonzo: What specific things made you afraid you’d get fired, and how did you beat them?

MP: There was a day, I think it was day three. There was the director, the creator and then Dick Wolf. There’s also Arthur, the editor, and he’s watching the monitors as well. I got three different notes for the next take, but all of them told me separately. So Niels [Arden Oplev], the director, told me there was sarcasm in this and hit the sarcasm a little more. Okay, show runner, Craig [Turk] tells me, “Just remember that a little boy died 36 hours ago.” Okay, that’s grief and sorry. Then all of a sudden we get pulled aside, me and Niels and Peter [Jankowski], one of the producers was like, “Dick wants to talk to you right now.” So I’m like, I’m getting fired. That’s what’s happening right now. So we had to walk all the way around the set. The set’s stalled because we can’t do anything until me and Niels get back. It felt like the walk of shame. I was like all right, well, I know my parents and friends really love me for who I am so it’s fine. I get over there and Dick just looks at me and goes, “You that motherf***er.” And I’m like, “That’s a note, great.” At the time you’re not going to go, “Yeah, but Dick, Niels said this and Craig said this, so how am I going to do it?” I just sat there and I was like I don’t know how I’m going to do it but I hope to God I pull it off. You gotta go right back into it and just hope you can incorporate this and make people happy.

Gonzo: When you moved to New York for the show, did somebody help you?

MP: Therese, who does hair, she was like, “Oh, I have a friend. He’s a real estate broker.” I was like okay, I have to use a broker, what? Can’t I just find it? Where’s Zillow? I’m so used to doing that. We really only had one spot we could get into because of the dog and having furnished, we didn’t have too many options. Where we found is so great. Like I said, I’m really happy to be there now. It only took a weekend for me to feel like I’m more comfortable here than I’ve ever been in L.A. which I find really fascinating. I think it just attracts different people.

Gonzo: Do you get any say in your FBI wardrobe?

MP: So I don’t have to wear a uniform. You’ve got the FBI jackets and stuff like that. Again, that’s something we’ve just figured out because we’re trying to find out own thing of what are the rules here with that? It’s a tricky thing. You have a bunch of different personalities and people who are there. There’s actually a lot of women in the FBI which is also something that I didn’t know at all. They express themselves. They dress whatever way they want to. They’re professionals. They’re pros. It’s more about what they do than how they look. It’s been a fine line of picking that wardrobe. I’m not trying to set any fashion trends here. I’m doing my job. I don’t want people to even notice really what I’m wearing. I just gotta be able to run and do what I gotta do.

Gonzo: Do you have to run in heels?

MP: Maybe. I’m not really sure. This is where it’s also different from Rookie Blue because I was on the street and I was tackling. That was really fun but I’m 36 now. I don’t need to be doing that. That’s okay.

Gonzo: Have you gone down any rabbit holes of FBI research?

MP: Yes and no. They did give us some information they want us to read. There’s a book called FBI. It’s like The Threat Matrix and I’ve gotten to chapter three and I’m like what is happening here? What happened that time? So again, my brain doesn’t go into wow, this is really fascinating, what a neat story. I’m like that is real time could happen right now, and I get freaked out. There’s a very fine line for me of doing the research and actually being able to trust what my job is and not going down that hole because I’m pretty negative about it. I get scared, then I get fired up. So I’m like well, hold on a second here. This guy got away with this. It’s awesome to speak with FBI agents. I get taught things, even in interrogation like don’t cross your arms. I’m like why? He goes, “Because you look defensive and you’re going to make the guy who’s in there defensive just by your posture.” So it made me think about my life too and how I carry myself. That kind of stuff is very interesting to me, how you deal with people in these situations. That’s what I hope to get to know more of. That’s the stuff I want to see and learn about as the show goes on is how do we do good with all this other stuff that’s happening? Where’s the good stuff?

Gonzo: Have you learned your way around New York?

MP: Yes, oh my goodness, even the pilot was like Harlem, Bronx, Queens, Brooklyn, Manhattan, Long Island. I’m like how big is this place, honestly? And I feel really misled by people who are like, “I’m from Brooklyn.” I’m like it’s humongous. That tells me nothing. It’s a fascinating place.