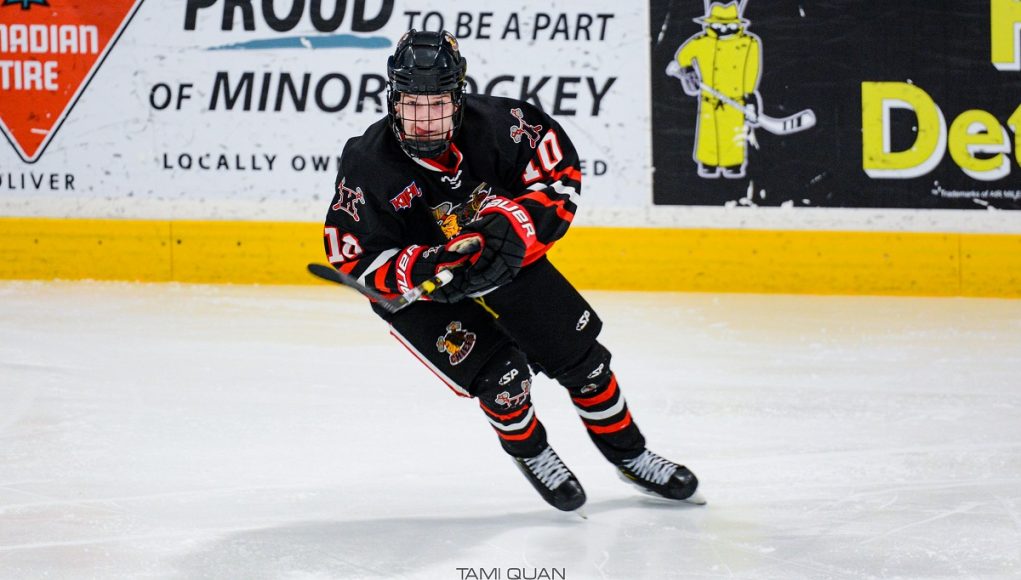 Leo Harju answers each question with patient delivery to make sure he is answering properly.

His English has improved thanks to his efforts put in while studying the language at the Kelowna International Gateway. He came from Oulu, Finland to learn the language.

“I think my English has been getting more better,” says Harju, who is also a rookie with the Kelowna Chiefs in the Kootenay International Junior Hockey League (KIJHL). “I feel like now I understand a little bit more and speaking it is easier with friends.”

Soft-spoken, Harju understands the textbooks he is studying better, which has led to an improvement in class.

“Still have things I need to concentrate on in English to make it more better,” he says. “It has been a very nice place and there is good teachers and they are good for me because I have a hard schedule to go there.”

While Harju came to learn English, he balances that time with the Chiefs’ 49-game schedule that includes practices. He receives a lot of support from teammates, to learn, and they help him with rides for games and practice.

Harju ranked 13th on the Chiefs in scoring as of Feb. 1 with five goals and 13 points in 35 games.

Harju feels he has had good and not great moments on the ice.

“As a whole, I am not very convinced about my own playing,” he says. “Points have [been] low. I’m still trying to improve and there is still time.”

He has adjusted to the physical style and is more physically fit in every situation. His skills have improved in games and during training.

“I have liked atmosphere in games, because more people came to watch hockey games here than in Finland,” he says “I also liked that I got lot of new experiences and have seen lot of different players, teams and places.”

It’s been a positive experience for Harju in Kelowna and the adjustment has been made easier living with his mother’s cousin, Minna Gruenke and her husband Aaron. It hasn’t been hard for Harju being away from home and his parents, and he hasn’t felt homesick. He is in touch with them almost daily, either texting or calling them.

Harju, who turned 18 on Nov. 24, says moving to a foreign country and living alone would have been difficult. Among the experiences he’s enjoyed is trying different food. He enjoys going to restaurants, his favourite being the Cactus Club as well as Kelowna Wings. Wings are Harju’s favourite food and he tries different flavours each time.

One of the cultural differences he has noticed between Finland and Canada, at least in Kelowna, is that people are more reliant on cars.

“People go everywhere with cars,” he says. “Way more cars than my town back home. Roads for walking and biking.”

Growing up in northern Finland, Oulu is the fourth largest in the country, and has more people walking and using bicycles.

When not studying or playing hockey, Harju enjoys hanging out with teammates and friends, skiing at Big White and golfing.

“It’s a very nice time for Big White because it’s a bigger mountain than back home,” he says. “I have been there two times in night skiing and I want to go sometime in day.”

Since Harju arrived in Kelowna last summer, he had the chance to enjoy the golf courses, beach and other outdoor activities.

He plans to return once his hockey season is over. With the Chiefs being one of the top teams in the KIJHL, a deep playoff run is a possibility. He will also have another chance to enjoy Kelowna’s summer before he returns home.

HodgePodge By Charlie Hodge – Our roommates are driving us crazy