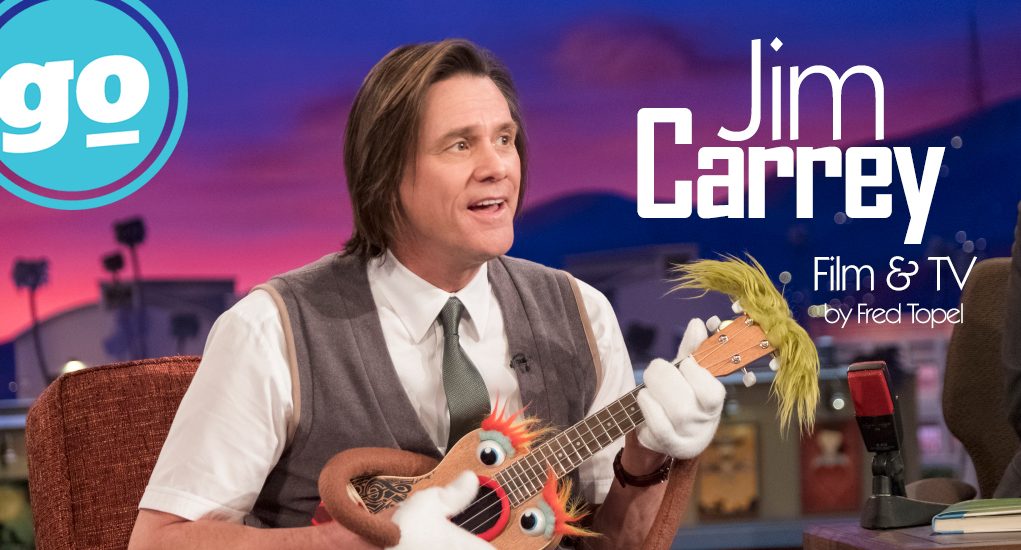 In the ‘90s, Jim Carrey leapt from the sketch comedy show In Living Color to movies like Ace Venture: Pet Detective and Dumb and Dumber. Then a few years ago, TV started getting good again. Carrey came back to produce the Showtime drama I’m Dying Up Here, and now he stars in their new series Kidding.

Kidding suits Carrey’s comedic abilities, as he plays the children’s television host Mr. Pickles. However, this is a cable series for grownups and Kidding asks Carrey to show Jeff Pickles’ true grief (his son died in an automobile accident).

Carrey spoke with the Television Critics Association about Kidding and Gonzo was there. When he’s not acting and producing, Carrey has also taken to painting caricatures of U.S. President Donald Trump. Kidding airs Sunday nights on Showtime.

Gonzo: Did you think about the Canadian children’s show Mr. Dressup when playing Mr. Pickles?

Jim Carrey: Mr. Dressup, oh yeah, sure. I had to have been affected by all that. That was my thing. Rusty, right? Casey and Finnegan. I had Captain Kangaroo in Canada. Mr. Dressup was a Torontonian thing, and he was on for, gosh, my whole life and The Jolly Green Giant. The Jolly Green Giant, there was a wonderful opening sequence where you come into the castle, and he does the whole puts the furniture out for you, and things are little, tiny, miniature. Those are the things I grew up with, and they were just wonderful. They were wonderful. But I quickly, kind of threw those out and started watching movies. Jimmy Stewart was always my favorite.

Gonzo: Was the hair your idea?

Jim Carrey: I wanted to make it as hard as possible for myself to look attractive to anyone on the earth. You want to change yourself when you get a part, man.  You want to do some things.  And he kept going, “No, no.  This is it.”  “But I should lose some weight. Right?”  “No, no.” I don’t feel crazy at all. I think it’s good. I think it’s  just, to me, it’s a juvenile kind of like a children’s hairdo.

Gonzo: What life lesson have you learned that’s important to you?

Jim Carrey: I just say keep moving. It’s the Dory explanation. Everything is happening to you for a reason. I believe you are being shaped. Whatever you’re being given, even if it’s terrifying, is something that if you look at it the right way and you become stronger because of it, there’s an ascension that happens in your understanding of people. After everything I’ve been through, I feel like I can sit down with mostly anybody, look them in the eye and say, “What is it? What did you go through though? Because here’s what I went through and guess what? It’s still love. It’s still good.”

Gonzo: Has Trump reacted to your cartoons?

Gonzo: How much time do you spend painting?

Jim Carrey: There’s no set anything. Sometimes I fall asleep with frigging paint all over the bed and sometimes I do it every once in a while. Mostly it depends on what I’m painting. This is what I’m painting right now so between this and the politics and whatever, I’ve got two television shows, I’m painting, I’ve got this part that I’m playing, this character. I’ve always got sculptures and paintings going on. They’re either made of bronze or they’re made of me.

Gonzo: Do you plan to do more of that artwork?

Jim Carrey: I don’t plan anything. That’s what I’m saying. It’s not a choice. It’s just happening because it’s my way, it’s my reflex to what I’m seeing, which I don’t like, and so it’s just a civilized way of dealing with it, I think, is to express it and to kind of get on board with as many other voices as possible that are shouting from the rooftops.

Gonzo: Have you gotten any feedback from the National Portrait Gallery?

Jim Carrey: I’ve gotten lots of feedback from a lot of people. I don’t know specific organizations or anything like that. It’s just a constant flow of people saying, “I appreciate it. It’s how I feel. So I’m glad somebody is illustrating it and kind of making a public record of it in a way.” It’s a new way to make a public record, you know. You can tweet all you want, but there’s something about a picture. There’s something about a creation, you know, that takes it to a whole other level and makes it something that’s fun to consume at the same time as it’s saying what I need it to say. But it’s not a choice. It’s, like, literally just happening, and I don’t know when it will stop, and I don’t know what it will turn into. I’m not a cartoonist.  I didn’t  that was not my field of study. It happened, and it’s wonderful that it’s happening. I wouldn’t put myself up there with some of the greatest cartoonists I’ve ever seen that do beautiful work. There are amazing artists out there that are being ignored and have fewer and fewer places to go. But it’s a great way to say something. It’s just happening, and thank God.  I’m so happy it is because it makes me feel like I’m ten years old again.

Gonzo: What do you think about people digging up old tweets like what happened to James Gunn?

Jim Carrey: We’re all under that now. Anything you say, I could say something right now that would go viral that would be insanely difficult to deal with. And yet I do it all the time. So when I see celebrities screw up and say something stupid, depending on the monumentalness of their stupidity, it is bound to happen. If you answer 1000 questions in a day, one of those things is going to come home, one of your answers is going to come home with you like a f***ing UFO and follow you around for the rest of the week.

Gonzo: Are you worried about that?

Jim Carrey: No. I’m not worried about anything.

Gonzo: What made you as daring to do things your way and were there people around going, “Hey, Jim, that’s a bit much”?

Jim Carrey: There’s always those people. But, yeah, being a comic and just the type of personality I am, a dinner for me, it’s a lovely time to spend with friends and family and whoever you are hanging out with, but there’s always a thing going on of, like, I have just seen the elephant in the room. I know what it is now. I know what’s in everybody’s mind this very moment, and I can either galvanize it in some sort of joke or some sort of line, I can make the toast that no one else is going to make, but it’s a bit like being a  like an Acapulco cliff diver. You have that moment and it’s presented to you, and you’re either going to say something or you aren’t.  And that moment invariably comes at least once a night for me where I go, “Nooooo!” like that, and does it go over or not, or are you over.  Basically that’s where I live.  It’s either people are really going to admire what I just said or I’m done.

Gonzo: When you were a little boy, was there somebody who brought you joy?

Jim Carrey: My father. My father was an amazing character, incredible character. So I’m always drawing on my father to play, especially a character like this. He was the kind of guy that if you talked to him for five minutes, you felt like you knew him for 50 years. I would watch him performing and holding court in the living room and be sitting back. This was before I even understood what a joke was, but I saw the connection. I saw the connection between my father and whoever was in the house, and they invariably always left holding their bellies and going, “Percy, you missed your calling. You missed your calling.” So it was his calling.