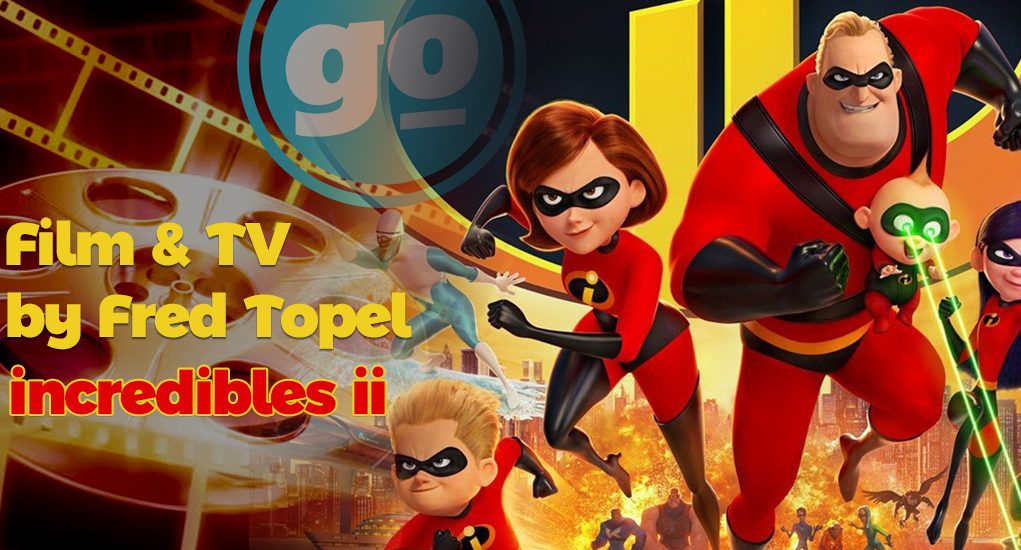 I still remember interviewing the creators of the first Incredibles movie. They were new to Pixar, certainly director Brad Bird was, but The Incredibles became one of Pixar’s most beloved films. So much so that fans have been clamoring for a sequel ever since.

G: How early did you have this idea for Incredibles II and how did it change over the years?

BB: Half this, 2/3 this. The idea of the role switch, that the assignment would go to Helen rather than Bob, I had when we were promoting the first film. And I also knew that I had the unexploded bomb of Jack Jack’s powers, that the audience knew that he had them but the Parrs did that. And I had other notions that I just wanted to see in an incredibles movie in some things like the raccoon fight, that were originally done of the first movie and there was no place for it. I loved the idea. The superhero part, the villain part, always seemed to change. When I came to Pixar and said I think I had the other part of the story figured out, the version that got greenlit, about four months since we got green lit, [producers] John [Walker]  and Nicole [Grindle] came one, we got a crew, we started spending money, then got a release date, and then the release date got moved up a year. Suddenly the pressure is huge and that plot doesn’t work. Now I’m screwed because I have a release date and everybody’s going “Incredibles II, Incredibles II, we’re working on Incredibles II, you know what you’re doing, right? You know what you’re doing, right, right?” And I’m like, “Yeah, I know what I’m doing.” “I hope you feel comfortable. Are you feeling comfortable? Because everyone has high expectations, okay?” I just realized it didn’t serve the story so the villain plot kept changing. It kept changing, everyone else had to adjust to it constantly which only made it more anxiety. But, I think that we wound up with the right version of this movie. It wasn’t until about a week ago that I was talking in one of these things and I realized that was also true of the first movie. I came with a different villain than we wound up with. In exploring an alternate opening when I came to Pixar, I introduced a villain that we killed off in the opening sequence and that was a better villain than the one we had. That was Syndrome. So the villain, for some reason, I don’t know why, comes last.

Q: What was the decision to pick up right where The Incredibles left off rather than having the kids grow up?

BB: I just thought it was kind of bold and weird because I think people take the time that passes very literally and they think that linearly, the characters should have aged. But if they age, their super powers don’t reflect the part of life that they’re in and their role in the family. I worked on the first eight seasons of The Simpsons and The Simpsons haven’t aged a day and they’re still on the air. That worked for them, why not?

Q: What did you think of the role reversal between Elastigirl and Mr. Incredible when you read the script?

HH: Well, I didn’t read a screenplay because there wasn’t really one. He’s the screenplay. He was my walking encyclopedia. He was my instruction manual. That’s him, that’s it right there. So it was a while before I truly realized what I was really going to get to do in the movie. I was really thrilled but it was like a retroactive thrill because over a period of months before I started gleefully singing during out recording sessions about how great my part was. To me, it was just really fun. I don’t think that this is a message movie in any way. I think it’s purely luck, luck of the draw that this happens to be dovetailing with MeToo and Time’s Up. But obviously time is up, okay? I feel that way personally and it happens to be serendipitously reflected in this particular movie. At the same time, it’s character revelation period. Everybody is having revelations, including Jack Jack. All of the characters are revelations to the audience and to themselves. I’m no exception as Elastigirl. In fact, I feel like in some ways Violet’s adolescent thing, her jag in this movie, there’s adolescence that I feel from Mr. Incredible and also from Elastigirl too.

CTN: I was resentful when I was told where Mr. Incredible was going to be in this film, not saving lives, not exhibiting any kind of strength. And then I find out that I’m going to be helping save the family. Bob’s going to learn how to be a dad and he’s going to learn about these kids and then the process started when we were recording. It was just so much fun. I mean, the stuff I did with Violet, the two of us together, Jack Jack and that whole discovery and Dash. Then having to deal with Elastigirl out there doing what I want to do, being able to give her the encouragement, let her know that everything’s okay. It was just a lot of fun. I’m so honored to be a part of it, to be doing this film.

Q: When Jack Jack watches TV, what was the thought to using Jonny Quest and Outer Limits on the screen?

BB: Well, one of my personal rules in an animated film is that if they’re watching something on TV, it should be animated. So the soundtrack of the old movie is an actual soundtrack from an old movie that we found that was perfect, and we animated to it. Jonny Quest is an animated show so it fit into the universe, and it’s the style of the film. it’s that kind of action-adventure style from the early ‘60s so it fits with our film. Outer Limits we only used the beginning of it because it’s still abstract. It’s still lines and things. It’s not visual photographs. that part fit really well with the Screenslaver thing because they’re talking about taking control of your TV. I just remember when I was a kid, that scared the crap out of me. The TV was being controlled by who, aliens? But I couldn’t leave the room and I would just be hiding from the TV because it’s being taken over. “We control the vertical. We control the horizontal.” And I’m like, “They control the horizontal!” I just had to put it in there. Also, I have to quickly say, I love Jonny Quest. So a lot of people don’t remember that it wasn’t made for Saturday morning. It was made for prime time. It came on at night and adults watched it and people died in it and it had everything an eight-year-old wants in entertainment. It has mummies, it has pterodactyls and guns and a kid from another country who can levitate things and a bodyguard who has a fling with a girl that might be dangerous, lasers and hydrofoils and jet packs and reptiles and robot spies. I just about exploded when I saw the opening titles to it. We just have to give Jonny Quest a shoutout. Had to.