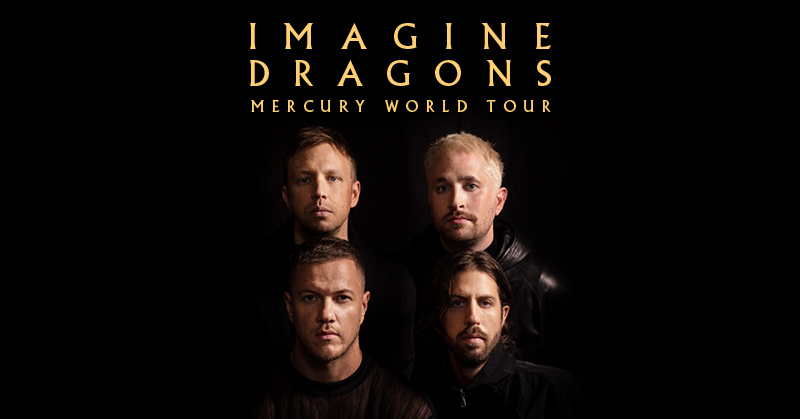 In celebration of the release of their latest album, Mercury – Act 1, Imagine Dragons announce their Mercury Tour.

Produced by Live Nation, the 2022 tour kicks off on Feb. 6 in Miami, making Canadian stops in Montreal (Feb. 16) and Vancouver (March 4), and wrapping up in Phoenix on March 14.

General tickets for new dates will be available starting on Dec. 17 at 10 a.m. local time at Ticketmaster.com.

Tickets for previously announced dates are on sale now at Ticketmaster.com

​​With 46 million albums and 55 million songs sold globally, as well as 74 billion combined streams, Imagine Dragons remains one of the best-selling rock bands, reinventing the genre with their enormous breakout success across the 2010s. Billboard’s Top 3 rock songs of the decade belonged to the band – “Believer,” “Thunder” and “Radioactive.”

Their highly anticipated fifth studio album Mercury – Act 1 was released on Sept. 3, 2021. Teaming up with esteemed producer Rick Rubin and with its title drawing inspiration from the word “mercurial,” Mercury – Act 1 is a candid album that abandons metaphorically charged lyrics and instead embraces emotional extremities, holding nothing back. It marks the band’s first album since 2018’s ORIGINS.

“Follow You” and “Cutthroat” were the first glimpses into the new record, released simultaneously in March 2021, with the former hitting No. 1 at alternative radio and Billboard’s Alternative Airplay chart, marking the band’s quickest ascent to the top of those charts. The album’s current single, “Wrecked,” is a confessional exploration of grief, written by lead vocalist Dan Reynolds after losing his sister-in-law to cancer in 2019.