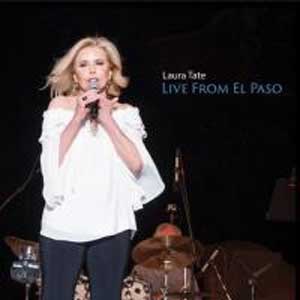 Live From El Paso is Ms. Tate’s 5th album overall, after 4 studio records- a live ‘best of’ if you like.  She’s a remarkable singer with a striking voice, pure tone and relaxed delivery as her band of top LA area musicians swing effortlessly behind her.  The end result is an uplifting, feel-good, artistically superior album.

Far from the venues in Nashville, New York and LA that she usually plays, Laura recorded this at McKelligan Canyon, a natural amphitheatre in the foothills of El Paso’s rugged mountains, under the stars of a West Texas sky.  The occasion was a benefit concert for the El Paso Foundation’s Laura Tate Fund for the arts, providing arts education for the under served.  Though recorded live there isn’t much in the way of crowd noise or energy exchange, which is just as well… with this kind of stuff, it’s nice to be able to focus on the music itself without a bunch of whistling and woo-hooing.

Live From El Paso continuously shifts gears throughout but not jarringly so, moving quite smoothly from jazz to rock to blues and even Americana.  Her take on the Thin Lizzy classic The Boys Are Back In Town, originally featured on 2017’s Let’s Just Be Real is a stunner, starting out with a slow jazz arrangement before it kicks into gear.  Other favorites from her back catalog take on fresh life here too as the album unfolds like a curated soundtrack for road trips, romantic nights and good times- the sort of thing to throw on when you find yourself really needing a positive lift.

No doubt Laura’s extensive theater experience is a factor in helping her interpret these songs so effectively, and her advocacy for education, the arts and justice for everyone caught the notice of The White House, resulting in receiving the President’s Volunteer Services Award from George W. and Obama.  So she does good work for the right reasons, but that’s not why you should add Live From El Paso to your music collection.  She’s a great singer, her band is suave and virtually faultless on this extremely well produced album, and the songs make you feel good- that’s why you need this record.

KEY CUTS:  The Boys Are Back In Town, I’ll Find Someone Who Will, Cowboy Jazz 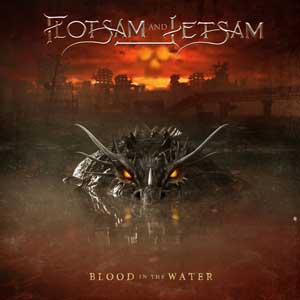 Fans of old school thrash metal are probably up on these guys. Blood In The Water is F & J’s 14th album, and it lives up to their legend and legacy.  Punishing drums power monolithic walls of guitar for maximum melodic violence.  To my ears it feels like Iron Maiden and maybe Judas Priest made a deal with Cannibal Corpse; a little intense for an old bastard like me, but not so far out there that I can’t get into it.

Arizona’s Flotsam And Jetsam came up around the same time as bands like Metallica, Megadeth and Venom, though they never achieved the same level of commercial success those groups did.  “Maybe our career path will run similar to Motorhead’s” guesses singer Eric Knutson. “Although (they were) always considered iconic, they didn’t really break through until later in their career.”  As Rush once observed lyrically ‘tough times demand tough talk’, and Blood In The Water takes the idea to heart. Guitarist Michael Gilberts observes that “with everything that’s happened in the world, the friends we lost this last year, and not being able to perform or tour…you hear all of that in our music.  It’s angry, it’s aggressive, and our emotions pour out all over this album.”

Very interesting to note that Ken Mary is behind the kit on this one as I’m familiar with his work with Alice Cooper, Accept and House Of Lords.  The other members of F&J not already mentioned are guitarist Steve Conley and bassist Bill Bodily.  Blood In The Water feels like listening to some of my favorite Megadeth albums- plenty of shifts in mood and tempo and while the music is hard and intense, it’s not often over the top.  The rhythm section of Ken Mary and Bill Bodily is quick-footed and precise, the guitars are thick, and Knutson is a hot shit metal singer who improves with every record and tour.

Though considered ‘legendary’ by their contemporaries and worshipped by a legion of fans, it feels like Flotsam And jetsam’s time for glory is at hand;  Blood On The Water is the record that will light the fuse.

KEY CUTS:  Blood In The Water, Walls, A Place To Die 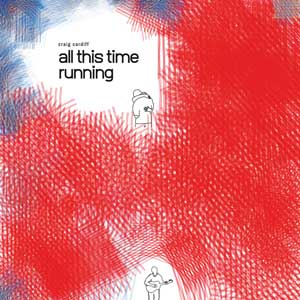 Few things untie the knots in your rope better than a good singer/ songwriter album. All This Time Running is Craig Cardiff’s first album of new songs in 6 years and his first for True North.  Knowing the label and its founder as well as I do and having just spent the evening listening to this, they’re a good fit.  The press calls this an “artistic triumph” and they’re right.  All This Time Running is the perfect album for when you’re thinking about stuff and trying to figure things out, as many of us have done over the last year or so.

While this new album isn’t about the pandemic, Craig is the first to admit the big pause imposed by Covid was actually beneficial to his process.  It gave him time to slow down, rethink, and take stock. “I never had time to pause like this before” says the busy singer. “It scared the hell out of me at first.  Everything went out the window; we had to re-jig and scramble.  It was like Mad Max, but it became a positive.  We were able to access some players we wouldn’t have been able to otherwise.  The time to sit with the songs and the recordings- that was critical.”

Cardiff’s warmly weathered voice is like shooting the breeze with a good friend, not unlike Ellis Paul or Josh Ritter.  As a songwriter, he was inspired at a young age by Bob Dylan, Paul Simon and Elvis Costello.  The songs themselves give you the same feeling as looking at a favorite painting; it makes you feel real good, a similar effect to Barney Bentall’s semi-recent records like The Drifter & The Preacher.  A storyteller at heart, Cardiff chronicles the human condition and all its joys and tragedies, inspired by real people, places, lives and journeys.  All This Time Running is a gentle but insistent reminder of what we’re all missing and an antidote to this year-long bout of cabin fever we’ve all shared, a fast-paced travelogue for the housebound.

Like most performers, Craig Cardiff misses sharing his songs in a live setting.  “I need to know I’m singing to somebody who connects with my songs” he says. “The goal is to take a roomful of strangers and bring them together.”  While it may be some time yet before we can gather together in a venue and commune with Cardiff in this way, listening to All This Time Running and maybe sharing it with family and friends will feel great.

KEY CUTS:  The American, Greyhound SK, All This Time Running 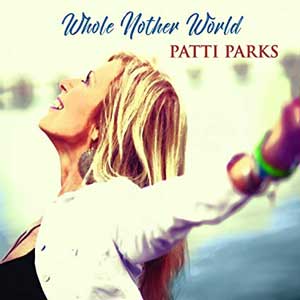 A riveting blast of blues here from this soulful belter.  Winner of Western New York’s Night Life Magazine Blues Awards as Best Female Vocalist for her debut album (Cheat’n Man) in 2013, Whole Nother World  shows every intention of setting the blues world on fire, and you know what?  It very well might.

Legendary bluesman Kenny Neal was so impressed after hearing Patti at The International Blues Challenge that signed her to his Booga Music label. He brought her down to his studio in Baton Rouge where he produced and arranged Whole Nother World, singing a duet with Patti on the sparse, sultry and riveting Baby Bee, providing harp and guitar here and there on other tunes too.  The whole record is a blues adventure, a tad short at just 8 numbers, but when Patti opens her mouth to sing in that soulful, sensual, urgent way, she owns the room.  There’s a swampy vibe and groove to many of these tunes as she rocks out, but when she brings it down for a ballad like Don’t Play Me Cheap, you really feel it.

Even outside of the music, Ms. Parks has an interesting story to tell. Aside from being a hot blues performer Patti is also a working nurse, and the creator of the “Nurs’ N Blues” education program, developed to help high risk children at drug rehab centers.  In addition to her regular gigs, she can be found performing at charity events throughout Western New York.   Where she finds the time to sing God only knows, we’re just lucky that she does.  The band behind her on these tracks, Kenny Neal included, groove like they were born to do it which makes Whole Nother World satisfying on so many levels. The swing on I’m Trouble, the opening cut, is a total blast.

Patti Parks has a lot going on in her corner of the world, in Western New York, and if I read the PR sheet I got with her CD correctly, that means she sticks fairly close to home.  Having said that, though, Whole Nother World is so delicious and totally bad-ass that it should be heard around the world.  I’ll be only too happy to play these songs on my radio show for www.uniteddj.com- you really need to hear what she can do. 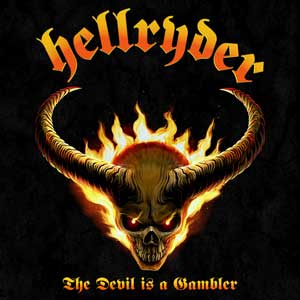 THE DEVIL IS A GAMBLER Hellryder (Rock Of Angels Records) *** ½

This is where traditional heavy metal and black metal collide.  Hellryder is the brainchild of Grave Digger’s Chris Boltendahl (vocals) and guitarist Alex Ritt.  It’s heavy, it’s relentless- it’s what Chris and Alex call “dirty kick-ass heavy metal.”  The Devil is A Gambler, it’s safe to say, is maximum heaviosity.

Extreme metal is not really my thing, so Boltendahl’s nearly Cookie Monster vocals threw me off at first. It took a couple of tunes to get into it and once I did, it was time to key in on those brawny riffs and whipsaw solos being thrown down by Ritt over the punishing rhythm section of Steve Wussow (bass) and Timmi Breidebande (drums).  An apt comparison would be listening to Motorhead for the first time, where the intensity punches you right in the face, but if you can hang on and settle in it’s worth the effort.

Like so many other records I’ve reviewed in recent months, The Devil Is A Gambler has its roots in the pandemic.  With Grave Digger’s activities at a standstill, Chris and Alex took advantage of the downtime to create Hellryder.  The first songs were recorded last September, and by November with Steve and Timmi on board this became a band, a German super-group with the brass to take on all comers.  Much like their fellow countrymen in Accept, this band’s sound hinges firmly on the guitar- in this case, the six string acrobatics of Alex Ritt.  The fast double kick drumming, particularly with Ritt’s riffs, reminds me of Scott Travis/ Tim “Ripper” Owens-era Judas Priest.

Once upon a time I scoffed at extreme metal and found it unlistenable, but after giving The Devil Is A Gambler a couple of spins I’m intrigued at the prospect of discovering what I’ve been missing.  Traditional heavy metal with extreme or black overtones is the right way to sum up this disc from Hellryder.  I’ll pop this into the car stereo for my next trip to do some record shopping in Edmonton and have it turned up to ear splitting levels- provided the missus isn’t with me, of course.

KEY CUTS:  The Devil Is A Gambler, I Die For You, Passion Maker