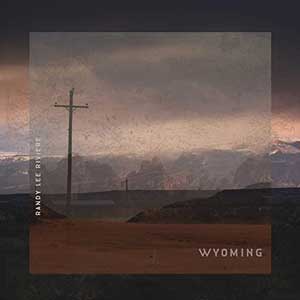 A brilliant and thoughtful new album here from northern California’s Randy Lee Riviere.  Wyoming falls under the label ‘Americana’ with its rootsy blend of rock, folk and country.  Lyrically it’s a cry in the wilderness aimed at monolithic corporations that continue to exploit the land and overrun small towns in the name of profit.  It is a stirring, emotional and satisfying experience all around.

“I think a lot of folks are looking ahead for what they left behind” Randy said in an interview with American Songwriter.  “We lose sight of how important various aspects of our past really are to us, how strongly they chiselled us into who we are; our teachers, friends, families, pastors, coaches… our towns.”  In that spirit Wyoming reminds me of John Mellencamp’s Scarecrow record, but musically this is a cross between Murray McLauchlan and Crazy Horse.  “My concern for the fate of the land is paramount in my life” he says. “Seeing so much of the West swallowed up by humanity and developer greed is always at the forefront of my mind.”

I am always suspicious of ‘music for a good cause’ but Wyoming isn’t a charity record, it’s just an album with a good heart.  The music catches the ear and Riviere’s lyrics, more pointed than most, give us plenty to think about.  Part of the soul of this album is it’s seemingly rough hewn yet never sloppy sound, surely due in part to producer Kevin McKendree working out of Franklin Tennessee.  “I was initially drawn to this because of Randy’s lyrics” Kevin notes. “He cares deeply about our environment, his family, Native American culture and the beauty of the Western land.  His lyrics illustrate those things in a very moving and poetic way.”

Giving Wyoming a spin is not unlike listening to a Band album; not quite country, rock or folk, yet somehow all of those things at once.  Our Town (the first single) is aimed directly at the propensity of developers to change the historical character of everything, and Red Rain speaks through the life of a young man who learns how to become a man, finds his love, looks after his people, and is forced to confront the onslaught of invaders from far away places.  All of the songs are on that emotional level, even the title track- an instrumental- that closes out the album.  This is an outstanding piece of work. 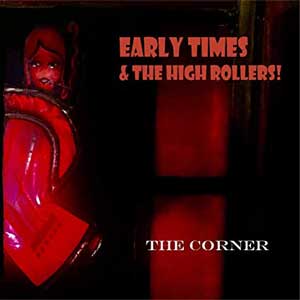 Early Times is a Blues Rock street poet and his new album, The Corner, is a compelling collection of songs populated with characters from the Eastside street corners and the project park.  Early and his High Rollers create atmospheres and moods so thick it’s like running in mud as we get to know and, in some cases, love these people.

Early Times is a popular DJ on Sirius XM’s Bluesville (one of my favourite channels) and The Corner is a gritty urban landscape.  The first single is the grinding blues number She’s About To Lose Her Mind.  It features Popa Chubby on guitar and is fairly indicative of what to expect from the rest of the album.  The disc is blues from the other side of the tracks, the kind of music your folks don’t want you to get involved with but dammit, you just can’t help yourself.

The High Rollers sense of groove is captivating and they’re highly skilled at finding the pocket and settling in for the ride, a cross between Curtis Mayfield and Jimmie Vaughan while Early Times as a singer is reminiscent of David Gogo.  They even explore a Latin beat on Say, Man, a song I could see Santana doing too.  Early’s guitar playing is muscular and expressive, likely to prompt you to close your eyes, lean back let rip with some most excellent air guitar yourself.  The Corner is a collection of songs about people like Little Hustler, Uptown Charlie, Tijuana Madonna, funky old Mabel and Mary with her cha-cha hat, a bunch of stories well told.  It would be an interesting bunch to know.

The Corner is rock powered blues with a healthy dose of funk and expert but not fussy musicianship, a brawny mixture that I find quite enjoyable.  Not vulgar but not particularly well mannered either, it could well end up being one of my favourite records of the year- yours too. 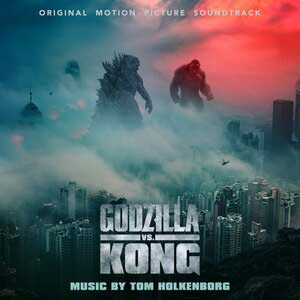 Here is the soundtrack to a movie I’ve been looking forward to ever since it was announced.  The film was released March 31st, and I bought this on I Tunes that afternoon before catching the 7pm showing at the May Theatre in Lloydminster. Godzilla Vs. Kong was everything I hoped it would be, and the dramatic music by Tom Holkenborg is essential to every scene.  While other songs appear throughout the film, this soundtrack consists solely of Holkenborg’s score.

Soundtracks are usually the modern equivalent of K-Tel albums, so it’s a real treat to sit down with something like this.  I’m certainly no stranger to such music, owning several Star Wars albums, Kong: Skull Island and even the s/t for Kubrick’s 2001: A Space Odyssey helping fill out a proud section of my soundtrack collection.  I enjoy how the music adds to the emotional content of the  scenes without  a word… from something quiet and personal, to dramatic tension, to climactic battle scenes- for example. And monster movie music is a beast unto itself, if you’ll pardon the pun.

Godzilla Vs. Kong was directed by Adam Wingard and, according to an article on Wikipedia, when he met Holkenborg in 2018 Tom admitted to “recreationally writing music for Godzilla for years prior due to being a fan.”  When it comes to this stuff, having seen the movie helps you put each piece in context as it comes along.  I’ve only seen GvK once as of this writing, but hope to catch it at least a couple more times on the big screen before it leaves town.  I’ll buy the DVD the second it becomes available.

I grew up on the old monster movies, watching them Saturday afternoons in the 70’s on the Q-6 Creature Feature on a TV station out of Spokane.  I remember how the music contributed greatly to the atmosphere and feel of those old black & white flicks,  plenty of them from Toho’s Godzilla franchise. I had that impression again as I sat in the darkened theatre watching the action unfold, that this was key to the movie’s mojo. I enjoyed it so much I returned to I Tunes and purchased Akira Ikufube’s score for 1962’s King Kong Vs. Godzilla as well as a collection of sound effects from Toho- how nerdy is that?  Oh yeah… in the new flick Tokyo takes another shit-kicking.

Most people appreciate the soundtrack as they watch any given movie and, unless it’s a catchy pop or rock song, they leave that affection behind when they exit the theatre.  Then there are some that can appreciate the music after having seen the film.  When it comes to Godzilla Vs. Kong I like having it both ways.  How about you? 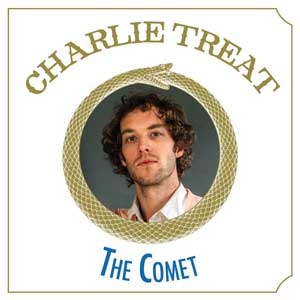 The latest from Charlie Treat is a mix of American roots music with left field pop flourishes, gospel harmonies and barroom rock & roll.  The Comet is the sort of record that gets to you right away; I haven’t been this taken with an artist and album since Stephen King recommended Josh Ritter’s The Animal Years to me a decade or so ago.

Charlie Treat is the kind of artist with some interesting mileage, and that really shines through on The Comet.  Raised on a farm in New England he grew up on blue collar music- Delta blues, classic country, work songs and, of course, Dylan- before grabbing his acoustic guitar, jumping into his ’88 Oldsmobile Cutlass and busking his way across the country.  He eventually ended up in Nashville, recording a self titled EP in 2018 with producer Jesse Thompson, then taking his band and gigging all over town.

The Comet is a mix of different styles with Americana as its baseline.  So many genres colliding in the space of a single album can come across as a hot, unfocused mess, but the opposite is true here.  These songs, with Treat’s poetic lyrics painting vivid pictures of wild nights, rocky relationships, the uneasy relationship between people and technology and strange truths, sound and feel like… life.  As a singer he has an occasional Eddie Vedder-ersque warble in his voice and the tunes hit you as raw, honest snapshots of a gloriously well lived existence.

This album careens from folk tinged ballads to the home-wrecking rock & roll of songs like Rain Again and touches on everything in between.  The Comet holds your interest by not staying in any one place for too long, a record that is proudly eclectic and weird, and hard not to love.  It’s a disc that reflects the wide range of music that’s been coming out of Nashville in the last couple decades (hey, Deep Purple and Megadeth record there too), far more than just country.  The Comet is entertaining and engrossing. 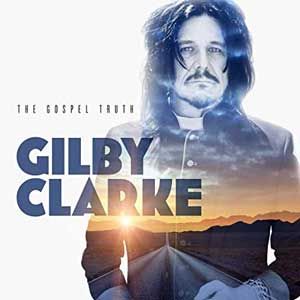 Glorious dirt bag rock & roll; what else would you expect from a guy that’s played guitar for The MC5 and Guns ‘N’ Roses?  The Gospel Truth, due out April 23rd, is Gilby Clarke’s latest solo release and it’s one of the coolest rock records in recent memory.  It’s big, meaty riffs and guitar solos dripping with attitude that make the hair stand up on the back of your neck to make TGT unforgettable.

I knew something special was coming when Clarke started releasing singles last year, each being even better than the one before; Rock & Roll Is Getting Louder, Tightwad and the title track.  The Gospel Truth is high test fist-pumping rock & roll powered by bluesy licks and big, fat choruses… the kind of thing that should be blasting from car windows everywhere this summer.  It’s not overly complicated stuff but then neither is AC/DC and they make a decent living.  As a singer Gilby is no Robert Plant or Paul Rodgers, but he doesn’t need to be.  His vocals are solid and packed with just the right rock attitude to make these songs really work.

If you look past Gilby Clarke on this disc you’ll also find Motley Crue bassist Nikki Sixx and drummer Kenny Aronoff, who’s played with everyone from Mellencamp to Melissa Etheridge, John Fogerty and Tony Iommi.  The Gospel Truth has plenty of rock & roll credibility as far as the musicians go, and they play like they’ve been doing this together for years.  Attitude-wise it’s like the Crue meets early Aerosmith meets Ace Frehley’s 80’s solo stuff with a primal appeal that will have you cranking it up to 11.

Not a lot of pithy or witty things to say about Gilby Clarke’s The Gospel Truth… this is just straight up great rock and fuckin’ roll, and you really need this in your life.