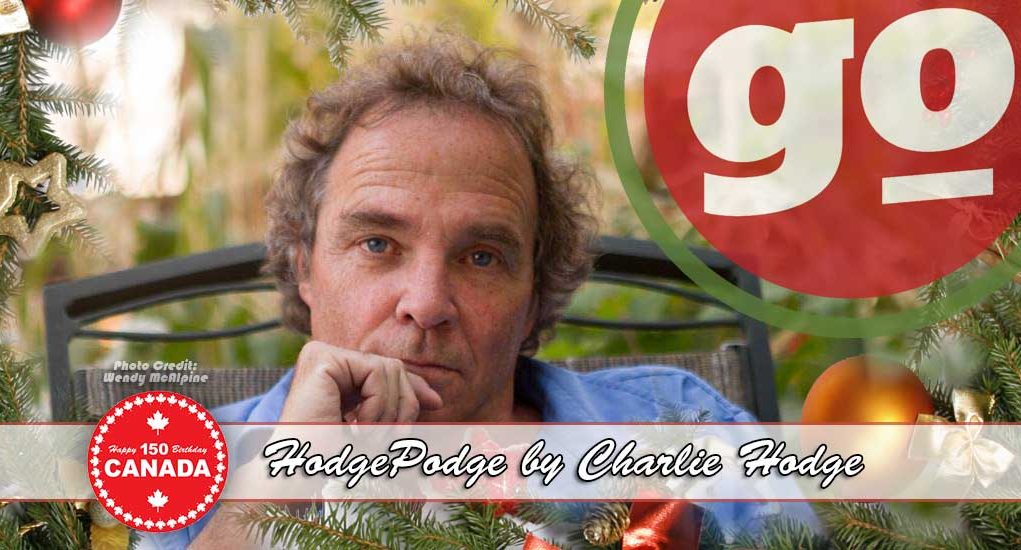 At 62 years of age one would think the joyful sensations of the holiday season would have paled a bit by now, yet I gleefully admit I am looking forward to this Christmas more than any I can recall.

Certainly that has a lot to do with my rediscovered appreciation for life since my return from hospital, however it is also the simple fact that I fully appreciate how blessed and lucky I am. Not only do I live in one of the finest cities in one of the finest countries in the world, I am likewise surrounded by a plethora of amazing friends.

That said it is a few total strangers who made a brief appearance in my world this past week that have set the festive tone. Following last week’s column (lamenting my dependence on purees food for the next few months) three total strangers took the time and energy to send me get well cards including two who arrived at my house with homemade soup. It has been a truly humbling experience.

In a world that too often seems insensitive, greedy and overcome with negativity it’s a wonderful reminder that kindness and caring still exists and sometimes arrives from the least expected or unknown sources.

All of which is a perfect segue reminder to readers to send me your submissions as soon as possible for my annual Charlie’s Christmas Angels List.

The criteria is simple. All your angel has to have done is something nice, from a needed smile at the right moment to saving your life or helping someone else.

Please take a few minutes and jot down the name(s) of people you consider angels in your life with a brief reason why they deserve the recognition. Send your list to charliehodge333@gmail.com and I will run them in an upcoming Hodge Podge prior to Christmas.

A last minute reminder of two worthy fundraising/awareness events this weekend. The gala event A Christmas Spectrum – A Journey of Awareness involving music, dance and a silent auction promises to be an enchaining night raising awareness about Autism. The fun is set for the Kelowna Community Theatre starting at 7 p.m. For tickets call 250-762-5050 or visit the website at www.achristmasspectrum.com

Meanwhile also on Sunday, Dec.3 music icon Jimmy LeGuilloux will kick off his 24th annual Rock for Kids hosted by Power 104 at Wiskey Jacks in West Kelowna. One of the music highlight events for me Rock for Kids is a great cause worthy of your support.

A couple of hockey fans complained my annual (foolish) Hodge Podge Clip and Laugh NHL Hockey Predictions have not been posted. A silly tradition repeated ridiculously for some 20 years this amusing little game is simple to play. You cut this page out, stick onto your fridge with some sort of tacky magnet, and then throughout the season occasionally glance at it and chuckle at my complete lack of knowledge of the game. For some reason I and others find this amusing.

Barring injuries this will be the year for a couple clubs including Tampa Bay Lightning, St. Louis Blues, Dallas Stars (once they get their act together) and … my beloved Toronto Maple Leafs.

Despite a slow star Connor McDavid will be in the thick of competition for the overall scoring title with Steve Stamkos, Vladimir  Tarasenko, Nikita Kucherov, Austin Mathews, and Jamie Benn. Likewise watch for a huge year for others such as, Ben Bishop, Tyler Seguin, Jordan Eberle, Jonathan Drouin and Jaden Schwartz.

Regular season final results will see teams finish like this:

Anaheim struggles from injuries, age hurts San Jose, Edmonton finally trades Nugent-Hopkins but it is too late to salvage season.

Winnipeg, Dallas and St, Louis will have very solid seasons. Crawford will play hurt a lot this year with the Hawks feeling the pressure from injuries and fatigue going into the tank.

Tampa Bay and Toronto will battle for the Eastern  Conference title. St. Louis will eliminate a late rallying Edmonton in the West.

Tampa will beat out St. Louis for the Stanley Cup in six games

Okay, now post this on the fridge and have fun.

By the way – real sporting sorts post their own predictions next to this one.