The track has been cleared. My first childhood hero has died. 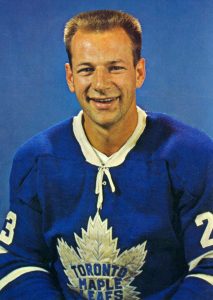 One of pro sports all time ‘larger than life’ characters Eddie Shack, died Saturday in Toronto from cancer. He was 83. His quiet, private departure ironic for an athlete known for his blustery, chaotic, flamboyant nature.

Few athletes ever reach the level of fan appreciation, adoration or at least attention than Shack accumulated over his 17 years skating in the National Hockey League. Love him or hate him (and few really did hate him) everyone knew when Shack was on the ice or in the arena. He made it impossible not to notice him.

Known by many nicknames such as ‘Eddie the Entertainer’, The Clown Prince of Hockey’, or ‘Clear the Track – its Eddie Shack’, it’s hard to say if the hulking (6’1″ 205 pounds) left winger was best known for his bizarre antics on the ice or his product marketing off. 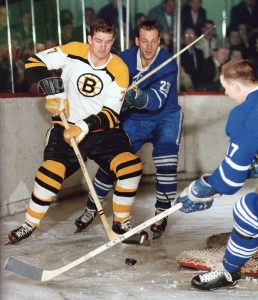 On ice he was a talented player often underappreciated for his skill level. Perhaps that was because his rambunctious, unpredictable, bull-in-a-china-shop style of play garnered more notice. He drove coaches and teammates crazy yet effectively agitated and rattled opposition players even more.

Eddie was adept at scoring, passing, skating and hitting tallying scored 239 goals and 465 points between his rookie season in 1958-59 and 1974-75. The Sudbury native played on six different teams, reaching 20-goal seasons nine times. He won four Stanley Cups – scoring the Cup-winning goal for Toronto in 1963. He also played in three all-star games

Eddie was pure pandemonium on skates, just as happy to run you over or go through you rather than around. He loved to fight. During his 1,047-games he sat in the penalty box for 1,431 career penalty minutes.

Scoring, skating, fighting… no matter what he was doing it was always accompanied by loud laughter or over the top animated actions. 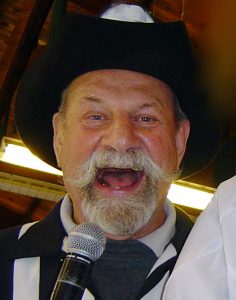 Off ice Eddie was famous for many TV commercials. Sporting his giant cowboy hat, huge moustache and gigantic beak of a nose Eddie commercials were always a stop and listen scenario.

As a young lad I dreamed of one day becoming a Toronto Maple Leaf. My two heroes were Shack and Davey Keon, however it was Eddie who helped create my first hockey hero memory.

It was a smoldering summer day and I was 11 years old. Dad had promised to take me for a burger at Sings Cafe, however as a City Council member he had to attend an event first. Back in the mid 60’s the Bank of Montreal owned a mansion house called Hochelega and annually held a huge fancy tea party. That same weekend a Hockey Spectacular event was held in town with NHL stars playing with local stars in a fun fund-raiser event. Eddie was among them.

Eddie wound up at the garden party and chatted a bit with Dad. Shack was a plain, simple, country-boy not comfortable in fancy settings. He’d quit school early to work and play hockey and had not learned to read or write. He liked crowds when he had skates on – but otherwise he felt like a fish out of water.

Dad saw his chance, told Eddie what a fan I was, and convinced him to join us for a burger in a more comfortable location. (I’m sure a cold beer was part of the bribe). I was flabbergasted when Dad honked the horn to get me and there in the front seat was…Him!

That lunch is largely a blur know but for an hour I asked him a gazillion questions and stared at him as he guffawed and laughed and told story after story. He had the largest hands I have ever seen. When we shook hands goodbye my hand literally disappeared.

Eddie crossed my path a few times over the years but it was a memory of Howie Meeker’s about Shack which I often recall. While writing Meeker’s biography Howie gave me a letter which he wrote to Leaf owner Conn Smythe. On April 4, 1957 Meeker was scouting junior players and attended a game between St. Kitts and Guelph – which Guelph won 6-2. Two particular players stood out. I quote from the letter, “Bobby Hull was the outstanding player for St. Kitts. He is a strong skater, has an excellent shot, a good competitor and seems to have better than average hockey brains. I think he is a good NHL prospect.

“Sweeney scored three goals for Guelph but (Eddie) Shack created most of the openings. He played a much tougher game at home than on the road.”

The Leafs pursued Shack and though it took a few years, eventually traded for him. He was a Leaf for nine seasons.

In 1967 the Leafs traded Shack to the bottom feeding Boston Bruins. I was so disgusted with Smythe, Harold Ballard and other Leaf management sorts that I literally tore down my Leaf pennant and switched loyalties to Boston. Thankfully a young fellow named Bobby Orr arrived on the scene making my new team palatable to watch.

I met Shack a few other times over the years but I always recall with a grin my lunch with my hero. 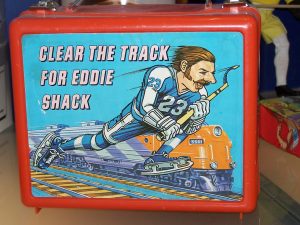 His final words to me that day were, “Be good to your parents, stay in school and never let anyone tell you that you can’t do something. If you want something – chase it. Never quit.”

Though it seems bizarre to say to such a full steam ahead fellow – rest in peace Eddie.

Embracing a new year, a new lifestyle with creativity and relaxation

An ode to a bah humbug

The Frequency of Jodie B.