Home Lori Welbourne On A Brighter Note – The hitchhiker’s guide to safety by Lori... 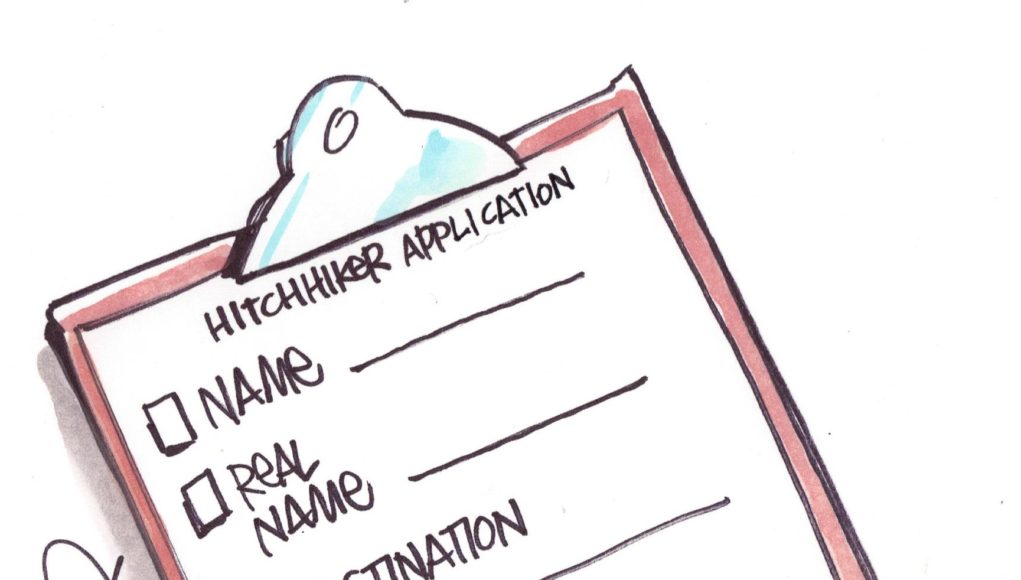 My parents taught me to never hitch a ride and never pick up hitchhikers, but after becoming a cabbie in North Vancouver at the age of 18 and picking up hundreds of people I’d never met, I became almost fearless about strangers.

I never hitchhiked myself, but long after I stopped driving a taxi I’d frequently pick folks up if they needed a ride. Even after becoming a mother I’d do it if I didn’t have the children with me, never thinking anything bad would happen. Fortunately nothing ever did.

Two years ago I snapped out of my misguided level of comfort when an aggressive man I didn’t know suddenly tried pushing open the door of my hotel room as I was closing it in Las Vegas. Even though he was pushing hard and I could feel myself starting to panic in the struggle, I was somehow able to shut it and alert hotel security who then called the police. From video surveillance they determined he was not a guest at the hotel and had followed me in from outside.

I felt a healthy dose of stranger danger after that.

Last year a young man approached me at 10:55 pm in a nearly empty parking lot of a grocery store in West Kelowna to ask for a ride to another store nearby. I looked at the bike he’d wheeled up and asked why he didn’t ride there.

“Why are you trying to go that store?” I asked suspiciously, knowing it would be closed.

“I can walk my bike home from there,” he said.

After finding out he was only 17 and lived quite a distance from that location, I asked him why he didn’t call his parents.

“They’ve been drinking,” he said. “I’m having a bad night.”  And then he started to cry. He seemed like a nice kid who needed my help, but I wasn’t entirely convinced.

“I’ll drive you home if you let me take your picture and send it to my husband first,” I said. “That way if anything happens to me the police will know who to look for.”

“Of course,” he said, grateful I’d be giving him a ride.

After sending Paul his picture, name and the address he’d given me, I loaded his bike into the truck and drove him home. When I dropped him off in his driveway 10 minutes later he thanked me profusely and tried to give me money, which of course I wouldn’t take.

If I could replay that experience I would have texted a picture of my plate and drivers licence to his parents so he could feel more secure and know that if he’s ever needing a ride from a stranger again, he’d feel comfortable offering and making a request for I.D. exchange himself.

I have no experience hitching rides, but I personally know several people who frequently travel this way, so in an effort to offer some additional suggestions, I looked up ride sharing safety on the internet.

There were loads of helpful tips, but here are some of the top ones: don’t do it alone; wear bright clothing and stand on a safe part of the road as far back from the traveled portion as you can; if possible, choose your driver by arranging it online ahead of time or asking for rides at gas stations rather than at the side of the road; talk to the driver before getting in to establish where it is you’re wanting to go and where they’d be able to drop you off; trust your instincts and refuse rides from impaired people or anyone who gives you a bad vibe; understand that getting a ride at night is riskier; stay alert; note the make, model, colour, and licence plate of the vehicle, and vocalize this information as well as your destination and estimated time of arrival over the phone with someone so the driver feels under surveillance.

If during the trip you feel uncomfortable and want to get out, tell them you’ve changed your plans or you’re feeling car-sick and ask to be dropped off in a safe location of your choosing.

For more suggestions of ride sharing safety for both passengers and drivers go to HitchWiki.org or google search for additional tips. In some parts of the world hitchhiking is encouraged, in others it’s not even legal. That information is important to know as well. In most areas of North America it is.

Like my parents, I’m teaching my kids not to pick up or accept rides from strangers whenever possible, but to instead take a bus or call someone they know and trust. Most people aren’t dangerous, but some are. Why take a chance if you don’t have to?