Home Go! Food History was made in Summerland this Month 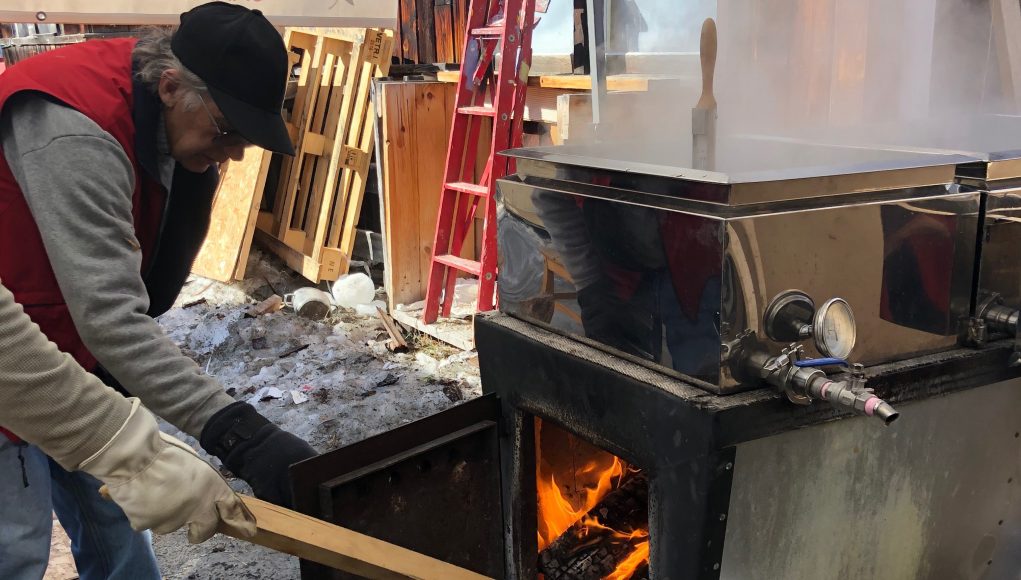 History was made in Summerland this Month

For 100 years, local sugar maple trees have been carrying that magic sap.

A little bit of sweet history was made in Summerland on Saturday, March 16.

Retired RCMP officer Roch Fortin has partnered with maple farmers in New Brunswick to bring the Okanagan pure maple syrup. But this is the first time, he’s been able to tap local trees and produce the golden syrup.

“It’s pretty exciting to find out what Summerland maple syrup tastes like,” said Fortin while boiling the syrup behind his store on Saturday.

There isn’t anything more Canadian than maple syrup. Our national flag even has a maple leaf on it.

More than 90 per cent of the world’s maple syrup comes from eastern Canada, mainly Quebec. But it was always believed the Okanagan wouldn’t have the right maple trees to make the delicious syrup.

That was until Roch Fortin decided to look around. He put a call out to his community, asking for people to look on their property for sugar maple trees – the ideal syrup producing trees. The majority of maples in B.C. are red maples which don’t produce the magical sap.

But it turned out there are a fair amount of sugar maples in Summerland.

“We tapped about 70 trees around Summerland this past week,” said Fortin. “We believe the settlers who put in the railway planted the maples some 100 years ago.”

The majority of sugar maples were found on Nomad Cidery’s property. The owners were happy to be part of the community project and even created a maple bourbon cider using Maple Roch’s maple syrup.

Other trees were found at the Apple Barn, behind Summergate Winery and at the Summerland Campground. But before Fortin could tap the trees of their sweet nectar, he had to wait for ideal weather conditions of -4 at night and +4 during the day. That’s when the sap really starts to flow, he said. It’s a very small window to tap trees.

But just like anything worth the effort, making maple syrup is a labour of love.

“From 50 gallons of sap collected, we will only get around two gallons of syrup. The rest becomes steam in the boiling process. This is not a business venture but more of a community event,” said Fortin.

More than a 100 people came and went from Maple Roch to see how maple syrup is made. Fortin offered tastes of the sap tapped from the trees that morning.

The sap has the look and taste of water but with a subtle taste of maple.

The clear-coloured sap was boiled in a traditional fire-fed boiler, slowly turning the colour of sap to a rich amber brown colour.

The process takes hours as the syrup has to reach an optimum amount of bricks and boiling temperature. Along the way, he provided tiny testers of the Summerland syrup. The sweet butterscotch flavour seemed ideal for waffles.

Then at just around 3:45 p.m. on Saturday, the maple syrup was ready and the first bottle capped.

Maple Roch continues to make partnerships with other local businesses who infuse the maple syrup into their products, like Lang vineyards famous maple wines.

Stay tuned for the next boil day of Summerland syrup. Maple Roch Pure Canadian Maple Syrup is located at 13224 Victoria Road and is a regular at the famous Penticton Farmer’s Market. Check out their social media accounts.