Home Lori Welbourne Head over heels – latest column and cartoon from On a Brighter... 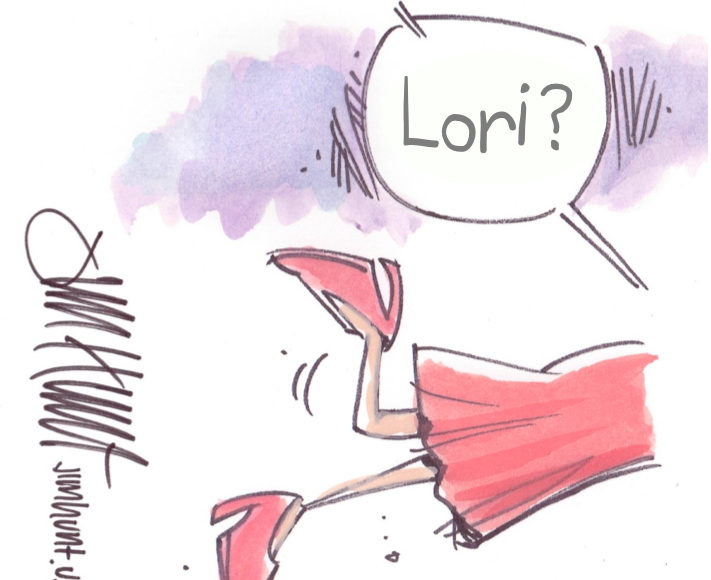 On Saturday night my friend and I attended an event at the Delta Grand Okanagan Hotel honouring the former mayor of Kelowna, Walter Gray, and two longtime councillors, Robert Hobson and Andre Blanleil. I pulled my car up to the building, grumbled there was no valet parking and headed to its parkade.

When I approached the entrance my pal, Jennifer Long, told me to stop the car and jumped out to buy a pass from the machine. As she did I answered a couple of texts on my phone. A few minutes later I thought I heard a feeble “Lori?” coming from outside the car.

Looking back I could see my beautiful friend in her elegant dress and five inch heels bending over as if she were picking up something from the ground while a car waited for her to move. I was about to get out to help, but suddenly she’d hobbled up to the passenger door, slid onto the seat in an awkward position and held her face up in the air with her hands.

“I think I broke my nose,” she said as blood poured out of it. “And my teeth.”

With her chin held high to keep the blood from getting on her dress she pulled the visor down and inspected her reflection in the mirror.

I was already fumbling around my husband’s car looking for napkins or tissue. “What in the hell happened to you?” I asked, reaching for the only thing I could find – a grubby wash rag. Oddly I felt my initial concern transitioning into a suppression of laughter.

“You didn’t see any of that?” she asked in shock. “Nothing? I just had the most embarrassing moment of my life and you missed the entire thing?”

“I was texting,” I said, trying to sound serious and remain stony-faced. “I thought you were just picking up coins or something.”

“Coins?” she asked, her eyes penetrating mine. “You thought I was picking up coins?”

“Yes,” I said, doing everything in my power to kill the unintentional smile I felt sprouting on my face. I asked her if she wanted me to take her to the hospital, but before I could finish the question my voice got high and started to crack. The laugh I’d been trying to stifle escaped – and it didn’t just erupt out of me, but out of her too.

As she entertainingly explained how her heel got caught in a hole in the cement and she suddenly found herself falling forward, she said she conducted a full on debate inside her head as she tumbled.

“I’m OK,” she had thought to herself. “No, I think I’m falling. No, I couldn’t be. Now I’m on my knees? Now I’m falling further? Weird. Guess I’m really falling. What the hell? My nose just fully crashed into the pavement. And it was so loud! But I’m still alive?”

After trying to break the fall with her arms she motioned towards me and whimpered my name.

“Huh?” her thoughts continued. “How am I going to get into that car from here?”

By now we were laughing so hard we were actually crying as she continued to wipe away the blood with the dirty cloth while noticing the big runs in her nylons and her bloody knees.

“Maybe we should go to the hospital?” I repeated, as I looked at the road rash on her nose and forehead.

As we walked to the hotel we marvelled at how she could go from an upright walking position one moment, to landing directly on her face with the full force of her body weight seconds later.

“I’m always left wondering what my most embarrassing moment is whenever that subject comes up,” she said. “Now I’ve got a story to tell.”

Fortunately she appears to be all right and the fall that should have broken her nose did not. It didn’t ruin her evening either, and unless we told people what happened, no one knew.

Hopefully the hotel has some video footage they can share so we can see what those people in the car witnessed. I certainly learned why we’re encouraged to put our phones down and pay attention to what’s happening around us. Good or bad, it’s often worth seeing.