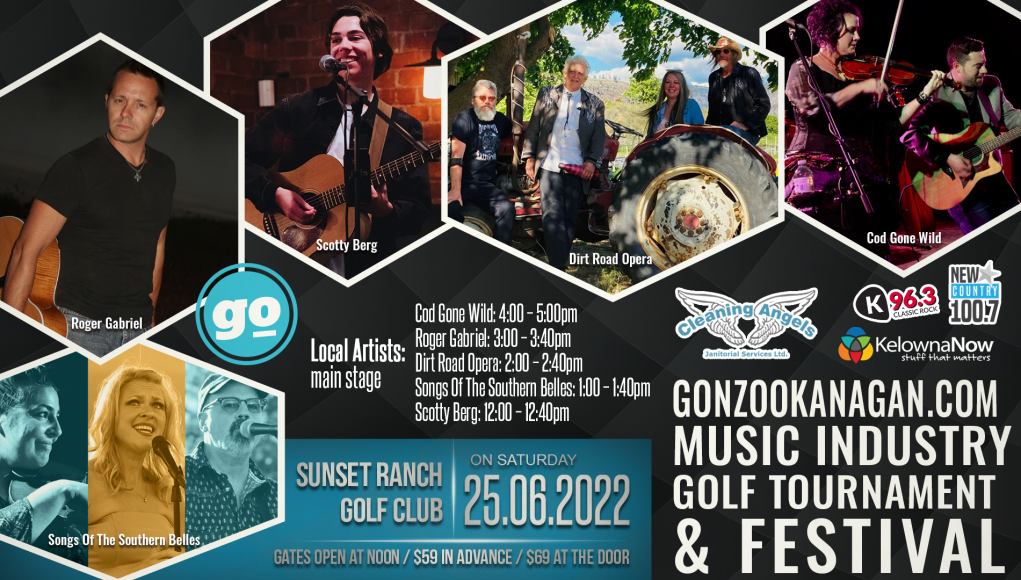 Kelowna, BC (May 4, 2022) – GonzoOkanagan.com is excited to announce the local artist line-up that will be opening for headliners The Washboard Union, Chris Buck Band, and Raquel Cole, on the mainstage on June 25th at the Sunset Ranch Golf Club.

Local talent is what drives the music community in the Okanagan, we are family, and the festival would not be complete without the participation of some of our favorite local bands and musicians joining our headlining musical guests on the mainstage who are also tied to the local community. Scotty Berg is a 15-year-old singer/songwriter from Kelowna, who has collaborated with co-writers of Jennifer Lopez, Luke Bryan, Toni Braxton, and Cody Simpson. To date, Scotty’s Spotify streams have reached over half a million and his songs are played on multiple radio stations globally.  Scotty’s infectious smile, powerful vocals and friendly demeanor make him a favourite with fans in person and through social media. Scotty is managed by Circle11 Entertainment and is a signed artist with Predominant Studios Inc. For more information on Songs of the Southern Belles visit: www.facebook.com/SongsoftheSouthernBelles Based out of Kelowna, British Columbia, Dirt Road Opera‘s journey began back in 2016 when JUNO nominees Rachel Matkin, Barry Mathers, and Jim Ryan once again teamed up to make music.

The three had previously worked together on albums by the Cruzeros, a well-known Canadian country band. Their mutual love of Americana/ roots music inspired them to start writing and recording an album of their own and a year later their debut album Nowheresville was released.

They’re known as the writer, the singer, and the musician. Barry, an award-winning songwriter, Rachel the gifted singer and Jim the classically trained musician who began playing at the age of three. Harmonies are a big part of DRO’s sound and Rachel and Barry’s voices weave effortlessly through their music with Jim’s third part topping it off. Newest member Rob Bailey is a multi-instrumentalist, playing keyboards, guitar, pedal steel, and banjo. After a hiatus from the Okanagan to focus on family, singer/songwriter Roger Gabriel, now a father of three beautiful children, returns to his musical roots in Kelowna to kick off his next tour. Roger’s down-home charm and powerhouse vocals are mirrored in simple, heartfelt lyrics that captivate audiences. Whether he’s singing in coffeehouses or rocking festival stages, Roger exemplifies a true sense of family, community, and connection. He opens his heart with real and honest lyrics every time he puts pen to paper and brings those songs to life on stage with high-energy interactive performances.

Winner of an Okanagan Music Award for Best Country Group (performing as frontman for the Steelwater band) and a nomination for best male performer, Roger returns to the Okanagan to put together a new band for his upcoming tour. He looks forward to showcasing some new material, as well as, performing tunes from his previous album Wide Open (produced by Tom McKillip) which featured Canadian country radio singles I’m In and Unchain My Feet. This Celtic inspired band is focused on giving traditional music a modern edge. They blend the varied talents of musicians whose classical, folk, rock and jazz backgrounds fuse together to create a dynamic and unique sound that instantly connects and resonates with audiences. Through their uplifting energy, tight vocal harmonies, and remarkable stage presence, they weave together a tapestry of tales that evoke a nostalgic experience of days gone by.

Based out of BC’s Okanagan Valley since 2009, after lead singer/multi-instrumentalist Andrew Mercer, transplanted from Newfoundland. With him he brought his passion for Newfoundland, their rich culture and most importantly, the music.

Joining Mercer are musicians Susan Aylard (fiddle), a classically trained violinist, who also currently performs with the Okanagan Symphony Orchestra and has performed all over the world. Sean Bray (electric guitar), a well-respected guitarist that studied at the Manhattan School of Music. CBC Radio named Bray as one of Canada’s top 50 guitarists of all time. Dan Fogarty (bass) hails from Montreal and has been slappin’ the bass for 30 years. Dan is also involved with many live, cover, tribute and recording projects.

We have several local artists performing from 10am-3:00pm right on the golf course tee boxes too! We are incredibly grateful to them them with us on this amazing day of local, live music!! <3

Music has the power to heal and bring us together in celebration! This year more than ever, we look forward to coming together for a full day of music, fun, and laughter. For tickets and more information visit: Gonzo Okanagan/Tickets

More on the Festival headliners here!