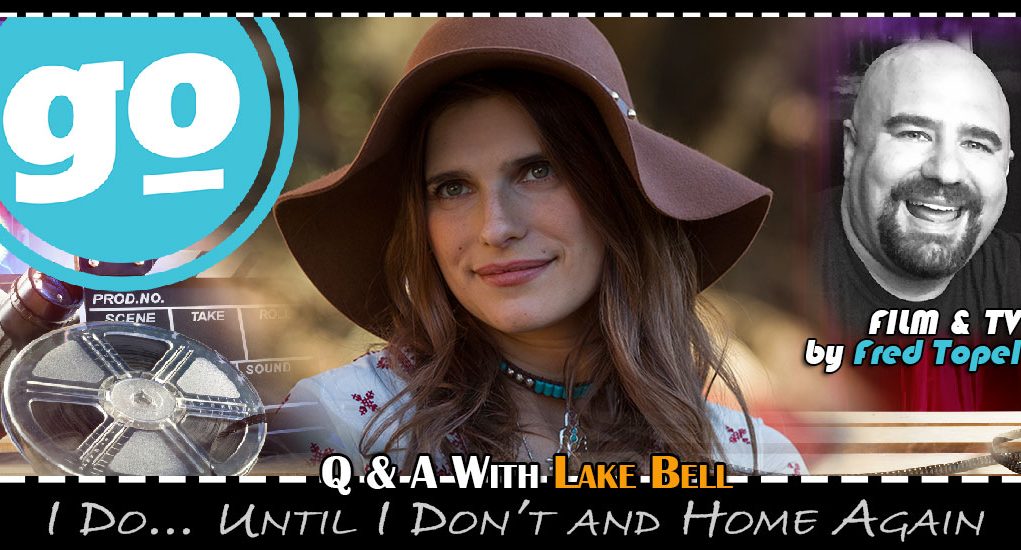 Lake Bell is one of the funniest women in Hollywood so when she writes and directs her own movies, she’s serious about comedy. The star of Childrens Hospital, Wet Hot American Summer and the upcoming Home Again made her directorial debut on episodes of Childrens. Then she wrote, directed and starred as a voiceover artist in the Sundance hit In a World… She’s also the voice of Mr. Peanutbutter’s campaign manager on Bojack Horseman.

Bell’s second movie is the romantic comedy I Do… Until I Don’t. Bell plays one of the spouses a documentary filmmaker (Dolly Wells) is following to try to prove marriage should only be a seven year commitment. The couples, in various stages of marital turmoil, eventually meet and come to their own conclusions. Bell got personal with Gonzo in Los Angeles this month. I Do… Until I Don’t opens September 1. G: Do people know you as writer/director Lake Bell now?

LB: Yeah, sure. I mean, they’d be telling the truth. Multi-hyphenate. You would probably have a better sense of that. At this point, it’s been long enough. I guess I’ve done it enough to merit that.

G: You’re a busy actor. When you’re writing a script, do you work on it between takes while you’re on the set of acting gigs?

LB: It’s funny, In a World, I did do that. Now as life has become wonderfully more complicated, I’m married, I have children. I don’t know if you have kids but there’s a sense of efficiency in the way that you work. My multitasking is a bit more macro. I have to multitask and also keep my house and keep my family healthy as strong. So that’s going on whilst also writing, directing, acting and things, and by the way, health which gets put [off]. No time to go to the dentist, but I think it just makes you more efficient in how you distribute your time and your priorities. Now I write with very specific times where I set up writing time. I feel like that’s my more efficient self. I create little writers retreats for myself.

G: Did you write I Do… Until I Don’t as the relationship optimist or pessimist?

LB: Well, it starts as sort of a cynical take on unionship and long-lasting commitment because really I had a lot to unpack on the subject. Personally, I started writing the project from a place of deep therapeutic investigation of the subject. I’m respectful of it because it seems really a tall order to ask someone to be together for the rest of their lives given that we live nearly to 90 years old sometimes. When the institution was first implemented, it was a ceremony that took place, or wasn’t even a ceremony. It was a contract for maybe land owners coming together. It was just more contractual and less fantastical and ceremonious and romantic. Then it became a really romantic conceit and sure, the idea of it feels beautiful but we live in a time of distraction. We live in a time where it’s hard to remain focused on the relationship so that is what I wanted to investigate. Using the documentarian as the symbol of all these outside forces and distractions that keep us from staying in a sort of steady respectful relationship.

G: I don’t think it’s a spoiler for people to know it has a happy ending, right?

LB: You know, I think it’s okay because here’s the deal: This day and age, we’ve got a lot of negativity out there. We’ve got a lot of tension in our country and in our world. There’s a lot of worry and anxiety. I can attest that the one thing that I can contribute and I feel so proud of this movie for is that it’s a positive message. There is hope and a kind spirit. Just like with In a World…, I wanted to discuss things that I was unpacking myself in a way that was kind-spirited. I think at the end of the day, this movie is more commercial or universal in the sense that everybody’s got an opinion about relationships. At its core, this movie has pretty solid good old fashioned values, which in a way is kind of provocative in this day and age. G: Whenever I hear people say something like “a lifelong relationship isn’t realistic,” I say to me a lifetime isn’t long enough to explore everything I want to with a single person. In your research did you ever hear someone say the opposite of what the documentarian character says?

LB: It’s funny, I was just talking to Tig Notaro who’s one of my best friends. My husband really taught me a lot about feeling this way because I met him in the middle of writing this movie. So it started very cynical and then beautifully and naturally I was smacked in the face with the beauty of this man’s optimism and love. He’s taught me so much about relationships, but Tig was saying, “It’s really interesting when people say that you get married and things get smaller and smaller and smaller. I feel like my world is getting bigger and bigger and bigger because you get to live. The part of searching for who am I going to be with is gone, so then you get to just be with your person and then go do all the things in life that you want to do. That might mean you get through the trenches a little.” In the movie, I say, “I vow to go through the mud and the light with you” and I mean that. In marriage you’re going to get on the floor and get dirty and it’s messy, you’ve got to be honest about everything and it’s just hard. But, when you come out the other end of whatever hardships you’re going through, it’s just like when you burn a field, flowers come after. That’s just part of it. If you have the respect for the relationship. Some relationships don’t work out and that’s okay but if you can at least give the effort to try to plow through the muddy waters, it’s worth it.

G: I say what I said, but I’m turning 40 and I’m still not dating anyone so I don’t know if I’m walking the walk.

LB: Well, you never know when something’s going to happen. Let me tell you, it’s even better to find someone when you’re older because then you know who you are. You search for someone when you’re young and you think, “Oh, I’m going to be with this person forever.” You don’t know yourself very well. It’s possible but it means you really have to be very vigilant about continuing your growth. I hope to inspire people to take a chance. If someone wants to meet you eye to eye to jump full force into having the relationship that you want, that’s what you need. You need someone to meet you eye to eye. They’re saying, “This is the relationship I want. Do you want to do that with me? Yeah, I do too. Okay, good so let’s move forward together.” You don’t have to become one because I think that’s not sustainable. You’re two people who take care of thyself and that’s how you walk forward together side by side.

G: Did you write yourself the shy character to do something new, because you’re usually playing the more outrageous one?

LB: True, I definitely wanted to play Alice because she was something that nobody would cast me as. In all of my characters in this movie, there’s a part of myself in it and all very, very truthful to me. There’s a lot of me in Alice but it’s a side of me I don’t show. Alice has a sort of countenance of apology. She’s always apologizing for the space she’s taking up and that is not me. I relate to her deeply and I think that ultimately, her real goals are just to be seen in her relationship. Sometimes we’re so close to each other in a relationship because we’ve been together for so long that you almost can’t see each other anymore. You take each other for granted and that is dangerous. To answer your question, of course. I like to write myself characters that perhaps people would not normally cast me as.

G: You’re back on Bojack Horseman. Did you know they had big plans for the campaign manager last season?

LB: No, I did not at all. It was really a happy surprise.

G: Was it fun to make fun of politics?

LB: Absolutely. I think those guys are so smart and they’ve got that whole silly wit thing going. It was great to be a part of it.

G: Do you play Katrina Peanutbutter as a person or an animal?

LB: I play her as a person. G: Did you have to have a Lake Bell mask made for Wet Hot American Summer: Ten Years Later?

LB: Oh, yes. God, disgusting. Those masks were so vile. I was also super pregnant while shooting all of Wet Hot American Summer. We masked that. I’m sure you can see some of it. I was also pregnant for Home Again and I’m not supposed to be. That was really fun and that mask was really creepy.

G: Are you a funny character in Home Again?

LB: I’m a bitch. I’m a raging bitch so that’s fun for me because I get to play a good old fashioned bitch. That’s a smaller character but definitely was a blast to do.

G: What comedy are you watching right now?

LB: Veep and John Oliver. Those are my go-tos.

G: What are your favorite rom-coms? What vibe were you going for?

LB: Look, I am unabashedly a Woody Allen fan. It just never gets old for me. Movies that I look to are Bob and Carol and Ted and Alice, Paul Mazursky. So Paul Mazursky and Woody Allen. I just watched Moonstruck too. I guess I harken back to movies that warm my heart and make me feel nostalgic. Woody is the master of that.

G: He also has a much more cynical take on relationships than your film.

LB: That’s true, but that’s okay. This is my first chapter of my relationship stories. As I grow and as I have more kids, I have two kids now, as I am married for longer I’ll have more and more to say about it. This is a movie that represents me right now, how I feel about it and where I am in that creative investigation.

“I DO… UNTIL I DON’T” is IN THEATERS NATIONWIDE! Tickets: http://tickets.idountilidontmovie.com/