Alex Nedeljkovic is probably the only person in North America who wishes he’d never heard the name David Ayres.

Whether you like or hate hockey you pretty much have to have been in a coma this past week to not have heard about the fairytale antics of David Ayres. On Saturday night Ayres went from being a Zamboni ice cleaning machine driver to NHL goaltending heroe in a blink. (Actually- updated facts suggest he is no longer ‘just’ a Zamboni driver but actually now an arena manager – but, hey, never let the facts stand in the way of a good story).

Regardless of his off-ice job (figuratively speaking) Ayres’ brilliant rise to stardom and world-wide, household name attention is truly one of those unique, almost unbelievable stories that inspires a writer to say, “You can’t make this stuff up.”

The Carolina Hurricanes were visiting the Toronto Maple Leafs in a key game for both clubs desperate to make the playoffs. Leaf starting goalie James Reimer went down early with a ‘lower body’ body wound and then back-up goalie Petr Mrazek wound up with a concussion following an explosive hit between himself and a Maple Leaf forward pursuing the puck. With neither regular goalie able to play due to their injuries Ayres was brought out of the stands and into the game. When Ayres stepped between the pipes for the Hurricanes the club held a 4-1 lead in the second period. While Leaf fans watched with vulture like anticipation Ayres promptly allowed two goals on two shots. The lead was down to 4-3 entering the third.

Everyone was expecting a rout by the Leafs. Everyone, that is except Ayres.

“I knew after the second period that if the Canes scored one more I could keep them in the game,” Ayres said later.

The Hurricanes could easily have taken a pounding or let the their victory slip away, certainly the perfect excuse was already drawn up. Instead they put together a textbook example of puck control and defensive play. Meanwhile the Leafs seemed to squeeze their sticks too hard and choked. After clearly outplaying the Maple Leafs the entire third period Carolina secured the important two points from the win.

For Ayres the entire scenario was a dream come true. The 42-year-old kidney transplant survivor stopped eight of 10 shots in his 6-3 win at Scotiabank Arena in Toronto, becoming the oldest goalie to win his NHL debut and the first emergency backup to win an NHL game. Ironically Ayres, who occasionally plays practice goal for the Leafs returned to the rink the next day taking part in the Leaf’s workout. The players were actually nice.

Following the practice though Ayres departed on a whirl-wind tour about the continent making guest appearances in  numerous cities due to his sudden stardom. Ayres appeared on numerous talk shows including a humorous appearance on the Stephen Cobert show, a guest appearance at the next Hurricane home game where he was named an ‘Honourary Carolinian’, and had a day celebrated in his honour in the state. The appearances and honours continue to pour in within no sign of ceasing in the near future.

While life continues to be absurdly cool for Ayres, reality somewhat returned to the NHL. On the following Monday the NHL went through a day long body swap known as the trade deadline with players moving around from team to team. The Hurricanes smelling playoff possibilities picked up three key players from other clubs adding skilled forward Vincent Trocheck and talented defensemen Brady Skjei and Sami Vantanen.

Ironically, the Leafs made just one minor league addition, with their big news a four year contract extension to veteran defenseman Jake Muzzin. Jake broke his wrist Tuesday night and will be out four weeks – or just long enough for the Leafs to likely miss the playoffs without him in the lineup.

However, the Ayres story has an additional epilogue worthy of note. Tuesday night, with both starting goalies still injured the Canes brought up their farm team goalie Alex Nedeljkovic to play.

Nedeljkovic, as fate would have it, struggled all night allowing four goals in just 16 shots as the Canes lost to Dallas 4-1. Half way through the night the Cane’s home-ice crowd started chanting, “We want Ayres”. 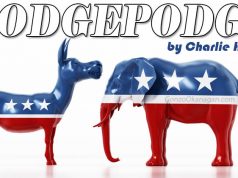