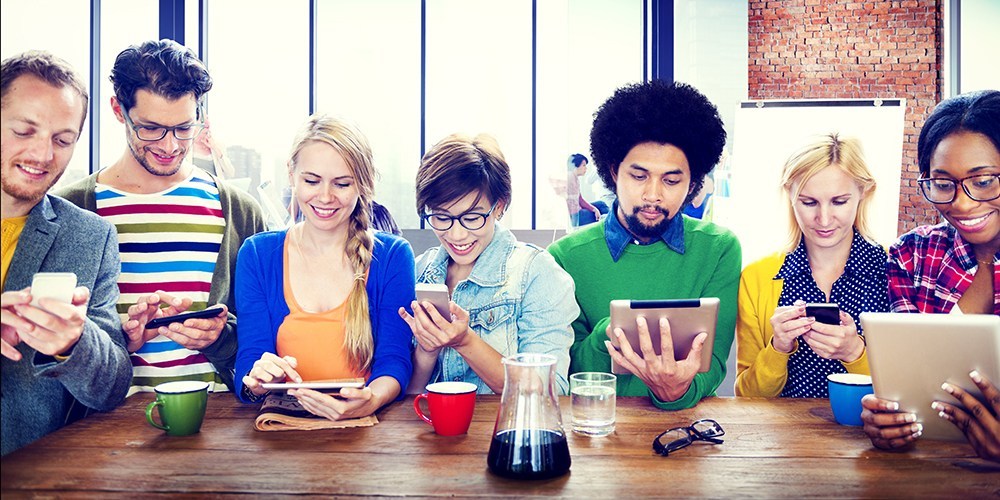 Get Off My Lawn! with John Kereiff: DARE TO DREAM

“Every great dream begins with a dreamer. Always remember, you have within you the strength, the patience and the passion to reach for the stars to change the world.” – Harriet Tubman

For a number of years now, I have become increasingly baffled at the way society assimilates technology; how we’ve become preoccupied with it and how we demand to be stimulated every moment of every day. I was reminded of this at work the other day- I’m a cashier at a fast food restaurant- when a customer stepped up to my till to place an order while carrying on a conversation with someone on her cell phone. The phone has certainly turned out to be an instrument of rudeness.

I see people everywhere looking down at their phones, oblivious to the world around them, totally absorbed by text conversations, watching videos, checking Facebook to see how many people have commented on their latest post (or selfie), seemingly living their lives virtually through those tiny screens. And it’s not just ‘the kids’ either- I’ve caught people my own age at it, thinking they should know better. Full disclosure- I’m guilty of this very sin myself on occasion.

It’s not just the phones; it’s our culture of overstimulation in general. Video games- millions of people play them every spare moment they can find, and it’s become a multi-billion dollar industry. They even make movies based on video games- how demented is that? Then there’s the TV watching thing; it’s become some weird badge of honour to be obsessed with a TV show like Game Of Thrones or The Walking Dead, and the term “binge watching” has entered our lexicon to the alarm, it seems, of no one but me.

I like to be entertained as much as anybody by a TV show or a good movie, but I also like to let my mind out to wander. It’s important to embrace the downtime rather than always filling it with meaningless activity and distractions. Other than listening to music, daydreaming has always been one of my favourite things to do. It was during a lull at work that I began thinking about the subject for this week’s column. I also think about my weekly United DJ Radio show during spare moments, figuring out the right song to start with and how it will help form the rest of the programme. It’s also why I spent over 20 years writing radio ads at stations throughout BC and Alberta until being laid off in 2016. I had some ethical struggles with advertising itself but the craft of writing and the act of creating was thrilling. In all those years, I can honestly say there was not a single day that I did not look forward to going to work. Though disputed, Confucius is credited with saying “Choose a job you love and you will never have to work a day in your life.” Regardless of who said that first it’s true- trust me, I’ve done the research.

Social media is not bringing people closer together. If anything we as individuals are becoming increasingly isolated, even encouraged to become so. Look at the explosion of companies like Amazon and Wayfair- you can shop for anything without leaving the house! Why go out to a restaurant when you can just call Skip The Dishes and have them bring food right to your house? I recently stopped shopping at the local Wal Mart because they’ve removed a number of traditional tills in order to install 16 “self checkout” stations. Answer me this; when you use these things, are you being paid a wage? Do you get a discount for checking the items through yourself? No- all you’re doing is taking away somebody’s job so the corporation can fatten the bottom line to please their shareholders. During a visit to Sobey’s last weekend to pick up a few things on my way home, a nice and helpful store employee tried to direct me to their self checkout lane as there was only one cashier open. “No thanks” I replied pleasantly, “I’d rather wait.” A stink or a scene was not made, but my intention was clear.

If we don’t allow ourselves the space and time to dream, where will the next Beethoven, Springsteen or Zeppelin come from? With the implosion of the music industry- it is now acceptable to take music for free or pay a fraction of a penny for it via streaming services- will anyone even want to try? If Van Gogh were alive today and his face buried in a phone instead of observing the world with wonder, there would be no “Starry Night”. We need artists, these dreamers of dreams, to help us appreciate not just the beauty we can see and hear all around us, but to find the beauty our existence suggests is there, and to perhaps pick up a brush, a camera or a guitar and try creating some ourselves.

Overstimulation is a slow acting poison that is robbing us of our ability to dream the big dreams. Video games will become more advanced and absorbing, and there’s always a better phone or tablet just around the corner, but the temptations they offer can be resisted if you have the will. It’s not like I don’t have a relationship with technology, I do; but I also try to limit my engagement.

VIDEO GAMES: Sorry, just not interested in working that hard to entertain myself. I haven’t played Super Mario since the original Nintendo platform in the 90’s and know nothing of gaming since. I play Tetris online occasionally to relax, but that’s it.

CELL PHONE: I have an I Phone 5 that I’ve had for maybe 4 years, nothing before that. Other than texting family (with one thumb), the occasional rare phone call or checking Facebook or Gmail while waiting in the doctor’s office, it pretty much stays in my pocket with the ringer off. People that know me (even my cardiologist) know that, if it’s important, to leave a message. If I think it’s important, I’ll return the call.

COMPUTER: I’ve never had a tablet or a laptop, nor ever wanted them. I am typing this week’s column on an eight year old Dell desktop (had to get the hard drive replaced earlier this year) that suits my needs. I have iTunes (I like to purchase music, not stream it) and over the last year have burned all of my cd’s (5,000 or so) to an external hard drive. I have an old copy of Adobe Audition 3 to edit my UDJ radio show.

SOCIAL MEDIA: The only one I use is Facebook, to stay in contact friends and acquaintances. It’s been pretty cool for finding people from my past like Kenny Reynolds, my best friend when I lived in Ottawa in the late 60’s, but it doesn’t occupy that much of my time.

TELEVISION: I’ve enjoyed many shows over the years, but even with something I love, binge-watching feels unhealthy. Some of my favorites have been The Sopranos, Breaking Bad, Lucifer and Supernatural, but once I’ve seen them it’s time to move on. I DO own The Sopranos on DVD and have attempted several times to re-watch it, but always lose interest somewhere in season two. I enjoy watching Big Bang Theory reruns on occasion. My current TV viewing involves the CTV News Channel, Wheel Of Fortune and Jeopardy and the occasional home improvement show, or movie but that’s it.

Can I suggest just a few things for you to try, just to see how they feel?

Instead of constantly texting your buddies, arrange to meet for a coffee or a meal- any excuse to get together face to face- and leave your phones in your pockets for the evening, ringers off.

Instead of ordering that lamp, or furniture, or book, or vinyl album or clothing from Amazon or Ebay, search out local stores that might have those items and visit these establishments- I’m sure they’d be glad to see you. You might find something even better and even if you don’t, you’ve ventured out into the world.

And, when you find yourself outside under a clear and starry sky put the phone away, look up… and dream.

That’s all I have to say… now get off my lawn!