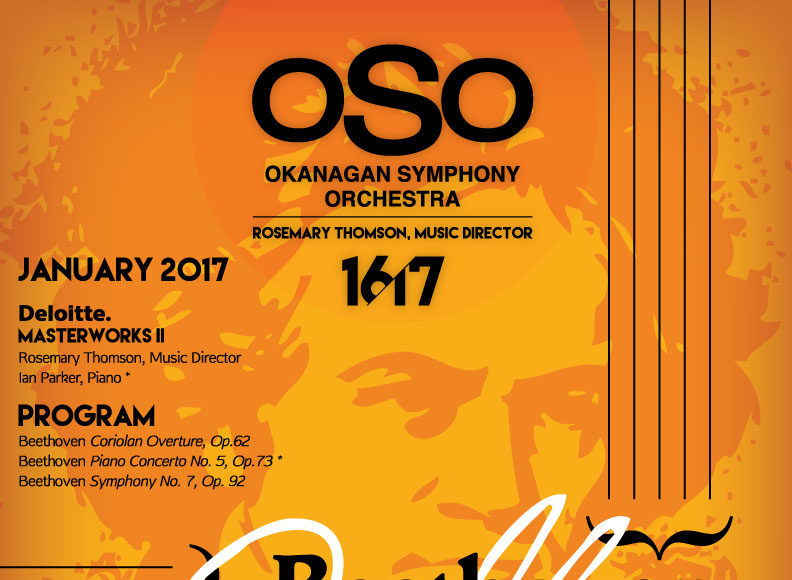 (Kelowna, BC, January 10, 2017) – The Okanagan Symphony Orchestra (OSO) welcomes the talented Ian Parker back to the Okanagan to join the OSO on stage January 20-22.The concert opens in Kelowna on Friday, January 20 at 7:30pm (doors open 6:30pm) with additional performances in Penticton Saturday, January 21 at 7:30pm (doors open 6:30pm) and Vernon on Sunday, January 22 at 7:00pm (doors open 6:00pm). Tickets are $56.25 for adults; $49.00 for seniors and $26.75 for youth and are available for the Kelowna concerts by phone through Kelowna Tickets in Orchard Park Mall or phone 250.862.2867, Penticton performance  by phone 888.974.9170 or in person at the Shatford Centre and the Vernon & District Performing Arts Centre phone 250.549.7469 or online via www.okanagansymphony.com.“Beethoven was a genius. His music kicked open the door of the romantic era imbuing the orchestral sound with more power than it had ever had before,” comments Rosemary Thomson, Music Director Okanagan Symphony Orchestra. “We show off his many moods from the drama of the Coriolan Overture to the exhuberance and great beauty of the Symphony No. 7. Okanagan favourite Ian Parker returns for the “Emperor” Concerto where the OSO will race him to the end!”Magnetic, easy-going and delightfully articulate, Canadian pianist Ian Parker captivates audiences wherever he goes. He has appeared with the philharmonic orchestras of  Buffalo, Calgary and Louisiana, the Cincinnati Chamber Orchestra, the Cleveland Orchestra at Blossom and the symphonies of Cincinnati, Edmonton, Honolulu, Kitchener-Waterloo, Long Beach, National/Washington, D.C., Quebec, Regina, San Francisco, Toronto, Vancouver, Victoria, Virginia  and Winnipeg, among others. An enthusiastic recitalist, Ian Parker has performed across the United States, Western Europe, Israel, and throughout Canada on tours with Debut Atlantic and Jeunesses Musicales du Canada. He made his Lincoln Center recital debut at the Walter Reade Theater in 2004.  Among his appearance in the current season, Ian Parker will play recitals presented by Camerata Musica and the North Okanagan Community Concerts Association. He will also perform with the Vogler Quartet in a concert presented by Chamber Music Vancouver, and will collaborate for the first time with the Borealis Quartet during a tour of the Vancouver islands.“The OSO is also excited to welcome The Honourable Judith Guichon, OBC  Lieutenant Governor of British Columbia who has bestowed the Okanagan Symphony Orchestra with Honourary Patronage.” states Thomson.The Okanagan Symphony Orchestra is the third largest professional Symphony Orchestra in British Columbia;  entertaining residents of the Okanagan Valley and visitors from around the globe with symphonic music since 1960. To learn more about the Okanagan Symphony Orchestra visit their website at www.okanagansymphony.com or follow at www.twitter.com/OKSymponyOrch or www.facebook.com/OkanaganSymphonyOrchestra. See it, Hear it, Love it!