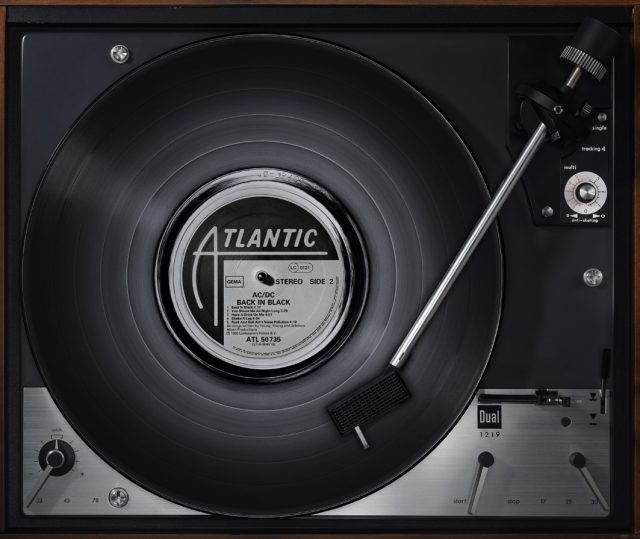 In 2010, a small factory in Cleveland started pressing vinyl records. Why does that matter? Because Gotta Groove was the first new vinyl pressing facility to  come out of the United States in a    long, long time.

…Somehow, a group of smart, experienced people got  together and decided there was money to be made  pressing vinyl. What’s more, they got other people to   agree and give them some money. Apparently, records are good business again. So, how did we get here?

First,a quick history lesson. Records – wax and then vinyl – were the dominant medium in the recording industry for nearly a  century. Record companies were blissfully cranking out 33’s, 45’s and 78’s until 1988, when, for the first time, compact discs out sold vinyl records. Vinyl never recovered. Compact discs are  easier to make, easier to handle, and easier to take for a walk.  You can store more music, at a higher quality, for a better price, on CD than on vinyl. Ten short years later, compact discs were  squashed by digital music. Digital music is audio converted to  ones and zeroes. The advent of Mp3, an audio encoding  format, and the rapid growth of peer-to peer music sharing networks,  made free music a hard reality. Anyone could turn on their desk top and get whatever music they wanted instantly. Physical music distribution became a liability. Sales dropped, then  plummeted as the industry stumbled around, waging war on  their old customers.

New distribution channels, digital and outside commercial  control, were the only sources of growth in a stagnating market. Music you could put your hands on was dead.

But then something unexpected happened. A revival. While digitalformats are convenient, and instantaneous, the sound quality is  poor, and they hold little collectible cachet. Digital cannot replace the personal connection; having a piece of your band that is  yours, and yours alone. A response formed in that intersection of youth and DJ culture. Artists experimented with turntables and records and transformed them into new art forms. Beat making
(sample based music production) and turntablism, (using turntables as an instrument to create new compositions), became the  new underground. Video sharing on YouTube  meant you could  watch the best battles and learn the newest tricks, at home, with  your friends. Records started to  represent something. They were a tangible connection to your heroes. Sample based musicians creating music from dusty gems found on old vinyl gave records a whole new appeal. Record collecting was a movement. All of a sudden, vinyl had soul. And new vinyl did too.

A box of 7-inch singles can be sold at a live show. Those same  singles can then be sent to everyone who contributes to the  newest recording  as a way of saying thank you, and again,  tying fans and your artists closer together.

Most new LP’s are released at double or triple the price  of their digital counterparts. And yet, vinyl sales have risen
steadily over the last ten years. Audiophiles  will tell you they

prefer vinyl because of its warmer, vacuum-tube sound. Dig a  little deeper, though, and you’ll find a surprising lack of detail on the specifics of the vinyl sound. Most can’t tell  you exactly why  it sounds so good. No doubt, the dedication it  takes to acquire  both the records and the equipment to enjoy them, plays a big, big part. But there is also a value-add element to new release LP’s. Artists can package their releases in  limited edition runs and include exclusive studio footage, photographs, lyrics  and art. As a fan, you get that  warm vinyl sound, but you also  get a very rare piece of your favourite band.

Sample based musicians creating music from dusty gems found on old vinyl gave records a whole new appeal. Record collecting was a movement. All of a sudden, vinyl had soul. And new vinyl did too.

In a media-saturated world where all information is instantly transferable, having unreleased material, in your hand, is differentiation.  Established artists who are able to  combine that differentiation  with the new distribution channels  opened up by the digital rise, have reaped benefits. David Byrne and Radiohead’s ‘pay-what-you want’ album, In Rainbows, sold  nearly 45,000  copies, becoming the number one selling  vinyl LP in 2009. Trent Reznor sold 2500 limited edition packages  of his four-part release, Ghosts, in less than a day. That netted him $750 000.

What does this mean for the thousands of newly independent musicians and record labels? Packaging vinyl with new releases  requires an increased initial investment, but will demonstrably  add value. Distributing music on vinyl is still fresh, and that novelty can help sell your music and lift you out of a sea of competition.A box of 7-inch singles can be sold at a live show. Those same  singles can then be sent to everyone who contributes to the  newest recording as a way of saying thank you, and again, tying fans and your artists closer together. Dap-Tone, home of Sharon  Jones and the Dap-Kings, is probably the best example of the  successful, independent vinyl label. It’s founder, Gabriel Roth, took an obsession with authentic, retro soul and crafted his  entire label around it. He uses analogue taping techniques to  create a sound that can be truly experienced only on vinyl.

Dap-Tone promises fans who buy CD’s that their secret is safe, no one will need to know they cheated on vinyl. Digital cannot  replace the personal connection; having a piece of your band  that is yours, and yours alone. A response formed in that  intersection of youth and DJ culture. Artists experimented with turntables and records and transformed them into new art forms. It’s clear that if done right, there is profit in vinyl.  In the last
decade, sales have steadily increased and the numbers are starting to penetrate major label consciousness. Vinyl is a legitimate and effective distribution and marketing tool. So  where are all  the new records? The problem is production  capacity. It is still  practically non-existent where records  are concerned. The  last pressing plant in Canada closed  down two years ago, and  there are  only fourteen small  plants in the whole of the United States. Vinyl pressing  equipment was last manufactured more than 30 years ago and is prohibitively expensive to acquire, set up, and maintain. That’s  why new pressing plants,  like Gotta Groove, are essential to the resurgence of  vinyl. Unless new technologies are developed  for cheaper manufacturing, the vinyl  market will stay limited  to those who wish to put up the extra  expenses because they believe pressing their music on records is  worth the investment.

Bio: Nocturne Records is an independent music record label  launched in 2008, by Miran Nevesinjac and Josh Furey.  For  more details, check out www.nocturne-records.org.