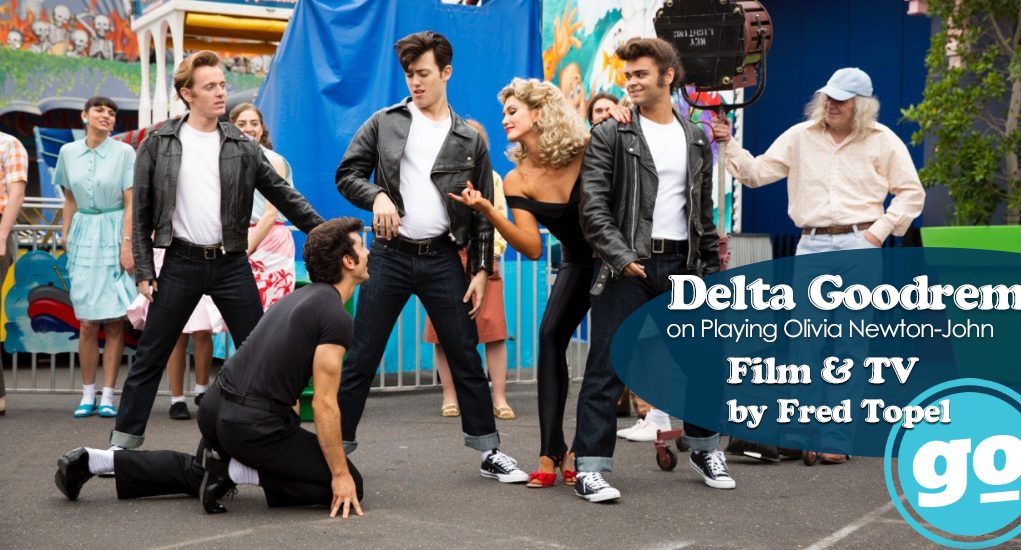 Delta Goodrem on Playing Olivia Newton-John and Her Own Music

Anyone who plays Olivia Newton-John in a biopic is going to get on my radar, but I’m so glad it was Delta Goodrem. After seeing an early screener of her Liftetime movie Olivia Newton-John: Hopelessly Devoted To You, I discovered her original music too. Her bombastic piano and angelic vocal melodies really spoke my musical language.

Gonzo: Had anyone compared you to Olivia Newton-John as you rose as a singer?

Delta Goodrem: I did. She was such a huge influence for me throughout my whole life, so I felt like I had been preparing for the role my whole life because she’d been such a huge part of it. You know, musically and I think as an Australian girl, you really look to her and just love the grace, humility and strength. I really loved her so much I took this with great pride.

G: Did you already have a lot of practice singing along to Olivia Newton John?

G: Was it quite different doing them in the studio and on the set?

DG: You know what? There was just such joy. I always say I can tell everybody there’s only one Olivia Newton-John, and there’s only one and only. But the fact that it was quite a celebration, when we got dressed in the outfit, because it was such an iconic outfit and moment that you feel like it’s been a part of your heart, as if it’s been a part of you, something that you had seen and brought you so much joy that when we got to film it, you couldn’t wipe the smile off my face. I felt like it was Christmas.

G: They’re not in the movie, but would you sing Summer Nights and other Grease songs too?

DG: Absolutely. All the songs, obviously because there’s only so much time, but on the soundtrack we had Magic, Xanadu, we had Physical. We had all these songs that all of a sudden you realize that they’d been through so many decades and have influenced different generations. I had a ball even discovering the ‘60s songs.

G: And now you have a whole album of Olivia Newton-John covers?

DG: Yeah, the fact that during my own concerts, I can actually say, “Hey, I’m going to sing a bit of an Olivia song,” I feel like it’s a complete blessing. It’s funny, because when I got to do Cats, the musical in Australia, getting to sing Memory every night, I was thrilled. Now I get to do Olivia songs. I’ve written my songs my whole life. It’s about time I get to do other people’s songs for fun so it’s great.

G: I’ve discovered your original music now. How has your music evolved from Innocent Eyes to Wings of the Wild?

DG: I feel, I was a 17-year-old and 18-year-old in that time. I did have innocent eyes on the world. A lot has changed since then. I feel this last record was another defining moment in Wings of the Wild. I’m continuing to grow and I’m kind of excited for the next record. I’ve always loved fantasy, ethereal sort of nature, but I feel as time goes on, you definitely see the different grounding of things. I’m excited to write about that for the next one but it definitely changes.

G: Even musically, have you explored different sorts of instrumentation and how it goes with your voice?

DG: I feel like I definitely kept my own space for a while in my own lane, but I definitely feel at the moment I’m definitely on a discovery path. I have found certain albums, I definitely went and got a little more orchestral, got a little bit more but I’m always at heart a piano girl. At the end of the day, I sit down at my piano, that’s where it all starts. I write the song. I love bombastic cinematic music. That’s always been me but at the core of it, it has to have a message of empowerment and hope.

G: Are you by any chance a fan of composer Jim Steinman?

DG: Yes, I mean, that’s the thing. That fact that in L.A. you can also watch the Philharmonic orchestra, the fact that I can go take a night here, it’s all so accessible, that’s pretty exciting. Throughout my life, LA’s quite the hub to be.

G: Has Olivia seen the film yet?